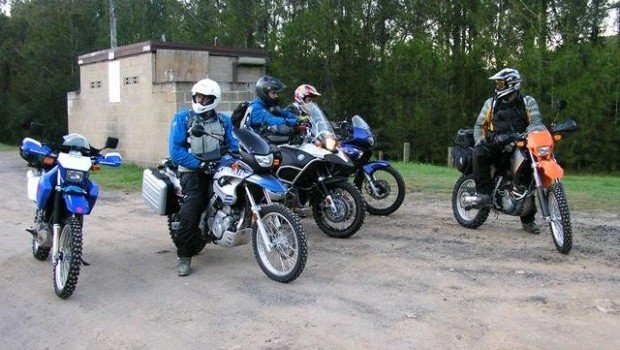 THE WRONG WAY DOWN

The plan was for the BIKE ME! Supreme Riding Soviet to ride to Phillip Island from Sydney — on the dirt. A journey of some 1200km over some of the most beautiful and brutal terrain the Great Dividing Range has to offer. We had three days to do it in and five riders to make the attempt. At the end of three days, one rider was in hospital with a horrific injury, one bike was unrideable, and I felt like I’d been pack-raped by Lebanese grizzly bears.

We were loaned three motorcycles for the journey — a Suzuki DR650 (AMCN’s long-term test bike), a Honda Transalp and a BMW F650 Dakar.

Miles Davis, BMW’s Marketing Manager, agreed to come along as well (thank God) and was astride a fully loaded GS1200 Adventure and Dave Smith was on his personal KTM 640.

The DR was fitted with dirt-biased tyres, as was the BMW, while the Transalp came with tyres that were more evenly balanced between road and trail, but given that it was outfitted with Touratech panniers, fairing rails, a tankbag and a headlight protector, the rest of it certainly looked the business.

The Dakar came with BMW panniers and the full glory of German technology, ergonomics and ability.

The DR? Well, the Good Doctor was a bit of a supertanker, outfitted as it was with a giant 30 litre plus Safari petrol tank, but other than that, it was stock.

Mick was allotted the BMW on the basis that he’d owned an HP before and knew sort of what to expect from the beast, and had a fair amount of dirt-riding experience. Ian Buckley scored the Transalp on the basis that he’d worked for Honda in a past life and had the most dirt-riding cred of us all, and should therefore be given the most street-oriented bike (and thus the most difficult to manage in very rough terrain) to pilot.

I scored the Suzuki DR based on the fact that I was crap at riding dirt and should be given the easiest-to-ride-in-rough-bits and most dirt-oriented bike of the three. And I had more tattoos than anyone else.

They proved to be wise choices.

“Well, that was the plan, anyway…”

It is simply not possible to get to Phillip Island from Sydney without having to transverse some bitumen — about 300km of it, in fact. That left us with about 900km of dirt to do — much of it benign and easily manageable and some of it so nauseatingly difficult and heart-breaking it made my head spin with nausea. We’ll put up the GPS-plotted Way Points as soon as we’ve got them available for uploading, but here is the schedule (which fell apart on Day Two) and the route, which was mostly adhered to except when the machinery and time constraints forced us to make running changes.

Then it is all bitumen to the Island.

Well, that was the plan, anyway…

“I wore an O’Neil Threat helmet which I am going to smash with an axe this evening ‘cos it is the most uncomfortable lid ever made.”

Do not even attempt this without the right gear. One mistake and you’ll be a small story in the papers a few weeks after they find your rotting corpse. The right gear isn’t just boots, pants, a jacket and thermals (though when it’s 6 degrees on the mountains and 25 in the valleys, you will appreciate good clobber).

For adventure riding, an EPERB (Emergency Personal Beacon) is a must, as is food, full Camelbacks and a satellite phone. Spare tubes, tools, patience and a tendency not to panic is vital — and a sound knowledge of first aid and a first aid kit is indispensable. Your way will also be a lot easier if you have a GPS system pre-plotted to your route, though maps may still be required and you’d be mad not to take some good topographical ones. We did and we had to use them when the GPS systems disagreed with one another. 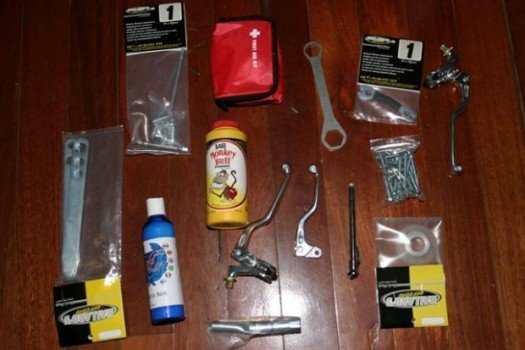 Geoff Ballard provided us with a goodly array of gear, including my awesome Ballard Jacket (made to be worn over armour, beautifully vented and possessed of the softest high-collar I’d ever worn. It’s meaningfully good gear) and some Fox overpants, which I wore over full body armour, and some O’Neil motocross pants and boots.

Geoff also gave us tyre levers which were used, a first-aid kit (which we used), Monkey Butt Powder (which we used), and muscle-rubbing liniment (which is being used as I type). Mr Ballard has some experience with the type of riding we had to do and was full of advice and helpfulness and I encourage you all to view his catalogue and avail yourselves of his great gear.

I wore an O’Neil Threat helmet which I am going to smash with an axe this evening ‘cos it is the most uncomfortable lid ever made. My Crowbar MX goggles were sensational in low light and heavy dust and I had Ballard’s no-blister-and-extra-warmth under-gloves on under O’Neil motocross gloves and my pair of glorious BMW winter gloves on for the freezing parts. And I did use all the gear at various times.

I also went out and bought the best thermals on earth. They are called Icebreaker and they’re made in New Zealand from pure wool. You can wear them for weeks on end without smelling like a dead horse’s sweat-filled arse (seriously) and I cannot recommend this product enough. You can buy them in mountaineering shops and they are worth every cent of their $70 (for long underpants) purchase price. I also splashed out on a pair of waterproof socks called Sealskins, which I also bought at the mountaineering shop. Incredible product which kept my feet dry through river crossings and are thick enough to be very comfortable and even relatively warm. There are insulated versions which are truly warm, but I couldn’t afford the $90 they cost and settled for the $70 pair.