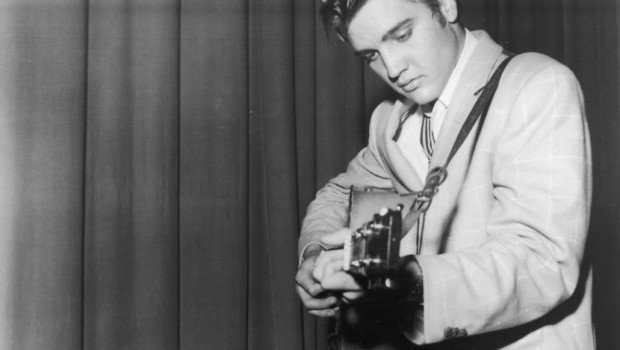 THE KING AND I – PART THREE 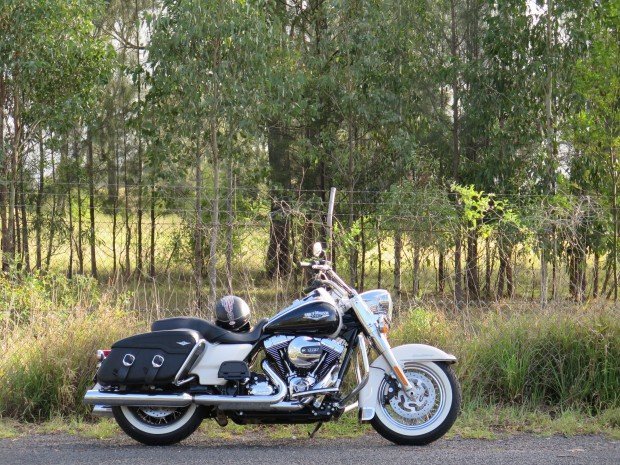 Do I have to tell you that a wise man does not go tear-arsing around the place during the Dark Times? Which any period of double demerit points foisted upon us by our keepers and which are sold to us as being in our best interests should be rightfully known as.

No, I guess I don’t have to tell you either of those things.

Thus, on the first Saturday following Christmas, the King and I set sail for Buxton and the warm and leathery hospitality of Peter Richer of DV8 leathers. 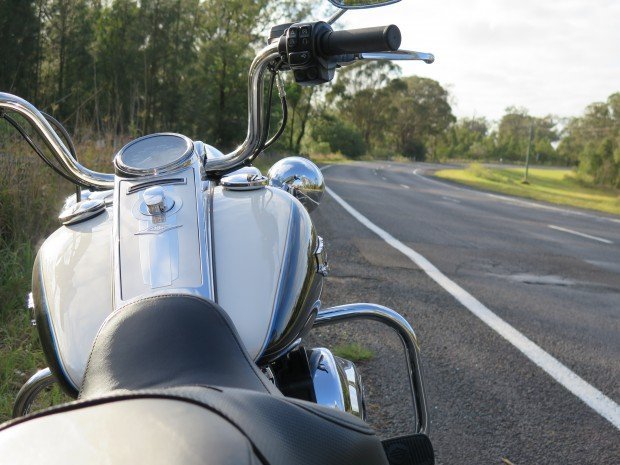 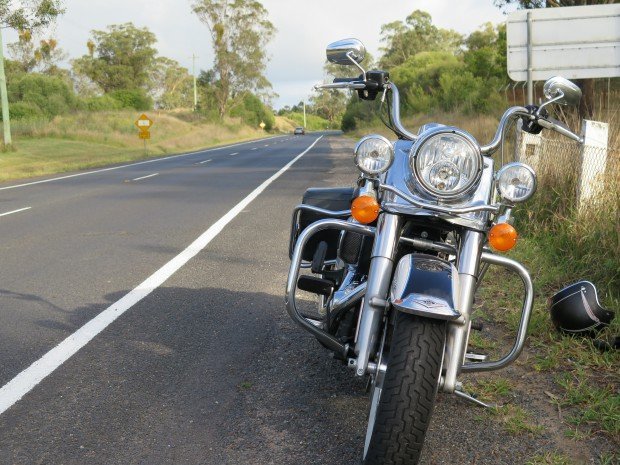 Two things. One is you shouldn’t leave your lid on the grass. Long-leggedy spike-faced horrors crawl into it. The other is that is one of the very best headlights on any roadbike on the market today.

Buxton, if you don’t know, is a tiny little village only some 20-odd kays the other side of Picton. So it’s not a big ride outta Sydney.

Still, it does include the legendary Razorback section of road – which is no longer what it was once trumped up to be, and up and down which my friends and I would race upon our motorcycles in between returning to Picton for fresh schooners and lies about how fast we were doing its bends.

The Razorback was once one of those pieces of road Sydney motorcyclists did as they earned their stripes. If I was to be honest, it was never all that great, fundamentally because it was not all that long, and coming from Sydney, you’d barely got the tyres warmed up before you were coasting down the hill into Picton. But we told ourselves it was great and rode it like crazed swine. 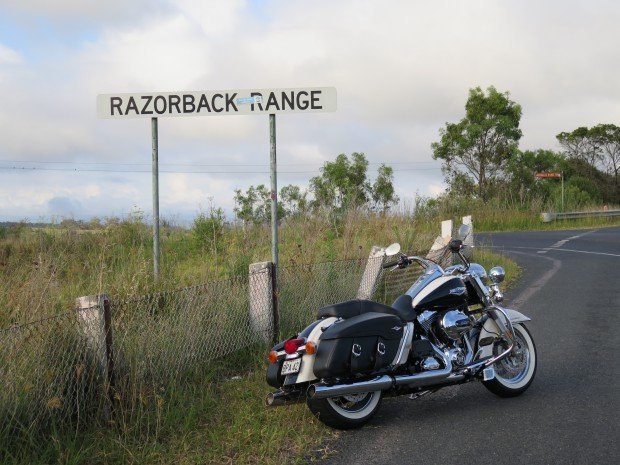 That sticker over the R states “For the love of beer”. 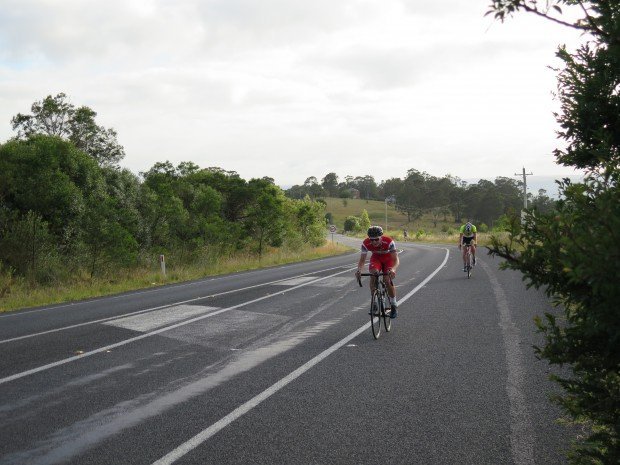 No, the bikie standing in the breakdown lane taking pictures did not move out of the way.

This is no longer possible. But only because the Highway Patrol seems to hang out there with maddening frequency and often in several cars. And yes, I have been booked there many times, so I tend to observe its 80km/h…um, usually.

This Saturday, I had already been breathalysed at 0730 just outside of Camden by what looked to be the sum total of all of south-western Sydney’s Highway Patrol battalion, and it was obvious from the sour expression on the constable’s face that he was dreadfully disappointed that I wasn’t reeking of piss at that time of the morning.

So as I tooled on towards the Razorback, I was pretty sure it would be cop-free. 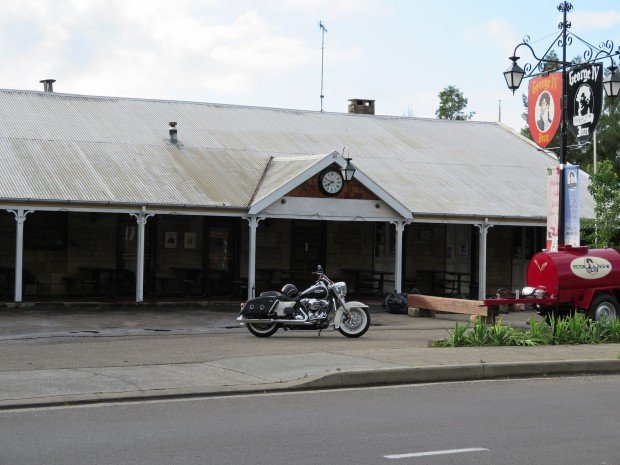 Closed as a nunnery during Lent. Wretched Christian licencing laws. 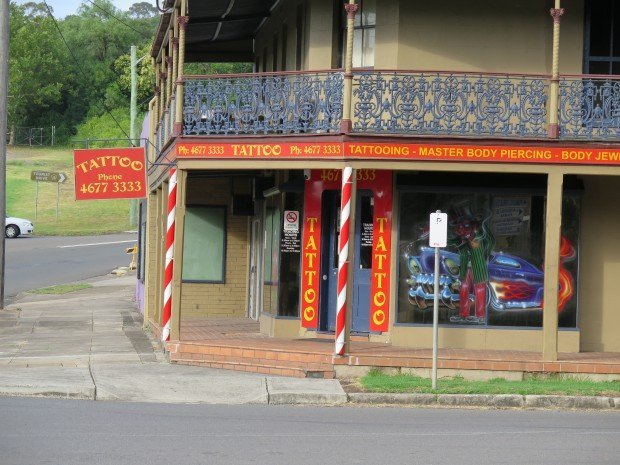 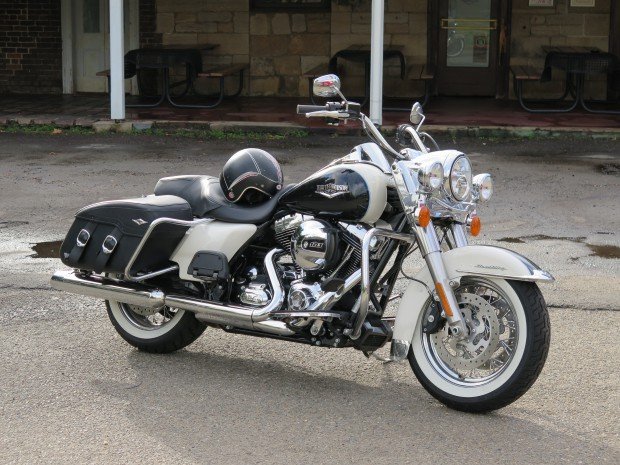 If there were women awake in Picton, they would have been all over the King and those puddles would not be full of water.

The sun was shining, the King was thrumming his baritone notes at the world, and I was hoping a wasp wouldn’t lance me in the face with its arse-knife and shit-up my day.

Naturally, there was a smallish peloton of lycra-ed shitbags wobbling up the incline, and spread across both the lanes.The Razorback is another place these mobile chicanes choose to ruin for people on motorcycles. And this was the first time I wished the King was carrying louder pipes. Pulling the clutch in as you sneak up behind the pedalers, then unleashing Milwaukee thunder just as you draw level has never lost its amusement for me. As it was, I wafted past them, took a photo of the Razornback sign, wondered once again if maybe in the dim past gigantic feral boars had given the ridge its name, then descended into Picton.

Of course, this being bastard Australia, it is not possible for a man to have a shot of good whiskey from a bar on a bright and sunny morning. But I did stop to briefly snap the ancient (by Aussie standards) George V hotel and the conveniently-located tattoo parlour across the road. 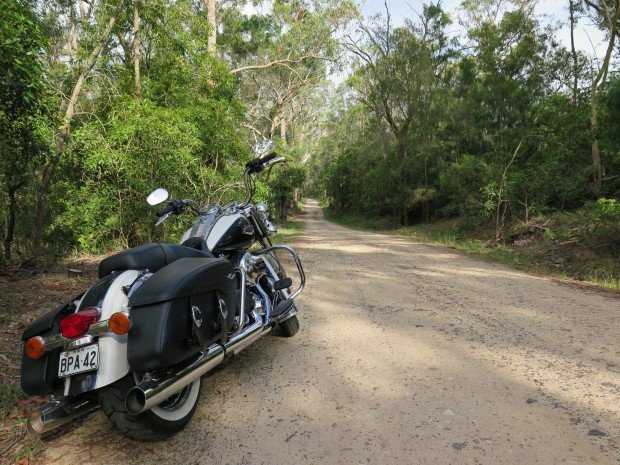 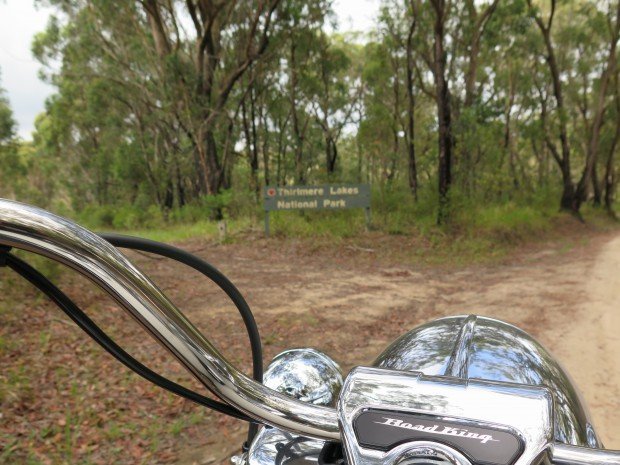 Focus on the bike name or the sign? Decisions, decisions… 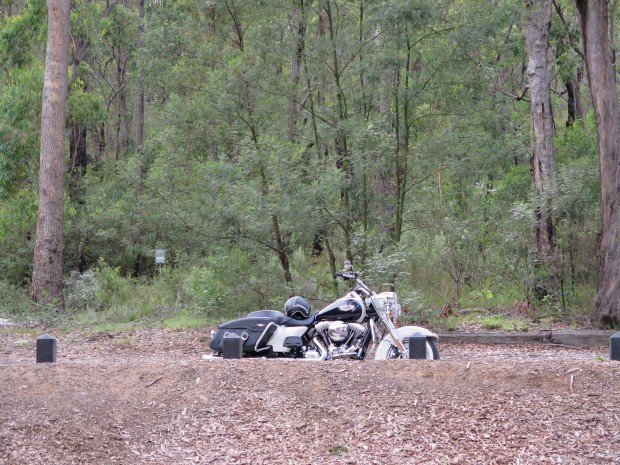 No, I didn’t ride it into a ditch. I parked it behind a berm and went to look for the lakes. I didn’t even notice the black post until now.

Then I arced under the railway tunnel and made for Thirlmere and Buxton.

Thirlmere is famous for two things. A train museum (but you will forgive me for not stopping to take any images of trains), and the World Heritage-listed Thirlmere Lakes, which you may be surprised to learn I had not ever seen.

I decided to rectify that, but paused briefly to have a coffee (in lieu of a nice single malt) in Thirlmere.

As I was draining my cup, a fat, slow-moving man with an ancient dog walked by.

“You should have a shotgun, chief,” he offered.

“I am a river to my people,” I shrugged, thinking that he was absolutely right. 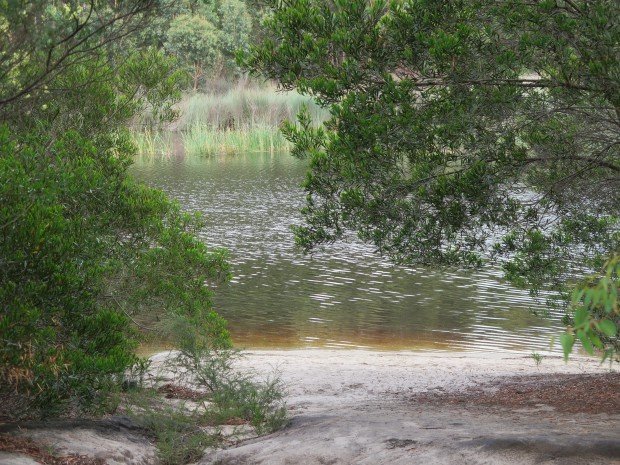 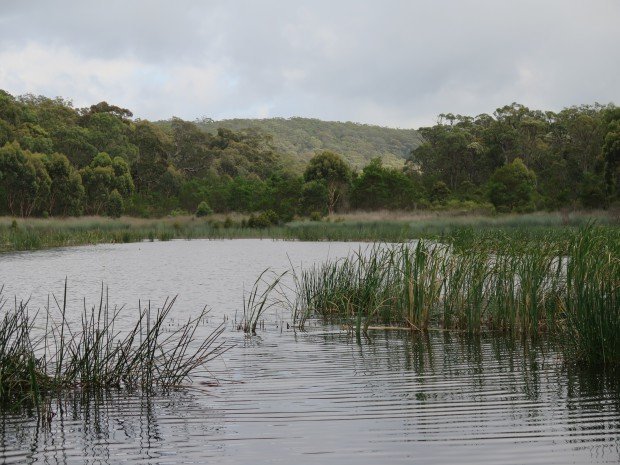 “I should have brought mine,” he said, looking up and down the deserted street like an old-time sheriff, then down at his old dog, who was pissing in what looked to be painful spasms on a nearby shrub.

I agreed with him. Perhaps he should have done. And perhaps one day, he will. And Thirlmere would be famous for something else.

I put on my helmet, bid him farewell, and headed for the lakes turn-off.

I turned right onto a well-groomed dirt track and the King and I trundled along for maybe two kilometres before anything remotely lake-like appeared.

I took some photos, in case people disbelieved my position on this and headed back to the main road and Buxton. 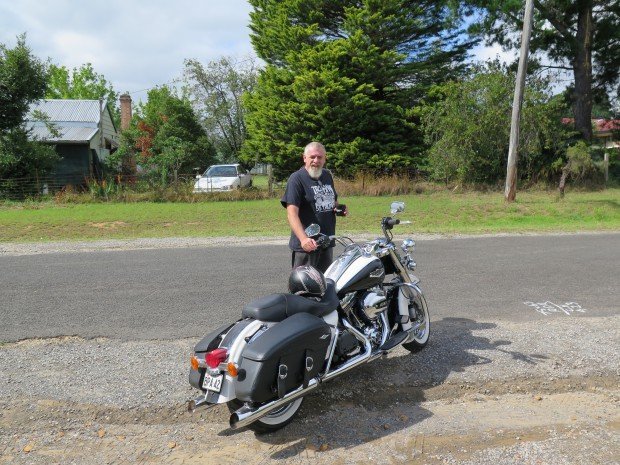 Peter has coffee with the King

Peter received me with coffee and lamentation. It seemed that the plethora of girls and something called a “Plymouth” (I have since established this is a car) were not going to materialise, and thus all we could really do today was measure me for a vest I wished him to make for me.

I was good with this.

I love visiting Peter and his workshop. Any time spent in the company of a master leather-craftsman, surrounded by the magnificent scent of leather is time well-spent on this earth. 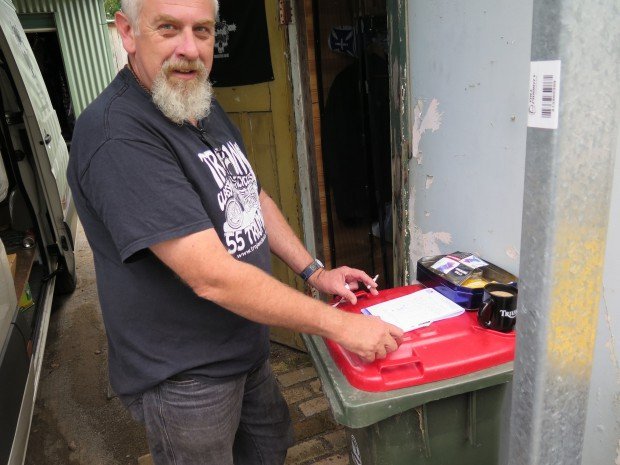 The Master makes notes of my man-like measurements upon his council-supplied all-weather workbench.

Then a girl showed up.

So Peter and I got the Diem and Carped it like motherfuckers.

In short order, he had a selection of tiny leather hot pants for her to put on, and I had wheeled the King into Peter’s driveway lest his neighbours be outraged by the girl posing beside it.

My efforts are as you can see. 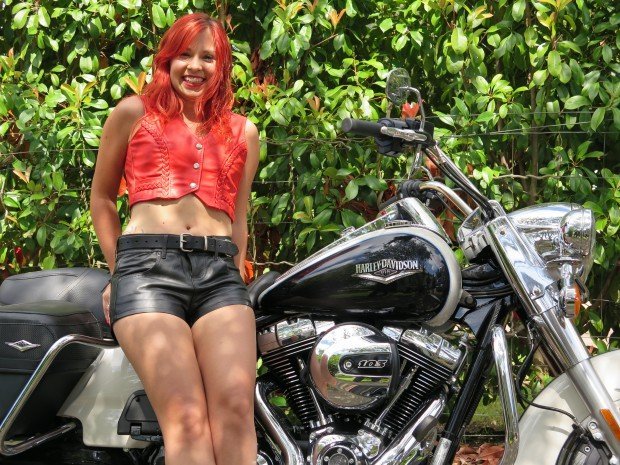 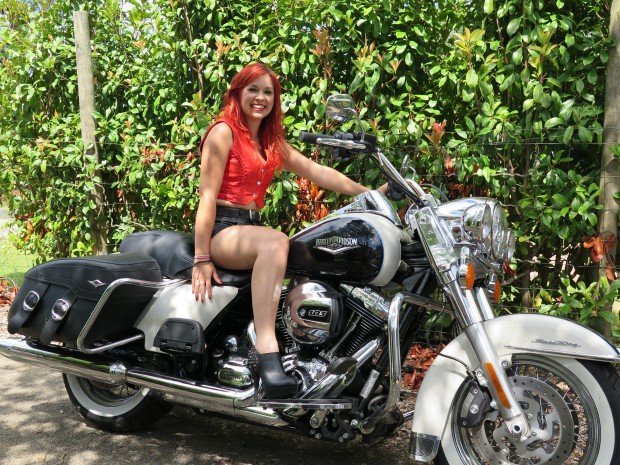 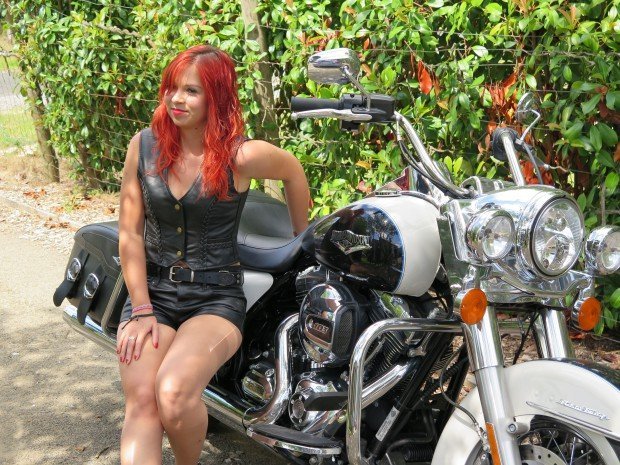 All parts of the King are comfortable to sit on. Even the rear footboards. 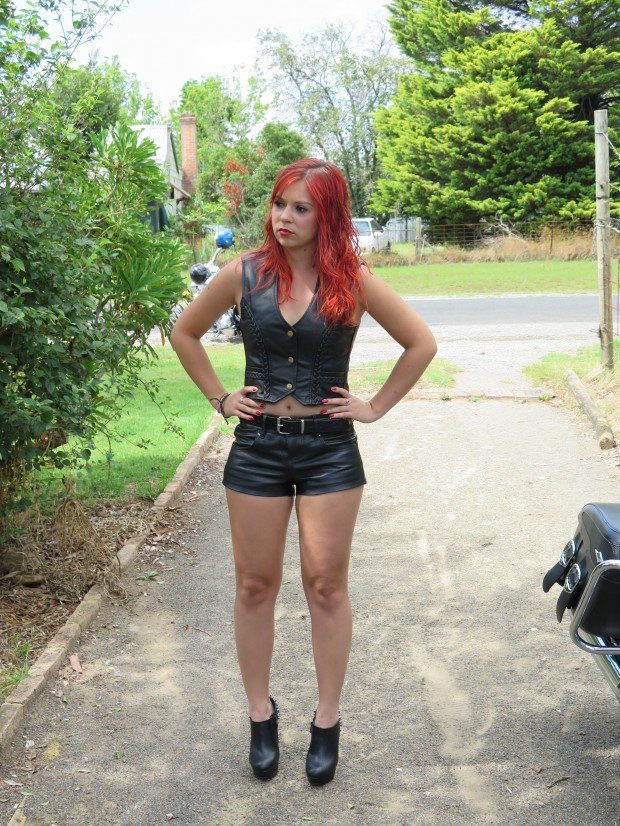 And girls are only happy when they are touching the King. Otherwise…not so much.

Measurements done, girl photographed, the King rubbed by young thighs, I bid Peter farewell and after rumbling around a few backroads through Douglas Park and Menangle, I found an old drinking hole I once used to visit that was happy to sell me whiskey now that Jesus was good with it.

The Oaks pub at Leppington, once a notorious biker hangout, is now known as Lockies and has been refurbished. There seems to be nicer furniture to break, and a big timber deck to throw up on, but the carpark is still roomy enough for short-circuit drag-racing and the odd rumble. 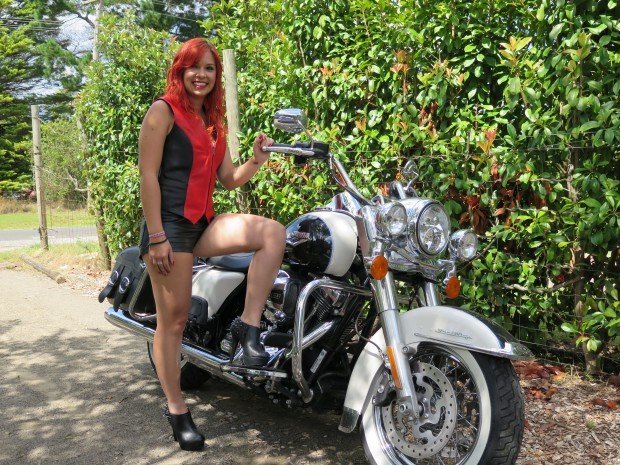 See? Once contact with the King is re-established, happiness returns.

The King purred like the big, happy gleaming bastard that he is all the way home after that delightful pause. He had re-affirmed his credentials as a superb touring motorcycle and chick-magnet that Saturday.