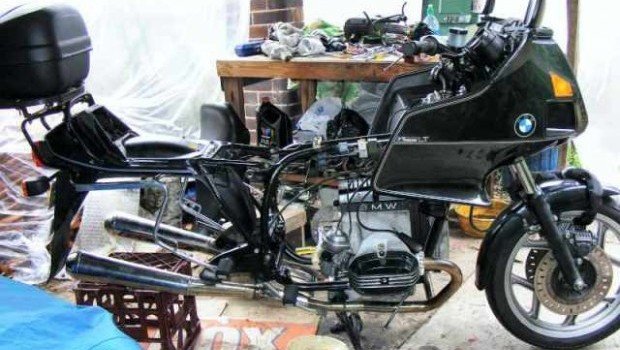 Saturday. I did an oil change. Went and bought some 20w50 Penzoil. Came home and dumped the old oil. Drained the oil cooler. Refilled the engine. Primed the oil cooler as per the manual. Then off for a ride. I went up through Bobbin Head and through to Mt Colah. Got petrol and was heading for the Old Pacific Highway. As I was changing up a gear my foot slipped from under the gear pedal. Never had this happen before! So try again and same thing. Foot slips out from under the shift pedal. I look down and my left boot is covered in fresh oil. I pull over and see oil dripping from the underneath of the left cylinder at the head gasket. OK, this is a BMW and they are tough. If I ride at a sedate pace I should get home.

I do. I think hard overnight. Maybe I had not torqued the head down correctly last weekend? Maybe I had missed one of the nuts?

I recheck the head bolts. All ok bar the top left one. It keeps winding out. Silly me! I should not have kept winding the nut up. I assumed it would get tight. It kept winding and pushing the stud out further. So much so, that I can’t get the rocker cover back on. The stud has stripped its thread in the engine casing. 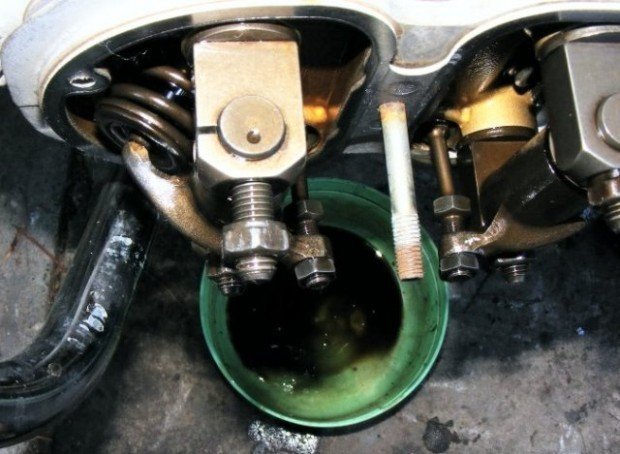 The stud is now interfering with the rocker over

Fixing this is way beyond me. I arrange for the bike to be fixed by a local BMW repairer. They find that someone has already put a helicoil into the offending stud hole, but it has not been done correctly. When I torqued the heads down I stripped the stud and helicoil out. I was shown the helicoil that came out and it had ripped a fair bit of casing thread out with it. It also damaged the thread on the stud. To try to repair this the bike shop fits a timesert thread. This does not take due to the stud hole now being bigger than it should be. When the cylinder is torqued down and the engine started up oil weeps out at the head gasket. They are not happy with this at all. The timesert cannot hold the stud tight enough. 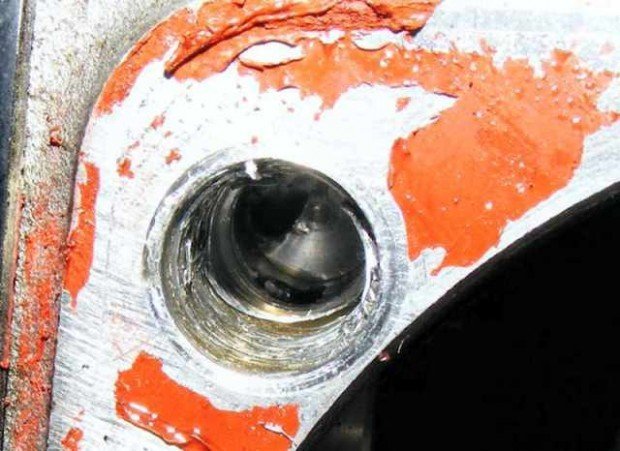 Disaster! The stud hole can not be welded up. Nor can a new hole drilled and tapped as there is an oil gallery right at the back of the hole. If this oil gallery is damaged there’s an even bigger disaster. So the crankcase can not be repaired.

The only other option is to buy a new old engine. They have an engine that I could buy. It turns out to be an 800cc one. I will keep my old engine. The cylinders and pistons are in great shape for the mileage in my current engine. The other thing they can do is swap the cylinders and engine electrics from my engine onto the other one, then fit the “new old” engine. The cost of this is going to take me well over my budget. I have to pay for our youngest daughter to go to Japan next year for a school trip. The mechanic asks me why I torqued the heads down. I tell him that the Haynes manual said to do this before you do the tappets. He suggests the only time that this needs to be done is after a head gasket has been fitted. I have learnt my lesson. At least I am not the one that stuffed up the stud hole in the first place.

I will do the engine swap. I can’t afford what they want to charge to do this. So now I have an R80 engine. Comparing the engine number against the data base at BM Bikes it looks like the engine came out of a R80RT from October 1982. The engine is black because it is coated in so much old oil. The right hand cylinder is leaking at 80% in a leak down test. The left hand exhaust nut thread on the cylinder is trashed. So my current barrels etc will be fitted to this “new old” engine. It does turn freely so at the end of the day all I need is the crankshaft and casing.

Sonny (BIKE ME! forum Rockster) helps me to collect the bike. We both drool over the low kilometre Japanese grey import BMWR100Rs’s they have. Both in very good nick. 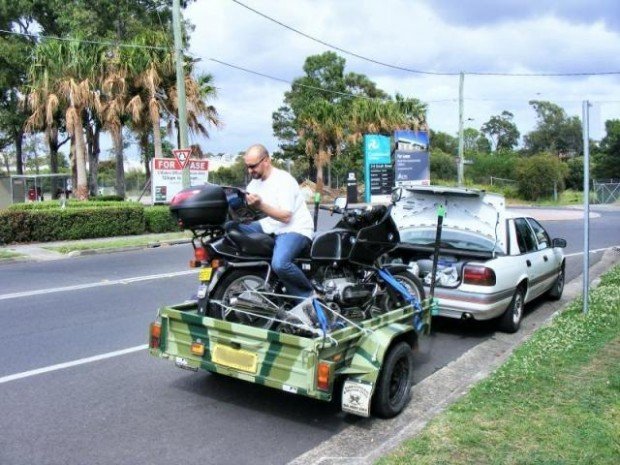 Sonny secures the LT to the War Trailer…

We take the bike back to Sonny’s place. He has a two car garage. I just have a carport – not the best place to do an engine swap with rain blowing in. His garage becomes BMW Central.

We attack the LT. Sonny’s sons help out too. Good on you chaps. Thank you for helping. First  the swing arm comes out. Then we take the gearbox out. We attack the engine electrics, and undo the engine bolts. We move engine back in the frame. We pivoted it so the front is pointing down and out to the left comes the engine. So simple! While this iss going on Sonny’s youngest son is degreasing the new old engine. 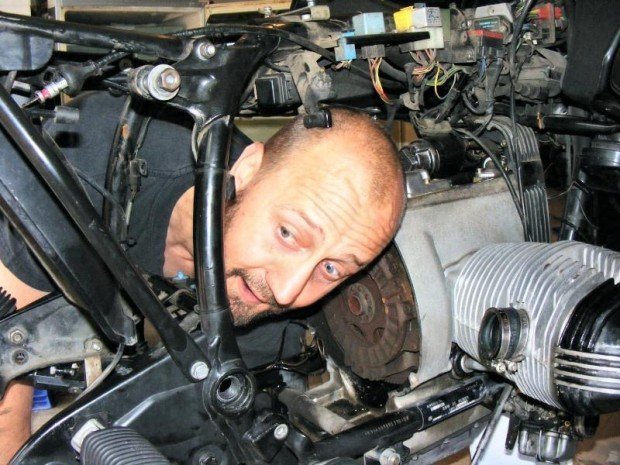 …and demonstrates measuring clutch plate thickness with his ear

Time for the swap. “Old new” engine in the frame. After a bit of fiddling with spacers and a  damaged engine mount face the engine bolts go in.

We have been doing so well… HAHAHAHAHAHA… That’s what we think. The “new old” engine has no clutch or flywheel fitted. I look at my clutch and the manual and see that some special tools are needed. And the timing marks on the flywheel scare me.

One of Sonny’s neighbours, Mick, has been over a few times to see how we are going. When he hears about the clutch brings his mate John over. John has worked for a BMW bike dealer in Sydney and knows a lot about BMWs. John is not a mechanic. He was spares guy but knows his stuff. He arrives and takes all our fear of stuffing up the clutch away. With his help we have the clutch out. He points out that the rear main seal in the “new old” engine is missing. John has saved us from a disaster just waiting to spring itself on us. He suggests that to get TDC right on the “new old” engine that when the con rod is all the way out on the crankshaft we are at TDC. So simple, but we didn’t even think of it.

We buy a new rear main seal. I think we can have this bike back on the road by the following weekend. Knowing me something will rear its ugly head and throw me into a wobbly again. We put the engine back together. Cylinders, pistons and heads have been swapped. The engine stud in the old new engine does not strip when I torque it up. Helps when you torque in small jumps. The engines runs sweetly. It is fantastic to hear it running again. Well it is until we engage the clutch. From the depths of the engine comes a horrible grinding sound, then the engine stops dead. WTF have we done? We get out the manual, and spend many hours discussing what we could have done wrong. 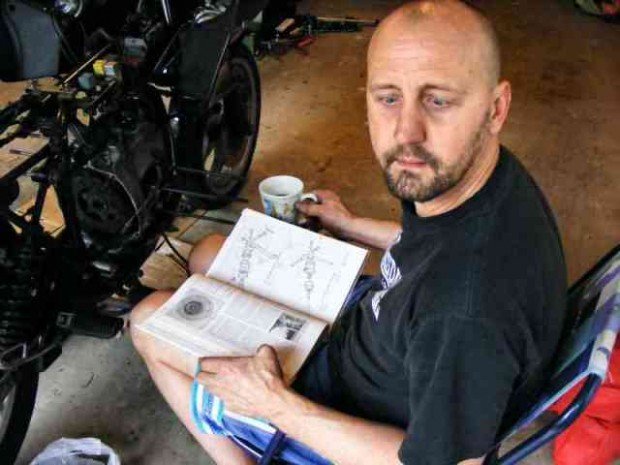 Out comes the gearbox again. I lose count how many times we do this. We see bright silver metal shavings. This is not good at all. We turn the engine over by hand every time. Still grinding. We think it might have been the clutch pressure plates not mounted correctly. No!

I get the bright idea of mounting the flywheel washer on the inside of the flywheel to move it away from the crankcase. This helps, the grinding is not as bad. Funny thing is the grinding only happens when the clutch is pulled in. I decide that we will put the whole bike back together and live with it.

After spending sometime getting the new drive shaft boot on, the bike is ready to ride home. We have found that the gasket on the sump has been breached. Oil is flowing out. Thankfully it is only about 2 kilometres to home. The trip home is not fun. The back end is sliding out on every corner. The engine sounds horrible. It runs as rough as guts and will not rev out. When I got off the bike oil has spewed from the back of the engine and been flung all over the rear wheel. No wonder the bike was such fun when cornering.

This grinding is just not right. I do some searching through the ADV Old Skool forums and find a photo that shows the flywheel guide ring fitted. Hang on, I have one of those in my old engine. I post to the BM Riders Club forum and the reply is, yep, that has to be fitted.

It’s a brass fitting with five holes that the flywheel bolts go through to the end of the crankshaft. It also fits into the rear main seal. As this was not fitted when I rode home, oil was being flung into the clutch housing and then onto the back wheel. 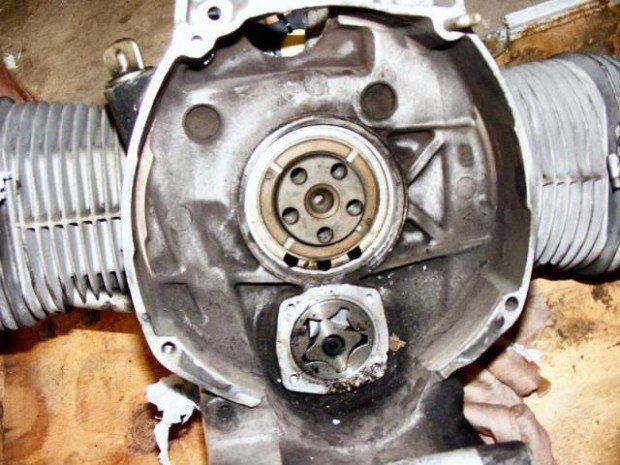 Again I have to strip the back end of the bike. This is getting boring. I take the gearbox out yet again. Sonny is off on a ride this day. Poor guy he needs it as I have been working him like a slave. So I go solo. 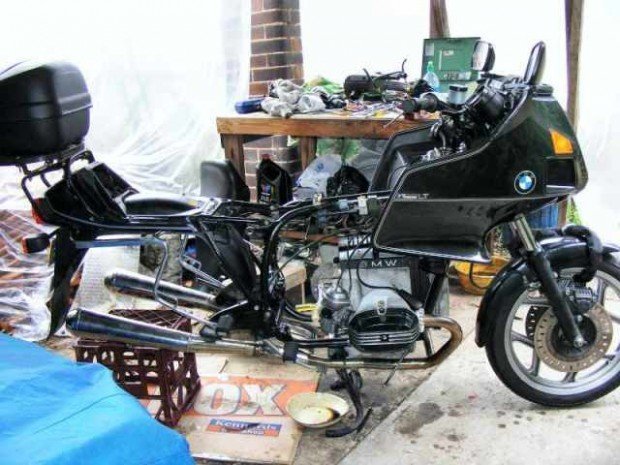 The moment of truth! I fire up the engine. What a lovely sound: the sound of no grinding. I pull the clutch in and no grinding – just that wonderful sound of a boxer firing away.

Sonny comes around and sets the swing arm for me. He has been a champ right through this whole rebuild. He is still on a high from his 600km ride.

I take the bike out for a short ride. Everything seems fine. I walk in the back door and my wife sees me grinning. “I take it this means the bike is running.” You bet it does.

There is some fine tuning as the engine beds in over the next few weeks. I perform three oil changes to flush the engine out. I strain the oil as it comes out of the engine: no nasty bits of metal. The carbs have need a bit of tweaking. Other than that it runs ok. Sounds a bit louder when warmed up, but all BMW airheads are loud when warm.

It’s because of you all that my BMW is back on the road, and I am very grateful to you all. 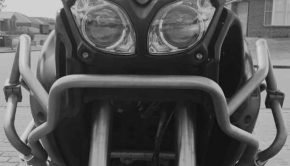