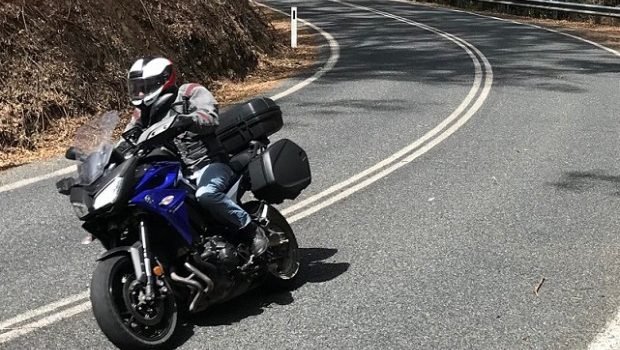 We did what’s becoming the usual on the Australian MotoGP weekend: headed in the opposite direction, rode winding roads, booked into a seaside hotel and watched the race on the big screen while drinking icy cold beer. There were a bunch of us who weren’t interested in VicPol’s mandatory stop and licence check for all bikes going onto the Holy Island, and we arranged to meet in Port Macquarie.

Boris and I got to Gloucester at about eleven on Friday and were joined by The False Boris a few kilometres later. We dealt with Thunderbolts Way in the customary manner, met Klink and Dino at Walcha, ate and drank like kings with Andy at the Walcha Motel, and rode the Oxley Highway to Gingers Creek the following morning. I parked my bike and put my helmet on the seat. A tiny silvereye fluttered down, perched on the visor and started picking the dead bugs off it. It made me hungry, so I went in to the café and ordered a plate of bacon and eggs.

Over the next couple of hours more people arrived, and we left a bit after ten to ride the tight fun bit of the Oxley between Gingers Creek and Wauchope.

The fast guys were soon out of my sight. I was running about fifth and thought I was going hard until a grizzled veteran on a Suzuki DL650 whom I remembered seeing at Gingers handed me my arse by passing me on the outside on a blind left hander at a convincing speed differential. Then I was running about sixth.

A couple of headlights appeared in my mirror as I saw flashing red and blue lights through the trees, so I put my hand up and slowed down. A few turns later we passed the source: some Rural Fire Service trucks parked while their crews fought a bushfire approaching the road, and a general duties police car.

We dodged burning twigs and leaves and ash for a few turns and resumed the pace. Cars coming the other way started flashing their headlights, and we slowed in time to pass the highway patrol car parked at the side of the road. Then Froggy, who’d been in the fast group, came past us on his Buell going the other way and gesturing, so we slowed again in time for the second highway patrol car.

We stopped at the Long Flat pub for a refreshing lager or two. Nineteen of the bikes parked outside the pub were our people. 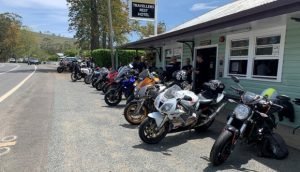 The highway patrol went past. Boris waved. “Love you!”, he shouted.

The authorities closed the Oxley that afternoon because of the fire. Some of the guys we knew had to turn back and take a four or five hour detour via Armidale and the Waterfall Way to get to Port.

We found a pub with Fox Sports on the screen that afternoon in Port Mac and drank beer while we watched qualifying until it was cancelled due to wind. Then we went to the Westport club on Sunday for a day of motorcycle grand prix racing. The air was smoky.

We watched the Moto3 race, and half way through Moto2, Cipher re-introduced me to a guy I’d last ridden with many decades ago. Cipher had apparently met him on some ride in the Snowy Mountains a few years ago, and had started to tell the story of my crash onto a train at Granville many decades ago, when Waddo had said “I know that guy.”

Waddo started telling horrific stories of our adventures. “I was sitting in the back of an HQ Holden with a dying woman on my lap while it was going sideways around corners in the middle of the night on the dirt road on the way to Myrtleford hospital, and Al was driving”, he told Cipher.

My memory wasn’t a hundred percent clear, but neither was his. I was in the car, but I was in the front passenger seat, and her son was driving. “I thought it was a dead woman”, I said.

“No”, said Waddo. “I had a pulse until just before the hospital.”

I went to the gents to get rid of some beer. When I came back he’d launched into another one. “We decided to take back roads back to Sydney because one of the bikes wasn’t registered. There were four of us but only three bikes. Al was carrying the bikeless guy, and we were on a dirt road somewhere south of Goulburn, and he was drifting the back out of corners. Then it started to rain, and he hit some clay, and Al lowsided and was sliding along the road with a T500 on his leg when he got passed by his passenger, who was sliding on his back holding his guitar up with both arms.”

There was a lot of smoke in the air when we left on Monday. Other bushfires had started in the preceding twenty four hours.

We turned inland at Taree. There was a lot of smoke in the air there too. We rode the Bucketts Way to Gloucester. It was still smoky.

We cut across to Singleton via Dungog. Singleton was smoky too. I left from Boris’s house and rode the Bylong Valley Way through the smoke. I turned off at Bylong and headed for Mudgee. The smoke cleared about ten kilometres out of Mudgee. I got to Ben’s place about forty minutes later.

We had a drink of Boris’s rakija. I told Ben about the weekend. He’d seen the race. “I so wanted Rossi to win”, he said. “He’s such a little rooster.”

We switched to Bushmills. I stayed the night. The next morning he said he’d changed bullets in his .22 magnum and it was a pain shooting it in, because after every shot he had to walk thirty metres, climb over a fence, walk twenty metres, check the target and then do the same in reverse. He asked me if I’d spot for him. I said sure.

He gave me a walkie-talkie. “Press here to talk”, he said.

“Does that mean I have to call you good buddy?” I asked.

I climbed over the fence and took up a position a few metres left of the target. We shot the rifle in.

We had a coffee. I packed the bike. I told him I had a couple of days off late the next month. “Okay if I come up then?” I asked.