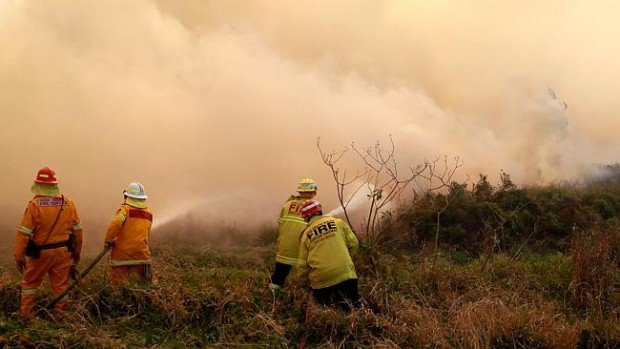 Yesterday’s bushfires appeared to have abated. My friend Ken, who lives in the mountains, had been evacuated, and then unevacuated. The Sydney Morning Herald web site said the Bells Line of Road was open. I decided I should ride to Lithgow and Visit the Sick.

I took the KLR650, because I was feeling perverse.

Everything looked normal on the M2 and M7. At Richmond, an RAAF C130 was lining up his approach to the military base low, with wheels and flaps akimbo.

The traffic was light.

I charged up Bellbird Hill at the appropriate velocity, backing off only for the speed camera at the top.

It was a long time since I had ridden the KLR on this road. It’s okay, in a kind of skinny and elemental and shaky way. I had a free run over Mount Tomah and Mount Bell and Mount Charles. There was smoke in the air. It’s pretty good from there on, and I maintained that appropriate velocity.

I backed right off coming into the 60km/h zone at Bell, and started going down gears when I noticed the six police cars blocking the road.

I coasted to a halt. The cop asked me where I was going. I said Lithgow. He said I wouldn’t be going via Chifley Road or the Darling Causeway, on account of the fires and the power lines down. I asked him to shorten it and tell me which way I COULD go. He made an arm gesture that indicated the Putty Road, the Golden Highway, the Bylong Valley Way and the Castlereagh Highway.

I started the bike, and U-turned. I was quietly pleased. There were six police cars on the Bells Line of Road, and I knew where they all were.

Some people will tell you that you can’t have fun on the Bells Line of Road on a KLR650. They are wrong. My dirt tyres are scuffed almost all the way to the edges.

I rode lonely dirt roads covered in loose stuff. The trees were black from recent hazard reduction backburns, but hadn’t exploded like eucalypts do in high intensity bushfires. I stood on the pegs and let the bike move around under me. I came to an intersection, and turned to what I thought was the south, hoping to come back to the Bells Line of Road.

There was a water crossing, which looked vaguely familiar. There were tight dirt hairpins.

Then there was better dirt. Then there was tar, and I found I was on the Comleroy Road, which climbs from the Colo River up the mountain to the Bells Line of Road.

I garaged the bike, and jacked it up and lubed its chain to wash off the dirt and moisten the O-rings, and went upstairs, smelling of WD-40 pour homme.

My daughter was watching a Japanese cartoon DVD.

“Danshi Koukousei no Nichijou”, she replied. “It’s hilarious. These guys are hanging out after school at one guy’s place, and his sister is out, so they stole her underwear and are trying it on. Is that what guys do?”

She is an only child, and goes to a girl’s school.

“No”, I replied. “We drifted apart. They all became highway patrol officers and Catholic priests.”

“You just made that up”, she said.