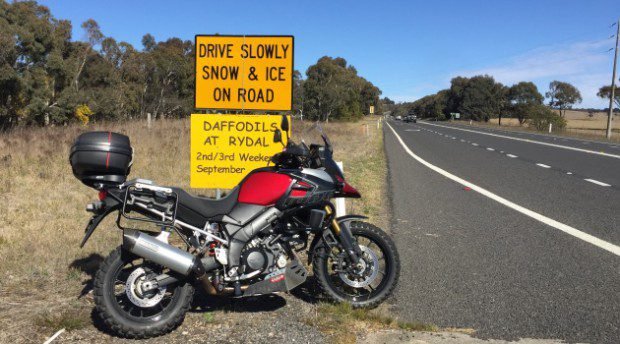 Ben said I should come up and show him my latest bike. He is a wealth of sound ideas. “We will have my thrice cooked chips for lunch”, he said. “And some other stuff.”

I left early. The snow and ice signs were out on the Bells Line of Road, the Chifley Road and the Great Western Highway. The knobbies on the ‘Strom smashed the ice and it didn’t feel too slippery. I was looking forward to hitting the dirt at Sallys Flat to see what the difference was between traction control settings TC1 and TC2.

I tolerate riding dirt, but I can’t say I like it.

I got to Ben’s. Dave from next door came over for lunch. Ben fired up the generator so the deep fryer would work.

Dave looked at my bike. We drank a beer and he talked about the MotoGP on television and how it was a shame Rossi was out, and how Dovizioso was doing pretty well on that other Ducati. He told us he used to be crew for some race bikes when he was a kid: a Manx Norton and an AJS 7R. Then the Yamahas came out and they were cheap and fast and two-stroke and it all changed. He reminisced for a while about the old names: Hindle, Toombs, Willing, Carruthers.

We went in for lunch. Ben brought me up to date on the district news. He said the reason the grass was so low was that he had let the guy across the road agist some sheep there. “He brought a hundred and forty over”, he said. “And a couple of weeks later he took a hundred and fifty eight back. How cute are newborn spring lambs?”

Dave said he bought a Suzuki Hustler for fifty bucks from a deceased estate a few weeks back. He said it had a disk brake and we argued about whether it was really a Hustler. We decided it was a GT250, probably around ’72, and that was close enough to a Hustler.

I told him I was probably going to take the Aarons Pass road back to the tar, because I had knobby tyres to wear out. Ben said it had just been graded but there was a lot of loose stuff on top. I said I had traction control, and Ben said that was all right then, and gave me another beer.

“Apart from that”, he said, “the only news is that the cops caught the blokes who were stealing bee hives around here.”

“Heh”, I said. “How did they do that? Did they get the bees to give them a buzz when they saw something suspicious?”

“They set up a sting operation.”