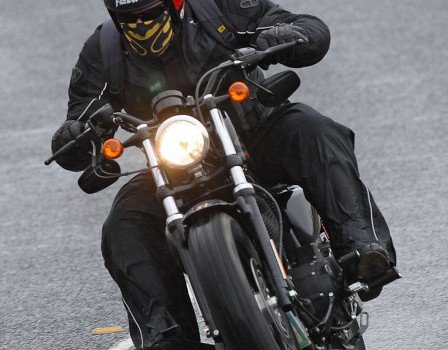 I recently posted a few lines on a popular Facebook page where apparent motorcyclists post things they deem interesting.

This is what I stated:

“Dear all you ‘OMFG it’s raining bitches’, get on your bike and get out there. How the fuck do you expect to become a better rider if all you do is shriek and hide whenever the weather or the road surface is not perfect? It’s rain. You won’t melt. Ride smoothly and you’ll be fine.”

Perfectly reasonable and delivered in a tone I felt was part high-handed disdain and part disbelief. And entirely appropriate given how affronted I was by this most unbecoming belly-aching.

The responses were fascinating. 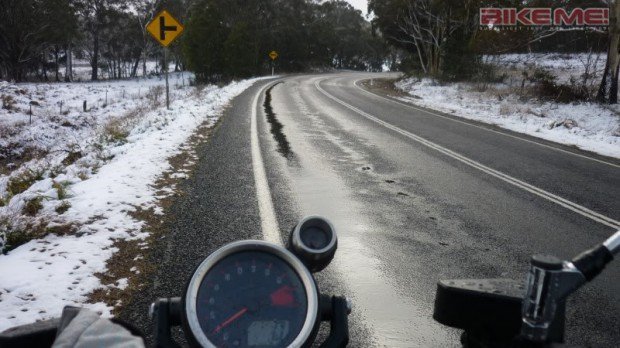 It’s only water. Even the white stuff. The problem is ice. The nasty part of water.

They provided an eye-opening insight into what kind of motorcyclists – and I use that term so loosely it could be a perfumed Moroccan whore – are seizing the handlebars in these exciting and modern times.

Please bear in mind that we live in an age where our motorcycling gear is quite amazing in its ability to keep us warm, dry and on our game.

We also live in a time when riders are forced to undergo compulsory training before they can get a licence or a permit.

And of course, we live in a period where the Internet not only provides a public platform for every germ with an uninformed opinion to yodel his imbecility from the safety of his keyboard, but also delivers all the information one could ever ask for.

Taking all of that into consideration, I therefore wonder how it is still possible, in this age of super-data, when the sum-total of human wisdom is at your fingertips, and you have been breast-fed your early riding skills, and motorcycling gear is so amazingly efficient, that there are still people like the following yellow curs purporting to be motorcyclists? 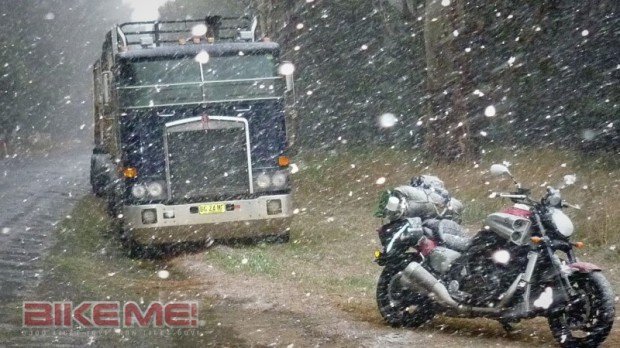 Snow trumps rain every time. So?

Check them out. Behold how they condemn themselves from their own keyboards. And bear in mind I am only cherry-picking from a wailing cascade of indignant angst. I have cleaned up the most egregious spellos and typos for clarity. And I have not named any of the posters in case their children, should they have the misfortune to reproduce, self-harm in shame.

“Um, can I suggest perhaps starting off in rain that isn’t this crazy and windy?”

“Cmon Boris there has to be a few exceptions here…”

“It’s not the rain that stops me riding in the rain sometimes, but the drivers who are distracted, frustrated with congestion and downright dangerous.”

“Considering I could see stuff-all driving in my car, and being surrounded by f-wits who can’t drive, can’t see potholes under all the overflowing water, etc, etc. I’m not in a huge hurry to jump on my bike.”

“I’m not against riding in rain, but if you can avoid it, I’d say do, it’s not safe driving, let alone riding at the moment!”

“This probably isn’t the best advice for newbies on small bikes. Crosswinds can and will blow you into other lanes. Better to start with a rainy day, or a windy day, not a windy-rainy day.”

“No thanks. I’ll leave the 2smoker inside with this weather and drive my can with a heater and radio, nice and dry thank you.”

“Well, enjoy the rain on your way home, mate. I’m in the car today with the tunes and heater on laughing while you ride in the drenching rain because you’re just that hard core.”

“What goose would ride a bike over a car in this shitty weather? Yeah getting caught in the rain on a Sunday ride can be fun. But saying sitting in traffic with it pissing down is fun and makes u a better rider is a joke.”

“Telling people to ‘harden up’ and go ride in shitty conditions is dumb advice.”

“Been riding for way to fookin long. Dont particularly want a 20 grand bike to repair cos of a dodgy driver or excessively slippery road. It’s a battlefield enough in the dry!! Rain sucks and makes for a shitty ride full stop. Unless you ride a fat ass tourer with a big fook off screen, heated grips and shitty looking wet weather apparel…nuff said.”

“Boris at 4 in the morning I’d rather grab my coffee and leave rather than fuck around for half an hour gearing up I don’t ride winter it’s too cold and summer is too hot but there are a couple of weeks a year that are perfect!”

“I just can’t be assed to waste money on wet weather gear. Rather a track day/tyres or anything else that comes to mind. Instead of looking like I should be hopping on a BMW TOURER.” 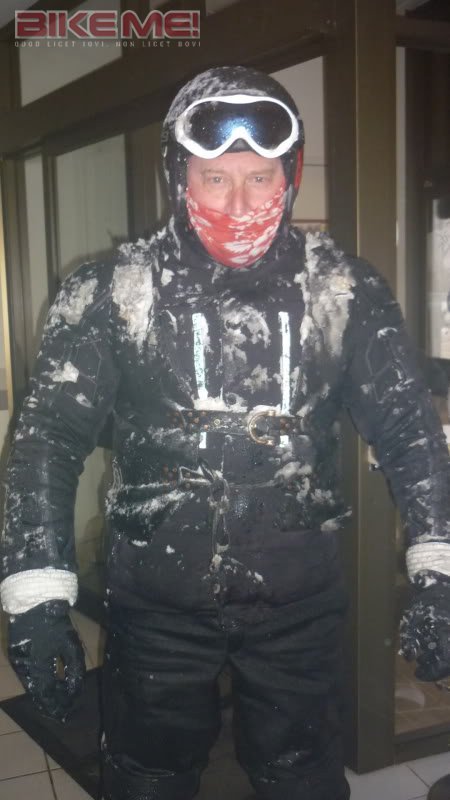 So, in summing that lot up, it would seem there is broad perception that:

In response to this disgraceful breast-beating, I offer the following:

1. Riding in the rain is not a declaration of toughness. It’s just riding in the rain on your motorcycle because you ride motorcycles and on that day, it just happens to be raining. Toughness is when you don’t shit your pants when a shotgun is pushed into your mouth.

2. I would rather ride in the rain than drive in the rain because of the inherent visibility issues and traffic snarls. Wet roads focus the mind wonderfully and you learn all sorts of interesting things about handling and traction.

3. Wet weather gear was a waste of money and a fashion crime in 1980. And for most of the Nineties. Not anymore.

4. You’re on a motorcycle. Traffic is what cars are. If you’re sitting in traffic, wet or dry, then you are an imbecile.

5. Beginners should ride in every condition and on every surface at every opportunity. It’s the only way they will stop being beginners and learn the skills that will ensure their long-term survival.

6. Car drivers are car drivers. Wet or dry. You are invisible on a bike. Wet or dry. The paradigm does not change because Jesus is crying. 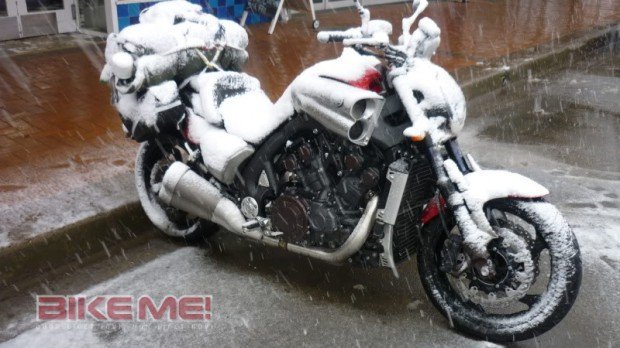 Reading between the lines of anguish the combination of rain and motorcycles seems to foster, what I’m seeing is fear.

And fear has no place on a motorcycle. Uncertainty, hesitation, and trepidation is what kills and maims motorcycle riders.

The acquisition of road-craft and skill is not something a rider acquires overnight or can learn from a book. It must be acquired by doing, and constantly practiced and honed if you plan on a long riding career. 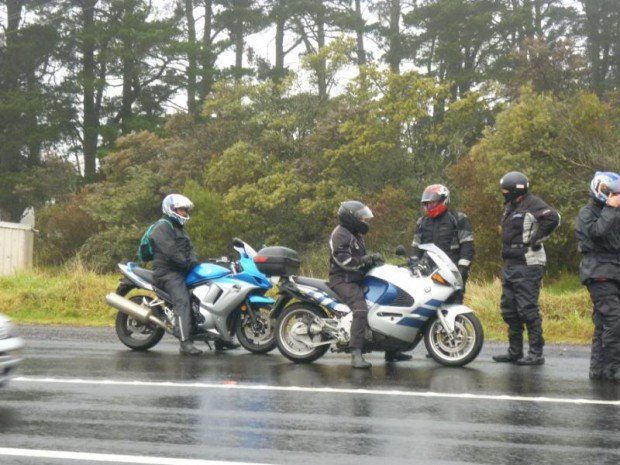 But how will you acquire it if you tremble and vacillate and choose the way of the cage instead of the way of the handlebars if the conditions aren’t spot-on?

And then you’ll die because you’re shit at riding motorcycles and you refuse to do anything about improving that shitness.

Guess what? You’re not doing it right – and the impossibly vast richness of riding bikes will forever remain closed to you. You’ll remain a clueless, unskilled mobile chicane – a hazard to yourself and to every other road-user.