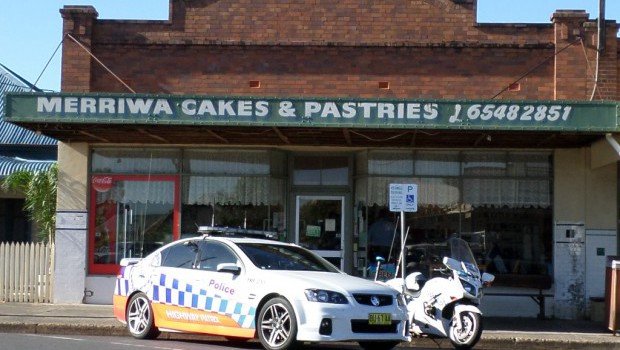 It was double demerits on the Australia Day long weekend, but Bly and I rode the Bylong Valley Way with insane yet immaculate precision, and lunched at the bistro at the Globe Hotel in Rylstone. I ate rare lamb chops and salad and drank James Squire Amber Ale, and Bly did whatever the hell he felt like doing, because that is how he rolls.

We got to Daz’s country estate mid afternoon, and spent a day and a half hunting pigs and ‘roos, and skeet shooting, and Texas Hold’em playing, and trail bike riding and wassailing and hooting and roaring.

It was good. I taught a kid to shoot skeet. How does that not warm a man?

We left Monday at 0700. There were a few ‘roos on the dirt road out to the highway, and a couple of dorper sheep broke and ran along the road in front of us. They made me laugh.

We stopped for gas in the town, and Bly filled up his fuel bladder, because he has an Italian motorcycle which drinks con brio, regardless, it appears, of whether it is ridden con brio or otherwise. In Italy there are many petrol stations, but less so in Australia, which kind of explains how I got to the Globe Hotel two days before without Bly, and turned around and rode back out of town to see where he had crashed, only to find him parked before a bridge over a scenic river before Rylstone squeezing the contents of what looked like a translucent bota into his tank.

Bly and I stopped outside the café, and made snide remarks about how if we did that there would be multiple fines for obstructing traffic and illegal parking and driving contrary to notice and such. We watched the Highway Patrol car perform an illegal U-turn over double white lines, and watched the Highway Patrol motorcycle join him outside the bakery.

Bly and I ordered bacon and coffee. We watched the cop get out of the car, and fail at trying to hitch his pants over his belly, and disappear inside the bakery. I took a photo of the vehicles outside the bakery.

We broke our fast. I kept the camera ready, but a car blocked our view when Officer Donut came out and squeezed into his car. Shame. I wanted to get a shot of that belly-hitching thing.

We saw the bike cop hiding in a farmhouse driveway a few klicks outside Merriwa with his Lidar gun. We went down the Bylong Valley Way and took the back way to Jerrys Plains, and saw Officer Donut hiding on Pagan Street at Jerrys Plains, trying to catch people accelerating too hard out of the final “S” and maybe doing 65 or 70 in a 60 zone. There would be good money in this – between $106 and $425 a pop.

There was another cop bike hiding in a driveway on the small length of the Putty Road that we traversed, and a red Highway Patrol car passed us heading south.

Such is the double demerit weekend. The police chase people at high speed and then tax them for travelling at a speed obviously slower than that of the cop. Sometimes, without the slightest trace of irony, they give a safety lecture about the dangers of speeding. Their Occupational Health and Safety people don’t seem concerned, for some reason. You won’t be allowed to drive a track day or a rally or a drag run without a crash helmet, but the NSW Police OH&S managers think it’s perfectly fine for them to hoon about the state’s highways at 200 km/h dressed in a leather cap and a gunbelt.

There were two more cops hiding on the F3.

But it’s not just speeding. They would have written tickets for other things too. For instance, parking inappropriately, like the cops in Merriwa did, or doing U-turns over double lines, like the cop in Merriwa did; so it was probably closer to $3 million.

On the minus side, it appears to have reduced daily road deaths by approximately zero.

On the plus side, it is what the cockneys call a nice little bunsen, and you have to salute a business model like that.

It is an important source of revenue, and it is well protected. For instance, if Bly or I tried to do the same thing, they would call it “Demanding Money with Menaces”, and put us in prison.