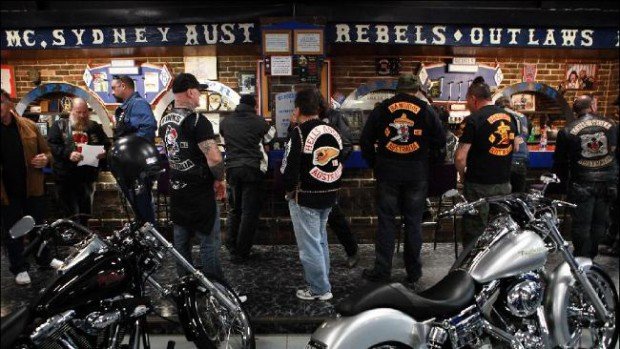 A mate of mine sent me this piece written by Peter C Proctor, Principal Solicitor at Proctor & Associates.

In 2012 the NSW State Government, in an effort to confront and control the behaviour of “outlaw bikie gangs”, amended the old consorting laws and brought in new legislation by way of the Crimes Amendment (Consorting and Organised Crime) Act 2012.

The provisions came into force on 9th April 2012. The Crimes Act was amended by the insertion of various Sections, one of which was s.93X which essentially states that if a person habitually consorts with 2 convicted offenders on two separate occasions and has been given an official warning in relation to each of those convicted offenders, then such person is guilty of an offence and liable to a maximum of 3 years imprisonment or a fine of 150 penalty units ($16,500) or both.

There is a statutory defence to such a charge if the convicted offender is a family member, in the course of lawful employment or business, education or training, the provision of health or legal services, in custody or compliance with a court order.

It must be remembered that the offence is not complete until a warning has to be given in respect of two convicted offenders. How would the accused know that the person he is consorting with is a “convicted offender” but for a warning?

It would seem on a reading of the legislation, that if A was “consorting” with B and C and both B and C were convicted offenders and A was given the statutory warning by police, then that single warning would be sufficient for police to arrest A on the next occasion he is seen with B and C.

If on the second occasion, A is with B and D, then he would have to be given a further warning in relation to D (assuming D is a convicted offender).

The “intell” accumulated by police, will require an honest keeping of records as this sort of legislation could very easily be abused, particularly if there is a dispute as to mistaken identity or a dispute as whether a person is a convicted offender.

What is a convicted offender?

The definition to “consort” under s.93W means – “consort in person or by any other means, including by electronic or other form of communication.”

It doesn’t take much for the imagination to know that this includes telephoning, messaging, tweeting, Facebook, and any other forms of communication.

The simplest dictionary meaning of “consort” is to “associate or keep company with”.

The aim of the legislation, according to the Attorney General, is to break criminal ties and milieu.

Is it possible to defend such allegations?

If a person is given the requisite warning(s) and is found to be consorting on a second occasion, then it would seem on a reading of the legislation, that the offence is complete.

However, not all communications between persons should be simplistically referred to as “consorting”. It may be of assistance to note comments made by the then Attorney General when the legislation was introduced to the Parliament, as follows –

“It is important to note that the mere fact that the person has met a convicted offender the requisite minimum number of times is not in itself enough to establish the offence. There may be a case where a person coincidentally meets convicted persons regularly, at a bus stop, at the corner shop or while buying coffee. Coincidence is not consorting. The High Court has found that consorting need not have a particular purpose but denotes some seeking or acceptance of the association on the part of the defendant (Johanson v Dixon(1979) 143 CLR 376 per Mason J citing Brown v Bryan[1963] Tas SR 1). It does not extend to chance or accidental meetings, and it is not the intention of the section to criminalise meetings where the defendant is not mixing in a criminal milieu or establishing, using or building up criminal networks.

This bill puts police in a position to do what they do best every day and make a judgement about whether observed behaviour reaches the level sought to be addressed by the bill, that is, behaviour which forms or reinforces criminal ties. There will, therefore, be prosecutions which involve more meetings or more people than the minimum, as police will be dealing with a wide range of circumstances.”

These comments could well be relied upon to defend charges – chance meeting – accidental meeting – no intent to mix with criminal milieu.

As stated above, there is a defence under s.93Y which states:

“The following forms of consorting are to be disregarded for the purposes of section 93X if the defendant satisfies the court that the consorting was reasonable in the circumstances:

(a) consorting with family members,

(b) consorting that occurs in the course of lawful employment or the lawful operation of a business,

(c) consorting that occurs in the course of training or education,

(d) consorting that occurs in the course of the provision of a health service,

(e) consorting that occurs in the course of the provision of legal advice,

(f) consorting that occurs in lawful custody or in the course of complying with a court order.”

It would be interesting to see what view the courts would take, if a group of people actually incorporated, and each member became a shareholder/director of the Company. Their various meetings would have to be in compliance with the Corporations legislation, which is Commonwealth law and overrides State law to the extent that it may be inconsistent (s.109 Cth. Constitution Act). The Company would have freedom to carry on interstate trade and commerce (s.92), in relation to its lawful activities under the protection of the Commonwealth Constitution.

This is just one example of how the statutory defence s.93Y(c) might be able to be used.

Consorting legislation is wrong in principle. It has the effect of demonising people and creating a sub-class of “convicted offenders” and ostracising them. There is no ‘time limitation’ applicable as to when the person may have been convicted of the indictable offence. It could be years ago. Further, whether or not a person is charged is purely a “discretionary” matter for the police or should I say “discriminatory”.

Perhaps you have been convicted of common assault or maybe a drug supply offence – years ago. Under this law, no-one can have anything to do with you socially if police take a dislike to you. You should be ostracised and live as a hermit, and your only contacts be family, employment associates or the like. You are a “convicted offender”.

Take Allan as an example who was reported on in the Daily Telegraph on 23 October, 2014.

Good on Alan. Very commendable. A success story. But if you are his mate and in his company you risk going to gaol for consorting. I think the consorting law means that the safest way for people to deal with a rehabilitated person like Alan is to treat him like a pariah. Now that will help him.

The new consorting laws, although a revision of an old law, are somewhat outdated. In the 21st century there are probably far better ways of policing criminal associates rather than pushing them underground. Policing methods have worked quite well in the past without the need for this revised law.

Peter Proctor LL.B. is the Principal Solicitor of his law firm, Proctor & Associates at Parramatta, and has a wealth of experience in Criminal and Traffic Law. Having been initially a member of the NSW Police Force, most of that service was as a Prosecutor (don’t hold that against him), and, in 1991, was admitted to the Bar and left the Police Force to become a Barrister. He practised as a barrister for 8 years, principally in criminal and traffic law. In 1998 Peter changed rolls and became a Solicitor, followed in 2001 by setting up his own law firm at Parramatta which has grown into a very busy practice with an enthusiastic staff and experienced staff, including other Solicitors.