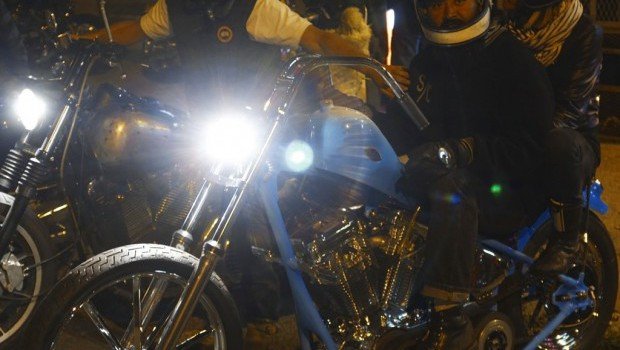 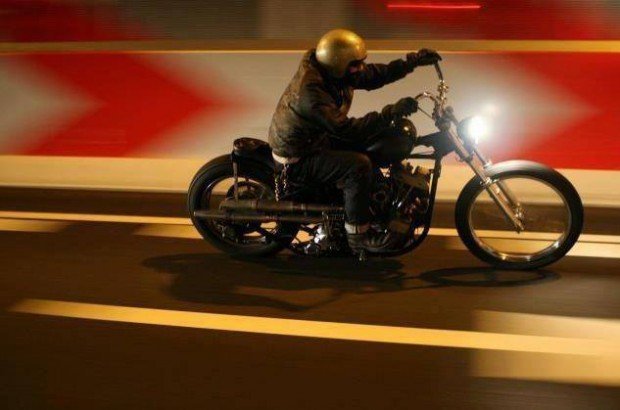 I think I may be turning into a vampire. From what I can tell, this is not at all that bad a thing. I have yet to open the juicy neck veins of some swooning whore with my fangs, but one can never tell what the future holds.

For the present, I have become newly enamoured of riding around my beaut city at night, and yawning my way through the day.

Of course, banging around at night on stupid, loud motorcycles was something my feckless youth was filled with. As everyone’s youth should be. I have long held the view that the correct time to buy a Harley-Davidson and fit it with doom-thunder exhausts is when you’re 25 and your girlfriend is a blisteringly sexy 22. Middle-aged women are unlikely to feel the same way about drinking cheap vodka, drag-racing, and gropey car-park sex as they did when they were in their twenties. One of life’s great comic tragedies is that middle-aged men still do.

So how riding Harleys has become a cruisery retirement option for tutt-tutting greybeards remains a mystery to me – and a topic for another time.

Hammering through deserted urban streets on warm summer evenings, on a bike so anti-socially loud it startles children from their sleep and causes defect notices to swirl like confetti in your wake, is eminently righteous.

Save your petty well-behaved judgements for those who care.

The thug life chose me long ago and I went willingly.

And when you’re young, dumb and full of grinning evil, it is one of life’s singular pleasures.

I am no longer young, but dumbness attends me like a shadow, and the evil has never ceased to grin.

So I have taken to roaming the streets of Sydney most evenings. Alone and unloved by most of the citizenry and all of the cops, but buoyed by glorious thunder.

My compatriots in this have been two rather wonderful new motorcycles. Specifically Harley’s wicked matte-black Road Glide and Victory’s pimp-cherry-red Magnum.

And while there is much to be said about yowling under sodium streetlights on a Jap superbike with a racing exhaust, there is an irreplaceable and ominous grandeur in the sound of a big twin.

But thunder is always thunder, and when you twist a fistful of it up and let it boom out into the night, it’s just magic. There’s no other word for it.

Deserted country roads have their place and I’ve ridden enough of them to know that doing them at night is wonderful, but fraught with the peril of the hopping shit-rat, and the waddling shit-rock. Wombats and roos are not our friends, and they lend a peril to night-riding in the bush I’m not always keen on confronting. The only thing you need to worry about in the city are the cops and the odd psycho-wog WRX.

But crazed dagos are my kindred spirits, and the Highway Patrol tend to hunt where the hunting’s best, and that isn’t in those deserted swathes of industrial wasteland that fringe all of our cities. It’s obvious these places have been acoustically designed to enhance your aural pleasure, so it’s only right to redline it in third and fourth and crash those sonic waves hard into the factory walls.

The two bikes I mentioned bring an extra to the table that was simply not available in my youth, when all I wanted to hear was my pipes and what colour panties my date was wearing on our way to all kinds of sleazy outdoor sex in some park.

Both the Victory and the Harley come with top-end sound-systems, and with my hand on my heart, I can tell you that there are certain songs by the Stones, Seger, and Springsteen that add a wondrous new paradigm to my Night Shifts. Sure, I kinda can’t hear much of their stuff over 140, but at less anti-Christian velocities, Jumping Jack Flash, Night Moves and Born To Run are immensely appropriate soundtracks.

And then there’s the whiskey. Our laws permit one every hour when riding, and one would have to be foolish not to have a bracing dram against the rigours of the night.

And lastly, there are your fellow night-creatures to enhance and enlighten your evenings. People are different at night. The darkness hides a lot of sins and makes a lot of promises.

A full moon, a warm breeze and the attraction of thundering hell-beast that smells of petrol, whiskey and nasty, is a lethally sexy combination. Girls might wanna dance with Justin Beiber, but they wanna go home with the Toecutter.

The night is also about choices.

You may choose to spend your evenings staring at horrible people making terrible food or crying about stupid renovations on your flat-screen. Or sleeping; as if there won’t be time enough for that when you’re dead.

Or you may choose to give yourself over to the night in a wash of wind and thunder.

Not much of a choice really.