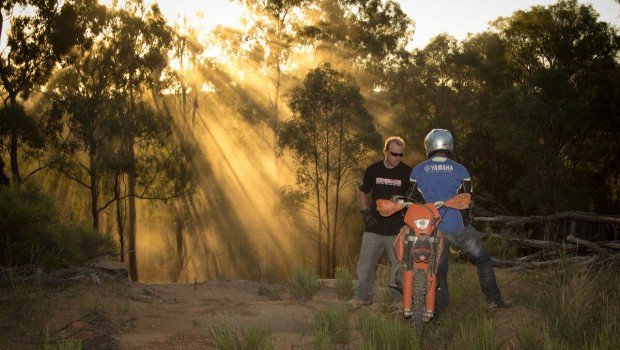 I spent a recent Australia Day weekend on a mate’s property, engaging with dirt bikes, high-powered rifles and whiskey-based water-drinks. On the second afternoon, one of the kids face-planted off his Honda 230 and was inside the house being ice-packed and nurtured by his mum, so our attention turned to the damaged dirt-bike.

It was nothing major. Forks were a bit twisted, and certainly nothing that several grown, mighty and vastly experienced men could not deal with.

Naturally, any kind of mechanical sorcery is always accompanied by a mystical and coded language of assumption, expectation and advice. And swearing. Motorcycle repairs cannot be conducted without swearing. It’s in the rules. Without swearing, nothing substantial can be achieved. So I have included it as it was uttered, so that you may bathe in the authenticity of the experience. If swearing offends you, go look at pictures of cats.

Anyway, here is the three-way conversation that accompanied the fork straightening…

“Has he bent the fucken forks?”
“Nah, I reckon they’re just twisted. Hold onto that cunt for a bit.”

“Hang on a sec, we need to loosen this cunt first.”

“Just undo that first, not the bottom triple.”
“I need a twelve.”
“Here’s a shifter. Look, fuck me, just fucken undo it up there. Just loosen it.”

“Which way are you fucken turning it?”
“The way it needs to be turned.”
“Fuck. Turn it the other way.”
“Undo the other three nuts…not those ones, these ones.”

“I’ve fucken undone them.”
“Hold it there. Hold it straight.”
“It’s not fucken straight.”
“Yeah, I’m trying to straighten it.”

“So fucken straighten it. No, the other way.”
“Hang on, I haven’t undone the top triple.”
“You don’t need to undo the fucken top triple, just the bottom one.”
“Push the bars…no, the other way. Stop! Fuck!”
“What?”
“Is that straight?”
“No, it’s still skewiff.”

“Do up the top triple.”
“Where’s the fucken spanner? I can’t do it up with my fingers.”

“I left it there…no, under the crate. Near that thing.”

“Pulling this. Here, fucken hold that.”
“Wait a sec… this fucken thing’s in the way.”

“What fucking thing?”
“That thing that goes fucken there, near that.”

“It was there a minute ago. There it is. Under that.”

“See? Look at that. Can you see that? Why is it doing that?”
“It’s straight. It looks straight.”