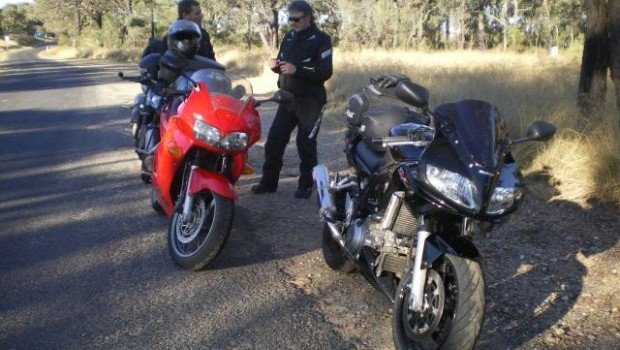 I shared Bly’s return to the road after his six month licence suspension. Because that’s what I do. Share.

We didn’t leave North Sydney until 1100, but we rode through Wollombi and Broke to Denman and lunched in grand style at the Royal Hotel, quaffing James Squire Golden Ale like it was beer or something. My “we” I mean Bly, Biffa and myself.

It was too late to do the Bylong Valley Way, so we smoked the Golden Highway to Coolah.

At 1645, the butcher was still open, so we purchased bacon and eggs and steaks and sausages, and put them in my top-box, and repaired to the nearby country estate of one Sydney entrepreneur.

Islamick and SVPete were there, so it was a quiet evening. Fortunately, Biffa had brought a deck of cards, so we drank some more beer and started a killer game of Texas Holdem and drank some whiskey and then some more whiskey, stopping only to go out and do something to the fire involving petrol and a Midori bottle and get more whiskey.

This morning I woke up with no money. Also, all of the whiskey bottles were empty. Go figure. Biffa had to leave early, so I went home with him via Mudgee and Lithgow and the Bells Line of Road directly after breakfast, which was high in protein and low in non-protein.

Bly was going to continue on to JAF’s place with the others. He seemed to be enjoying himself. It’s hard to tell. Things were a little blurry until about 1400.

We sped egregiously, and weren’t arrested. I hope Bly doesn’t get arrested. He is one shitty unit when his licence is confiscated by the Organs of the State. On the plus side, he will be riding with Daz, so he will probably be considered by the Highway Patrol to be a low value target, hoonwise.