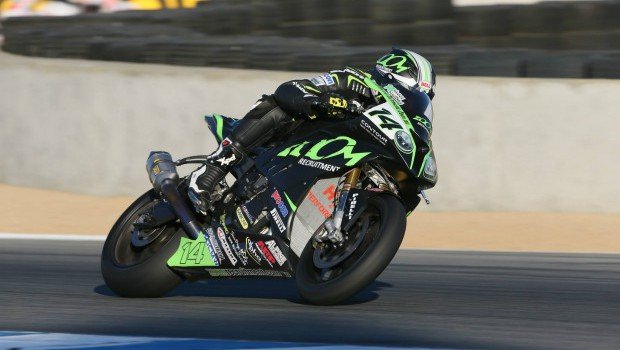 This Internet never fails to amaze me.

I had not long posted up on my Facebook page an image of a BMW S1000R I had been screaming around on, and wrote how I felt that bike development had reached an apex within this Bavarian manifestation.

I got a heap of replies to my post.

One of them came from Shane Kinderis and it read:

“Welcome to the BMW club, Boris. Now come ride one of our Superbikes.”

Shane, I felt, was taking the piss. Or Shane had gone mad. Sane people do not offer fat, tattooed bastards rides on Superbikes.

I checked who Shane was. 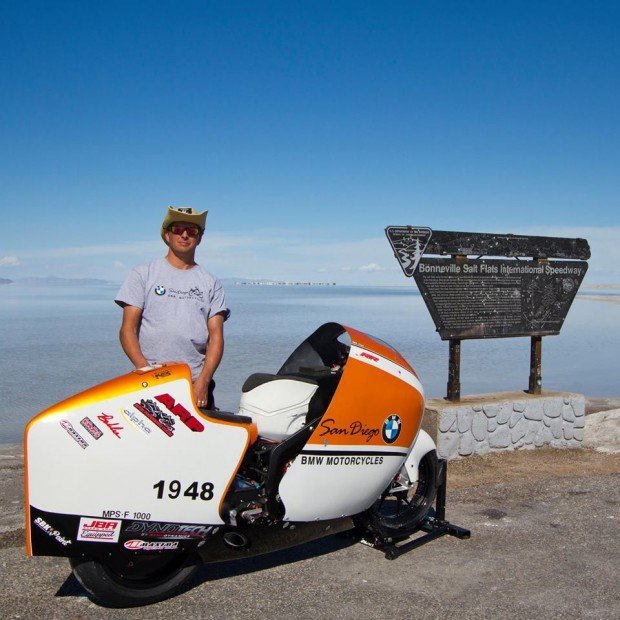 This is Shane at the Bonneville Salt Flats and the record-setting BMW.

While I was checking, a personal message appeared. It was Shane.

“How’s Tomorrow at the Creek sound? Just on the quiet, we are here testing at a ride day. You get a spot with the ride day you can have a ride.”

He manages the ASBK Pirelli Dynotech BMW team Glenn Allerton and Ben Nicolson race for. He also does a bit of World Land Speed Record stuff. At Bonneville, no less.

I blinked at Shane’s message again, then sent one back.

I’ll need more notice than that, just to organise a snapper.

“It’s the bike Glenn did 313km/h at PI last week. Ben’s spare bike lol. Although Ben is riding it tomorrow. It’s only 207 rwhp. 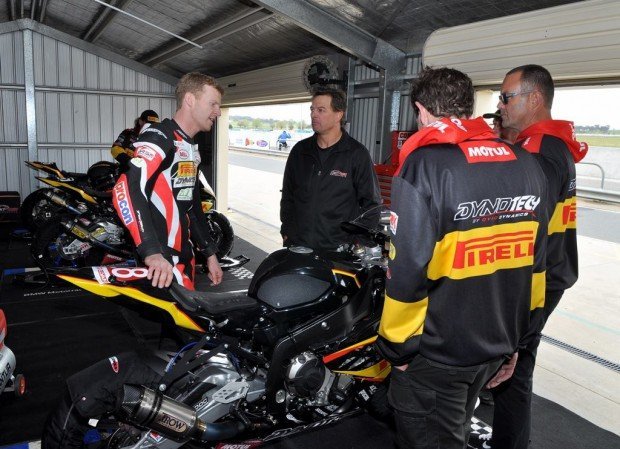 “Yeah, get that fat, tattooed prick in here. We need a laugh.”

More blinking from me. No giggling but. Maybe a little shitting. 313km/h? 207rear-wheel horses?

I messaged him back.

Mate, I’d love to do this, but I do need more than a few hours notice to set it up.”

After all, if I was going to crash and burn astride a BMW Superbike, it had better be recorded on some form of pixel-capturing device.

“Yeah, sorry on the notice thing but you did only just post the BMW thing.

No biggie. If you’re bored come out for a look.

And if you’re inclined bring your helmet.

Would be honoured to have you turn a few laps, and a little bit of press won’t hurt. Indulging in the drinking of the beer now. Call me in the morning all we need to do is probably give the ride day a plug and they should let you in, won’t be a problem for us time-wise.”

The next afternoon I was at Sydney Motorsport Park. I found Shane, Ben, and his dad, Alan, in Pit Garage 13. Were it not for the insanely growling Bimmer with sponsorship stickers all over it – the same one Glenn Allerton raced in WSBK at Laguna Seca recently, but now sporting the ASBK donk from last year (stock bottom-end but with WSBK head, cams, etc. and about five horsies down from the WSBK engine) – and the logo-bedecked leathers Ben was wearing, one could be mistaken for thinking this was just another punter out for a fang on a trackday. But like any trackday, if you know what to look for, you’ll find some interesting monsters in the Red (fast) Group. Phil Lovett was there, as was Supersport rider Jordan Carlsson. Glenn Allerton was also wandering around.

“The punters get out of the way for you?” I asked Ben, a softly spoken country bloke, who, according to Shane needs to be half-a-second faster before legend status is conferred upon him. 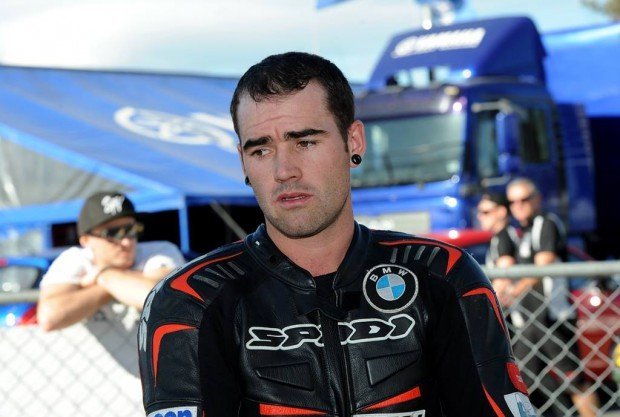 Ben was Sad Ben when I said I wouldn’t take his Superbike for a ride that day. 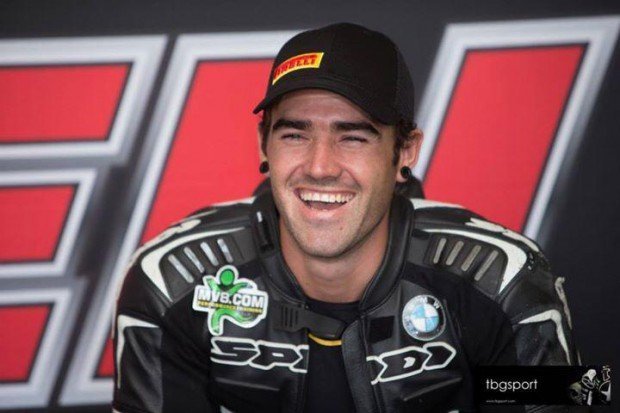 Then he became Happy Ben when I promised I would do it on another day.

Having never ridden in the Red Group myself, I hold this truth to be self-evident.

“So you wanna go out?” Shane asked.

I liked Shane the minute I met him. An always smiling, super-energetic bloke, he runs NextGen Motorsports, along with Wayne Hepburn and Nathan Webb. They’ve been at this for four yeas and are, as Shane puts it: “Basically three guys with a mad passion for racing”.

Shane is clearly a true believer when it comes to going fast on motorcycles in a competitive manner. He lives and breathes this bike-racing thing, and is typical of the men who drive the racing circus – zealots one and all. Sadly, the circus (or more accurately clown car) that is Australian Motorcycle Road Racing is widely viewed as having been pretty shit, and doesn’t look like getting any better any time soon. The two competing race series paradigm does not work. It will never work. Everyone knows that. But racers wanna race. They put up with having to do so on shit tracks, for rubbish prize-money, and promotion that looked at in a kind light is amateurish and in a harsh light is simply unforgivable. 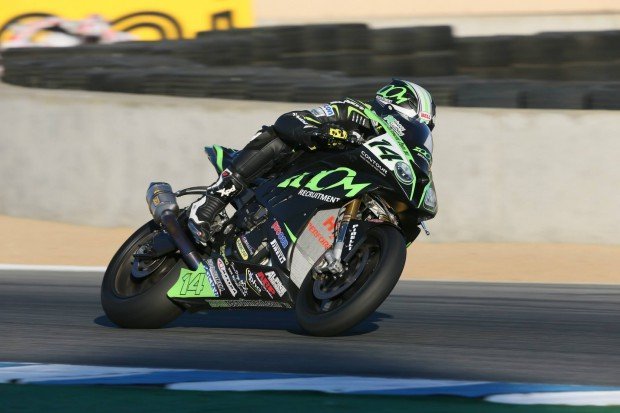 Glenn at Laguna Seca. I will not be riding it this fast. Promise.

But that is the state of play in motorcycle road-racing. Like I said, everyone knows this, but very few players want to make public statements.

If this state of affairs existed anywhere else, like in America for example, where it did for a while until the AMA came to its senses and amalgamated with its competitor, there would be team managers screaming from the rooftops.

Not so here. Australians don’t tend to scream about stuff much. Even stuff they feel very strongly about. And I can assure you that a lot of racers and teams feel very strongly about the status quo. But they continue to play and they continue to keep their mouths shut for fear of getting either of the two promoters offside. Such is the amateurism that any criticism is taken personally and paid back in kind. Ask around. 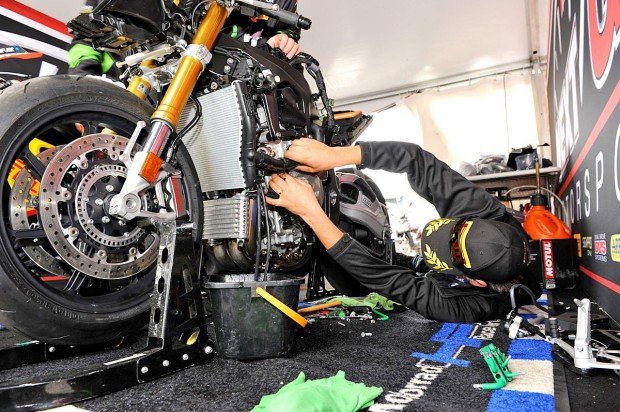 Shane is a one-man pit-garage.

Anyway, that aside, it costs lots of money to race at the top level. According to Shane, it takes about $150K per season to field two bikes and two top-end riders. Maybe $10K a race. In the last four years, Ben’s father has spent more than $400K on Ben’s career.

What have they got to show for it?

“A couple of trophies and a shitload of high-end BMW parts,” Shane tells me.

There is an awkward silence after that revelation.

“So what happens next year?” I asked.

“I don’t know,” Shane shrugs, his frustration evident. “I’m considering our options. There just isn’t the money to field two riders next year in two series’. I might scale it back to one rider. I just don’t know yet.”

“Australia is a big country. The cost of competing in Perth and Darwin and Adelaide and the eastern states is simply overwhelming.”

And this is from a team that has major sponsorship. BMW, Pirelli, Dynotech and NextGen.

The problem is insoluble for either of us at this stage.

“Of course I want to do a few laps,” I grin back as my bowels spasm a little bit. “But like I said, unless I can organise a snapper to bear witness to how shit I am on your stupid motorcycle, there’s not much point. And I didn’t bring leathers.” 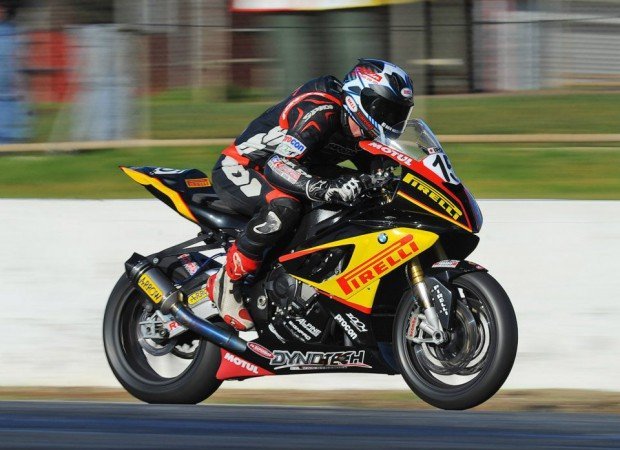 Do I need to tell you that ain’t me? Nor is it what I will look like.

He’s fit and strong and at least two axe-handles across the shoulders, but he’s still less…um, physically prepossessing than me. I have three-axe-handle shoulders and a belly to match.

“How do you figure?”

“The reason it’s the last of the Superbikes is now with Formula Xtreme (Terry O’Neill’s series) and ASBK (the competing MA series) adopting “Superstock” rules. The only place you can use a modified engine is in Formula Oz (The anything-goes class in Formula Extreme). The thing is no-one will spend big money on a Formula Oz-spec bike any more. The bikes that we (Honda, us and some others) used last weekend at Phillip island were last year’s ASBK-spec bikes; basically a stock bottom-end, but anything goes with cams, springs, heads, etc. The reason Ben is racing Formula Oz is we simply didn’t have enough bits to make four stock bikes when we had previously run four Superbikes.

While I agree with the cost-cutting aspects being good for the sport, and let’s be honest, the BMW doesn’t struggle for power, but if you look at last year’s ASBK racing the times were closer and machinery wins more varied with the old rules. Ask most riders and they will tell you last year’s rules were just about right. That and the fact that if you are lucky enough to get a ride overseas and you have only ridden a stock bike with no data-logging to give the team feedback you are fucked! The punters who come to the track would rather look at some trick bits than something they have at home and given Terry’s rules, most punters have more mods than we do! You only had to look at the big screen at Phillip Island every time Glenn went down the straight they would put up his top speed. Did the bike steer? No, not really. Did we win, no. But we had a crowd of people looking at it all weekend and talking about its speed and power .” 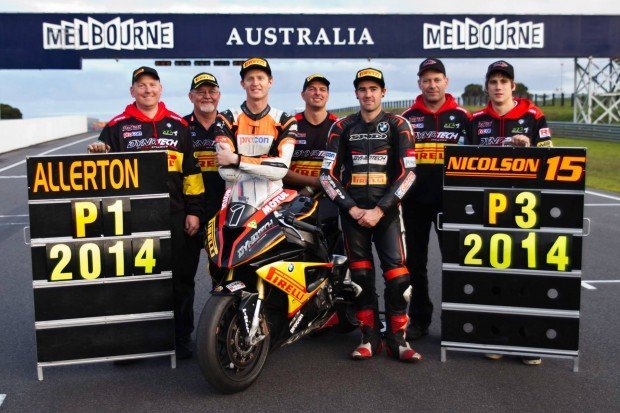 Wait until I get on the sucker. There will be three figures after that P.

“Glenn races in the FX Superbike class, which is stock bikes and the same basic rules as ASBK was this year. Ben is in the Formula Oz class, which ASBK called Evo Unlimited or something this year. The reason they have these classes is there are a lot of old Superbikes still out there and punters who want to race them, but there won’t be any new models I wouldn’t think, as people (that is the the top teams) won’t be developing them in the future, so development kind of stops here and continues within the confines of the standard motorcycle. And looking at all the new shit posted on the web yesterday is still exciting, but just not in a WSBK kind of way. That’s why I want you to ride it, to see what Glenn, Wayne, Jamie, etc. are missing out on now.”

“That’s nice, “ I said. “Here I was thinking you just wanted to fall around the place laughing.”

“Yeah, that too,” Shane smiled.

We chatted for a little longer, agreed that I would ride the bike at some stage in the near future, when the event could be recorded for comedic purposes, and I was invited back to Sydney Motorsport Park later in November to watch them race.

Shane smiled. He does that a lot.