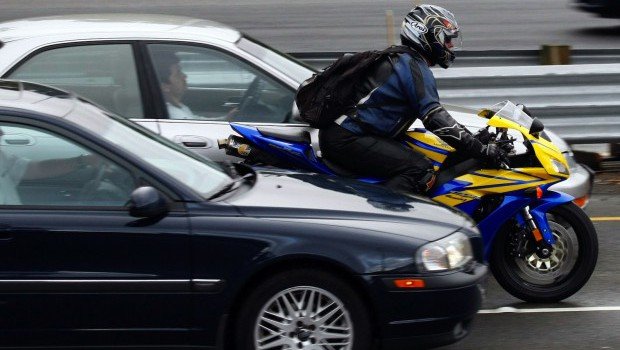 I’m sure there’s not a motorcyclist in this country worthy of the name who doesn’t know that NSW has legalised lane-splitting as of the first of July. The powers that be call it “lane-filtering”, presumably because that sounds less confrontational than “lane-splitting” and strange little monkeys on the Internet have made sincere efforts to state that the “filtering” is squeezing past stationary traffic while “splitting” is zooming between moving traffic.

That is all bullshit. Splitting is splitting. It happens on the road and it happens when axes deal with logs. Filtering is what pool equipment does. The new legislation allows for a rider to ride between slowly moving traffic. But ultimately it doesn’t matter what you wanna call it. The point is that no longer do NSW riders have to fear a booking by the police when they lane-split. I split just yesterday past a Highway Patrol car and it was glorious.

So NSW is good in that regard. The other states not so much. Sucks to be them, I guess.

Anyway, I figured some of you might be interested to know who was actually behind this great win for motorcyclists – following as it does on the heels of the impossible and equally glorious win we all had over the CTP issue last year. I believe in giving credit where credit is due (just as I believe in exposing amateurism and dumbness), and the blokes behind this victory should never be buying their own beers while they ride among us.

It is also a salutary lesson to the publicity arm of that firm of compensation lawyers down in Victoria, the amateurish and ineffective Victorian Motorcycle Council. Pay close attention, mugwumps. This is how you represent motorcyclists.

I asked Dave Cooke, who spearheaded the battle, to explain how this fight was fought and who fought it, and what its significance is. And I would express my personal gratitude to him, CJ and Rob for everything they have done and will hopefully continue to do for us motorcyclists.

The 1st of July was a good day. A very good day. It was the day NSW came into line with just about every other advanced civilization on Earth and legalised lane filtering for motorcyclists. But the significance of this was much more than simply the legalisation of something we’ve been doing for years anyway, and largely without much concern from the NSW Police. Sure, they’d occasionally ping someone for filtering if the mood took them, but for the most part, it hasn’t been high on their list of offenses that justify a good Tasering by the roadside. 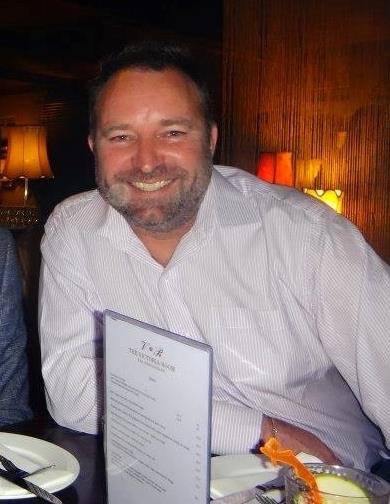 Dave has every reason to smile

This decision by the NSW Government signifies, quite publicly, a point in time when motorcyclists finally gained a seat at the big table, and not just one of those seats where they let you speak occasionally, just so they can tick the box marked “consulted with stakeholders”, all the while ignoring your comments and sniggering behind your back when you leave the room. We now find ourselves recognised as significant and valuable contributors to the road safety conversation, and we are taken seriously as an important, and rapidly growing, road user group. 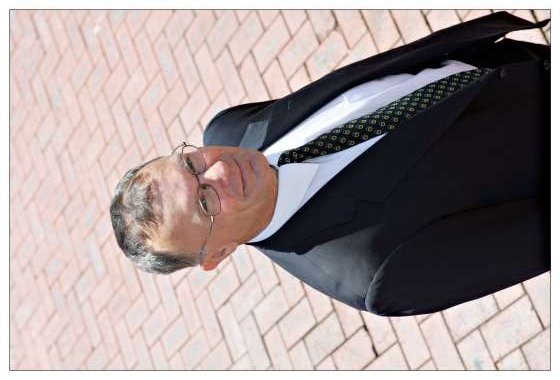 Mr Stanford – always a force to be reckoned with

There’s a number of reasons why this has happened, but by way of illustration, lets take a look at the process that led to the filtering decision. The beginning goes back to the days before the last NSW State election, when the Coalition was still in opposition. Representations were repeatedly made to both the previous Labor Government (who largely ignored us) and the Opposition, via Roads Spokesperson, the honorable Duncan Gay. This lobbying was done by numerous people, most notably Guy Stanford, Rob Colligan and Christopher “CJ” Burns in their roles at various times as MCC Chairman, and also by Rob when he became the manager of the NSW Motorcycle Alliance. Others have been involved in the process, but those guys led the charge. 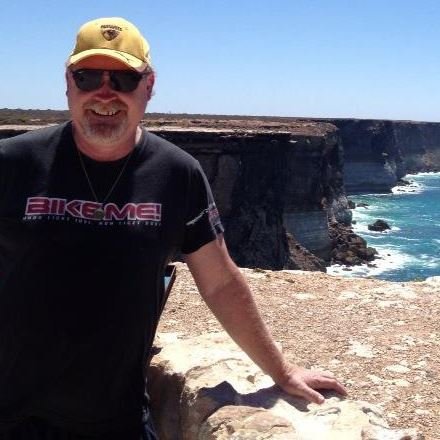 Rob Colligan, one the most effective chairmen the Motorcycle Council of NSW has ever had

Back then, Duncan (I’m sure he won’t mind me referring to him by his first name) gave his word that if he got into government, and if he stayed in the roads portfolio, would seriously look at legalizing filtering, if we could prove that it would improve traffic flow, and if we could prove it was safe. Notice the amount of “If”s in that last sentence. Not normally a good sign. Thankfully for us, the Coalition did win power, and Duncan did stay in the Roads portfolio as Minister for Roads And Freight. In an age where politicians have become so adept at destroying the public’s opinion of them as a breed, Duncan proved to be as good as his word. Not only did he take a good look at the filtering arguments we put forward, but he committed to working out for himself whether or not it was a good idea, and he instructed the Centre For Road Safety (CFRS) within Transport For NSW to conduct a filtering trial in the CBD of Sydney. That’s about the time I became the Manager of the NSW Motorcycle Alliance.

A working party was set up including CFRS staff, police and us motorcycle representatives. This working party was to set up the details of the trial, and complete other work related to the project as well. The project had a budget that ran into seven figures, giving some idea of the commitment that the Minister had in it. The trial area was set up in the CBD, complete with new video cameras installed to monitor rider and driver behavior, and devices we lovingly call “turtles” were installed at strategic points. These devices use speed-sensing technology and have the ability to determine whether a vehicle is a bike, car or truck, and which lane it is traveling in. An external company was engaged to collect all the data from these devices and collate it into something meaningful at the end of the trial period. 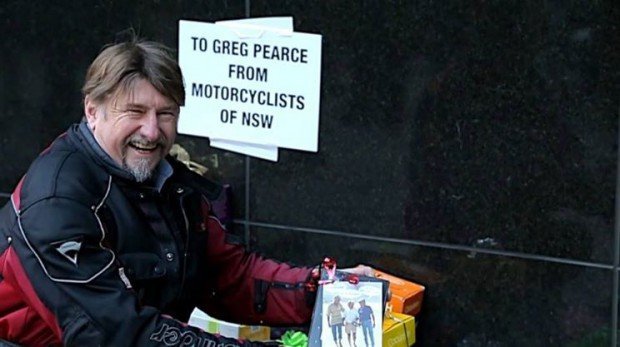 CJ delivers the final cask of wine to the office of Greg Pearce, former NSW Finance minister who liked a bit of a drink

Once the trial was completed, with no real negative outcomes, work commenced on the political process of developing regulation. This process basically involves coming up with policy that will keep other road user groups, police, insurers, public servants, and pretty much everyone else happy and satisfied with the safety outcomes, and ultimately also lead to good outcomes in terms of operation on the roads once implemented. Keeping everyone happy is not easy, and often leads to the policy being a compromise, which is the case here. But the compromises we made are ones we are happy to accept to get this across the line. We can always look to push for changes later once we get things running well.

It’s not the only battle we’ve won in NSW recently. There was the CTP fight a few years ago that we won, and then last year the motorcycle groups spearheaded the campaign against the current government’s proposed CTP changes. We won that too, and won a lot of admirers and respect for the way we went about it. That fight embedded the motorcycle lobby as serious players in NSW, as we led the fight in front of organizations such as the Law Society, The Injured Persons Association, Cycling NSW, etc.

All of a sudden politicians of all stripes were opening doors for us and wanting to talk, and even seeking us out. Now there is the fight to get the helmet laws fixed, and try and make it easier for helmet companies to bring their products to Australia, while maintaining or even improving safety standards.

The problems with helmet laws around Australia has been worked on relentlessly by people like Guy Stanford at a national level, but the lack of will on the part of the ACCC and other bodies to fix it means we have now taken the fight up in NSW, hoping to once again lead the country to a good solution. The CFRS is extremely supportive, and we are hopeful that together we can create a change that will drag the rest of the country along with us. 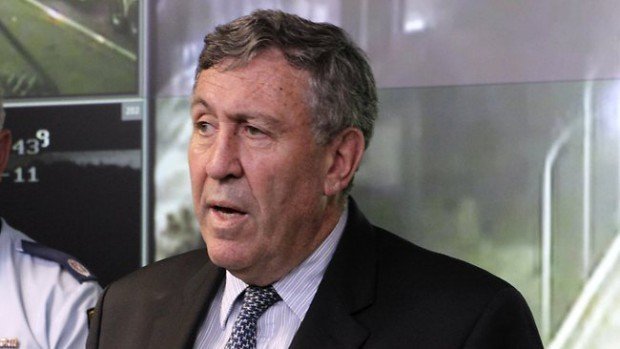 The Right Honourable Duncan Gay – apparently an honourable politician. Cheers, Mr Gay. And we shall be watching.

So the big take out from this isn’t that filtering has been legalized. That’s just a great by-product. It’s that in NSW we have a Government and a Minister that has recognised motorcyclists as legitimate. We have a seat at the table. And it’s a seat that has a real voice. But it’s been a perfect storm. We have some good people speaking for us who understand how to play the game.

We have a Roads Minister who is a genuinely good guy, who acts with honour and lives up to his word. He has changed the culture within Transport and Roads And Maritime Service (formerly the RTA) and allowed the CFRS to break free from the shackles of the RMS and do some great work. The CFRS team is open to our input and suggestions, and work extremely well with us to bring about positive change.

They recognize us as experts on motorcycling issues, rather than just pains in the arse who whinge about stuff all the time. For the first time, we have government departments working with us, rather than against us, which is how motorcyclists have traditionally felt. The relationship we have with the NSW Government is the envy of every other state motorcycle lobby group. If they don’t envy what we have, they should.

But we have to stay vigilant. We need to keep the right people doing the talking and keep working hard, because we are only ever an election away, or even a cabinet reshuffle away, from it all turning to shit again. In a perfect world, Duncan will be Roads Minister for another ten years. But I doubt we’ll be that lucky.