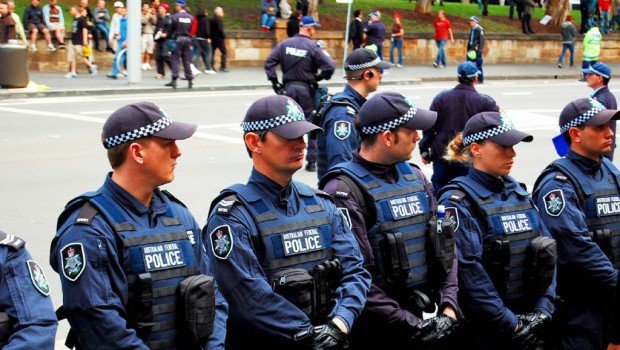 Police in their simple-minded, childish view of reality, always imagine themselves to be “the good guys” fighting an endless war against “the bad guys.”

But the sorry truth is quite different from what their twisted little brainwashed minds imagine. Far too often, Police are the bad guys, and very few of them will ever have the moral courage to face that fact.

All across Australia their criminal masters have given the Police the green light to beat up and torture, and extort their powerless victims (out of view of the news cameras). And even those who don’t stoop that low almost universally cover up the crime for those who do. That’s crooked, and that’s police tradition.

The code of silence. 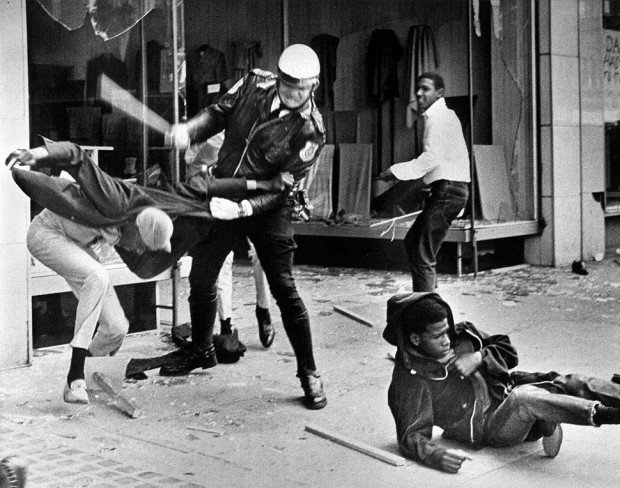 Even if most cops don’t beat up, torture and sodomise their prisoners in the watch-houses and jails (and many other places), they are all still the violent enforcers of grossly unjust laws.

“Laws are only words written on paper, words that change on society’s whim and are interpreted differently daily by politicians, lawyers, judges, and policemen.

The Police throw good, decent people in jail for exercising their right to freedom of speech and assembly. Only the very best people in this country have the uncommon courage and morality to publicly protest Australia’s international war crimes and thoroughly evil, corrupt system – and the criminal, uniformed thugs of that system are only too eager to demonstrate to them just how evil it truly is.

Clearly, a great many Police have serious psycho-pathological problems. 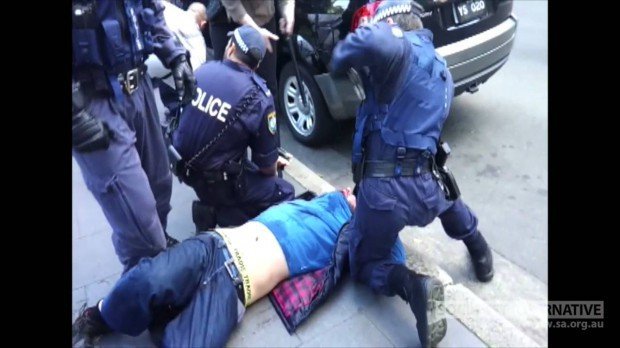 Of course a lot of Police are ex-military themselves, so some of them are trained, experienced, cold-blooded murderers even before they join the force.

We’ve got some very evil, criminal people walking around with guns and badges in this country. But whatever their backgrounds, whether they’re bad cops or so-called “good” cops, they are all the loyal servants of the criminal rulers of this country.

How can you be a “good” person if you’re an enforcer of unjust laws and a servant of war criminals? You can’t be.

In Australia you cannot be a genuine “good guy”, and a cop, at the same time. If you’re a cop and you imagine you’re on the side of “good”, then you’re in dire need of a serious reality check. The system is violently evil.

Cops serve the system. Genuinely good men and women do not serve an evil system. 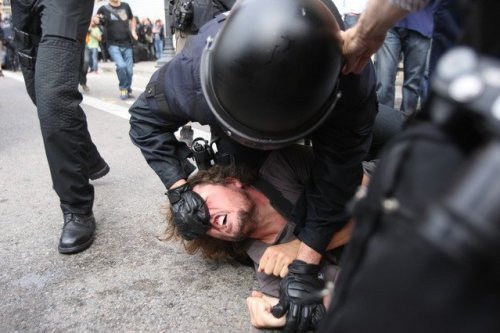 If you honestly want to be a good guy then you must quit the police force when you are required to do something you know is evil. Then you must go to work for a good cause instead. That means working against the system. If you try to stay on the force and do exclusively good, morally defensible things, sooner or later you will have to disobey orders or go against the grain in some way. Sooner or later, therefore, every cop who has a genuine moral conscience will be fired, or they will quit.

Police who are unreservedly loyal to the bullying Australian system are always bullies themselves. They enjoy the nasty side of their job because it allows them to indulge their sadistic impulses, and even get paid for it.

It’s somewhat like the military, but much better, from a sadist’s point of view. Basically, in the military you’re nothing but a glorified slave. You are compelled to play the role of an obedient, disciplined masochist in relation to every twisted scumbag who’s a higher ranking officer.

But on the police force every swaggering pig is an officer. 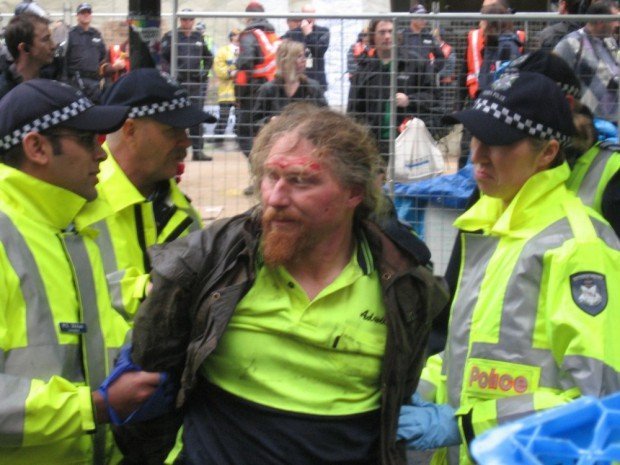 They all get to play the role of sadist and crack the whip. Every cop plays the role of “officer” toward a whole community of “civilians” – many of whom will inevitably be vulnerable and powerless.

As it is with all bullies, a great many Police are inclined to be self-righteous and arrogant.

Pathological personality traits are useful for a job which requires one to aggressively intimidate other people. In spite of appearances, however, bullies are actually the most fearful of people.

Their arrogance is a cover for their fear.

Police are afraid of a lot of things, but what they fear most (besides justice) is to face the fact that they are not “the good guys,” that they are just another species of gang members. All police departments are just glorified gangs, and far too many of their members are truly evil, sadistic thugs.

Even one such criminal in uniform would be one too many, but police departments across Australia have hired legions of them. Those few cops who might want to bring the uniformed criminals to justice are required to be silent if they want to keep their jobs. 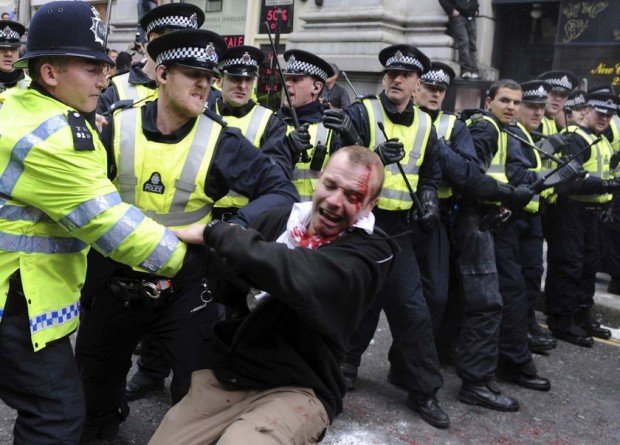 No matter how cops might rationalise their silence, however, it doesn’t change one basic moral and legal fact: silence is complicity.

If such cover-ups are done by anyone else, cops call it “being an accessory to crime”. But when Police themselves are accessories to crime they call it “loyalty”. All gangs are basically the same.

Police can delude themselves all they want, but the experiences of literally millions of people prove that too many “police officers” are in fact nothing more than gangsters in uniform. 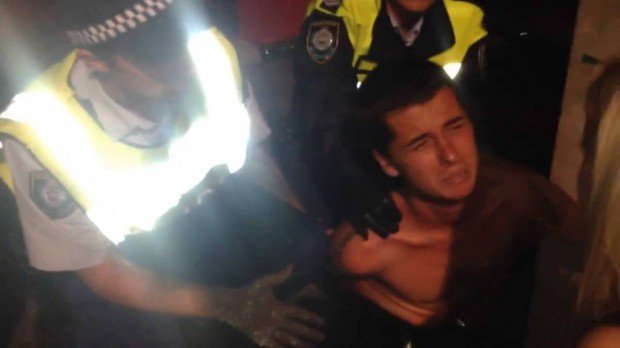 Police are ultimately the hired guns, the “muscle”, of the most powerful Mafia in Australia- the corporate/banking plutocracy. This is not unique to Australia of course. Pigs are the strutting prison guards of all defeated and suppressed societies. And it’s nothing new.

Police brutality has a long and ugly history in Australia.

But it’s not getting any better. All across Australia the Police are becoming increasingly militarised, inhuman and brutal. And for one reason only: these arrogant, violent, sadistic goons are carrying out the orders of their criminal masters. 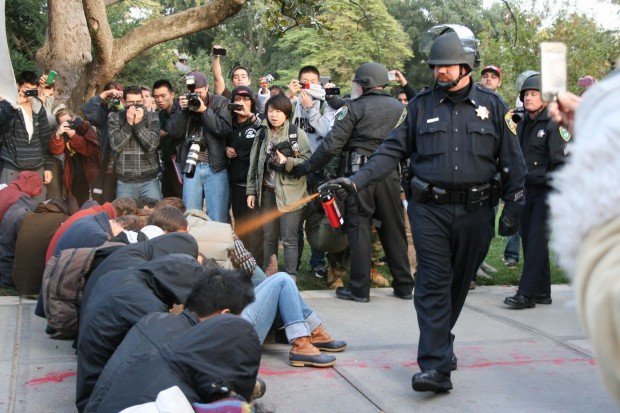 Australia’s criminal plutocracy is not evolving. It is in fact devolving, mutating steadily backwards into an increasingly fascist, parasitical aristocracy. And these sociopath dinosaurs will drag all of Australia back down into a political Palaeolithic age – if the majority of people let them.

That would certainly be a tragic fate, but even if most Australians wimp out and allow the fascists to take over, you can be sure of one thing.

Sooner or later, all dinosaurs have an appointment to keep with their asteroid.