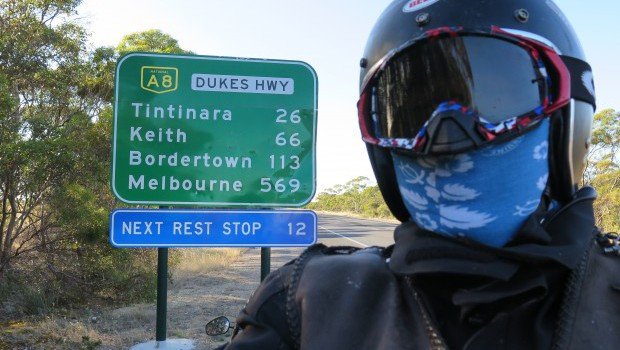 I wish to trumpet the praises of riding alone, and I wish to trumpet them loud and long. I wish to do this because it beats moaning about my current lot through a fog of pain-killers, and worrying about how I’m going to compel that block of impacted fecal concrete that’s been nestling in bowel for the last week into the toilet bowl without my internal organs exploding.

So while I shall, in the fullness of time and at Boss Brumby’s behest (and because it makes him giggle) tell you all about how much fun it was face-planting a VROD into the side of an SUV, I first wish to tell you how important it is to reconnect with the pure essence of motorcycle riding.

And going for a long ride by yourself is the very heart and soul of matter. 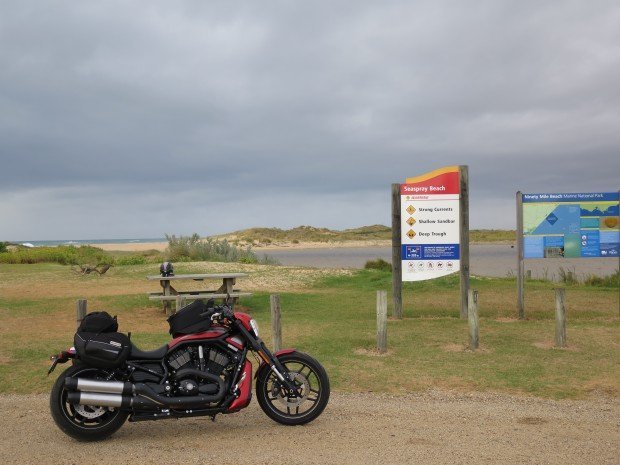 Seaspray. It was going off.

Now I don’t mean ducking out for a coffee on a Sunday up the Black Spur, across to Mt Glorious, Hahndorf, or down the Putty.

I mean a long ride. Seven, eight, maybe ten days on the road, on your own. Running on your own schedule. Planning your own petrol stops. Deciding when you’re going to have a beer, a ciggie, or a piss. Being your own beast, as it were, and not some kind of grinning, wide-eyed herd-animal being swept along with the other cattle, or blindly following the rider in front because…well, because that’s just the easy thing to do…um, and thinking for one’s self is such a chore, isn’t it?

Now don’t get me wrong – though I know some of you already have – I love a parade as much as the next bloke. And I know that there are many riders for whom the social aspect of riding is the ne plus ultra of motorcycling. Getting all leathered up with your mates and going for a structured, ordered and placid parade (in strict formation) with Road Admirals, Corner Markers, Sweepers, Minders, Nannys and Breastfeeders is all kinds of beaut. One big, jolly, brothers-of-the-handlbars, thumb-gripping, nod-fest. Which is fine. And more power to all who see that as motorcycling. It certainly beats the hell out of buying a caravan and hauling it all over the country at 60km/h.

And I do get the whole riding-in-a-pack thing. I spent a decade belting around the place with an outlaw motorcycle club, and I shall be the first to tell you how pants-jizzingly magnificent it was to ride into some town, all close-knit thunder, ape-hangers and sheath-knives. Sure, there weren’t people lined up on the streets waving to us as we rode in, but then we weren’t all about public acclamation, either.

So yeah, I do get the whole group-ride paradigm.

But the true essence of motorcycling is the joy of being alone and riding alone. It is the pleasure you find in your own company, chasing the glorious grey ribbon and being scoured by the wind.

When I first took up riding motorcycles at the age of 16-and-a-bit, I lost all my friends. None of them rode bikes, none of them wanted to, none of them understood why I did, and so we very quickly had nothing much in common anymore. I was good with that. I made other friends who shared my passion, and got on with it.

As the years flowed on, I always made time to get on the road by myself, bang out some miles, maybe stare into a campfire, and just make sure I was still connected to all those important parts of me. You just can’t do that if you’re on a schedule, waiting for people to fill up their bikes, find their keys/sunnies/wives, or who have taken a wrong turn and now need to be found before the sun goes down and the werewolves come for them.

Unfortunately, times have been tough for me in the last few years. And my life has not really been my own. As a result, I have not been able to touch the solitary truth of motorcycling as much as I might have wanted or needed to.

But just the other month, at the end of summer, I nudged some of the planets into alignment (bastards never looked like they were gonna line up on their own), took the magnificent VROD Boss Brumby had cajoled from Harley-Davidson for me, and hit the road for 10 days.

I had nowhere to be at any particular time.

There was nothing specific I had to do, and there was no-one I really had to see.

Sure, I had told various mates I might be in their neck of the woods at some stage and they all offered me shelter and companionship – but as for deadlines and commitments…hell, I left them further behind with each turn of the VROD’s fat-bitch rear-tyre. 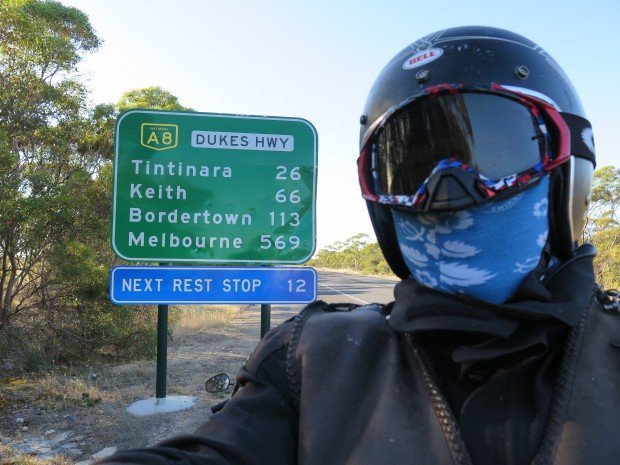 I rode the coast, from Sydney to Phillip Island, then on to Apollo Bay, Port Fairy, Mt Gambier, Robe, Kingston SE, and on to Adelaide, where I turned east and spent some days rolling through various parts of Victoria and into Melbourne, before heading back home. Just under 6000km in 10 days. No Iron Butt stuff, but then I wasn’t setting records. I was just riding, and stopping, and looking at things, and thinking, and riding, and detouring, and making impulsive decisions, and riding, and walking around in my underpants, and indulging myself, and denying myself, and eating healthy and eating unhealthy…and hell, just doing whatever the bastard hell I wanted to do whenever the bastard hell I wanted to do it.

It was a type of freedom so rare and precious these days, it took me almost 1000km to comprehend its pure glory.

I was parked on the side of the road, somewhere near a town called Seaspray. It was drizzling and grey and I was having a sip of scotch and looking at some nearby cows. And I suddenly realised that the biggest decision I had to make that day was whether to have another sip of scotch. Or not.

You should try it sometime.