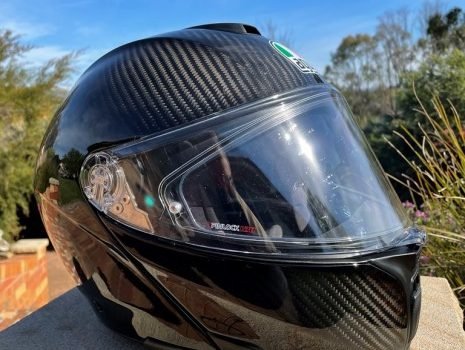 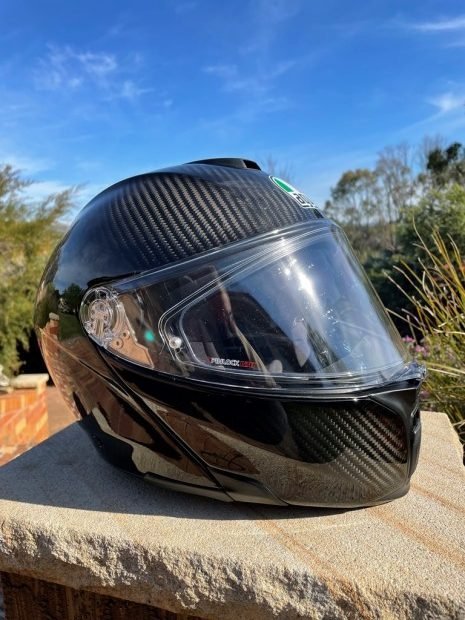 Let me make a confession. I have never been a fan of modular helmets. I understand the concept behind them. Flip the chin-piece down and it’s a full-face – flip it up and it’s an open face…sorta.

Except not a single modular helmet on the market was entirely true to that lofty ideal. So while the concept is sound, its execution was invariably less than ideal.

Modular helmets were consistently heavy – often heavier than the full-face lids they were meant to be with the chin-piece lowered.

They were also kinda noisy, and if you lifted the chin-piece at say 120km/h, your head would be torn off your neck.

And let’s face it, they all looked a bit shit. Misshapen is the right word. Awkward is another right word. They didn’t quite manage to carry off the svelte sexiness of a killer full-face, and failed utterly at being a decent open-face. They were always a Gumby-like thing.

So I have always looked at them somewhat askance.

And then AGV sent me its latest effort in modular helmets – the Sportmodular – and you may consider my mind has been changed. I always like it when that happens. 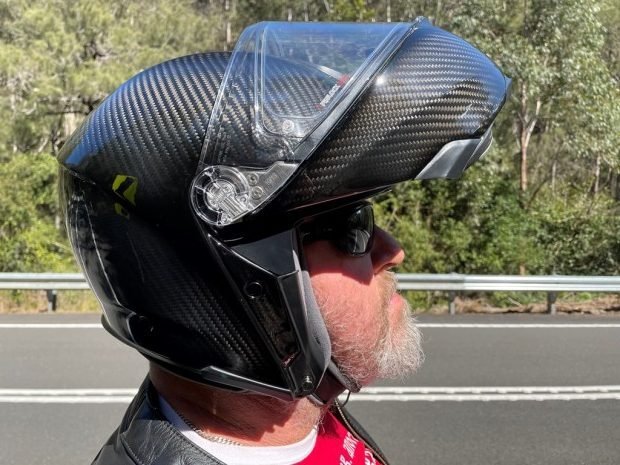 It’s pretty cool that you can do 140 with it up like this and not have your head fall off.

I even made a breathy “Wow” noise when I pulled it out of its bag. And for more than one reason.

Firstly, it is simply gorgeous. It doesn’t look like a modular helmet at all. There’s not a hint of the Gumby about it.

“What a gorgeous thing,” my wife said as I hefted it and turned it this way and that, letting the light catch its carbon-fibre swoops.

“You’re not bad yourself,” I smiled. “But what do you think of the helmet?”

She gave me one of those looks – a mixture of pity and exasperation which lives in every wife’s repertoire – and said: “I was talking about the helmet. Perhaps consider not taking it off when you’ve put it on.” 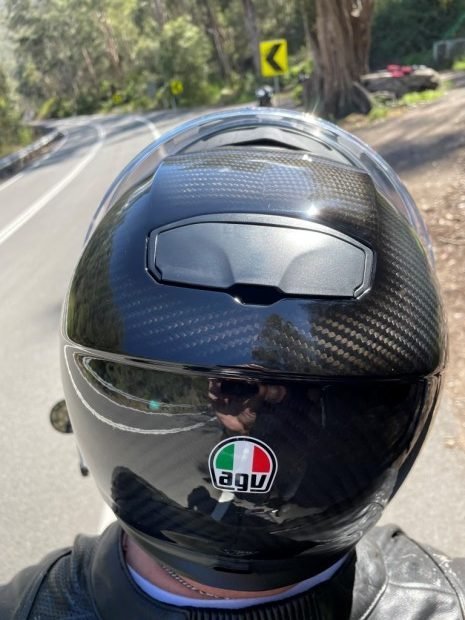 That plastic thing there is a spoiler and underneath is the exhaust port, which works whether the spoiler is up or down. So your head is like a fighter jet.

So not only is AGV’s all-new Sportmodular lid a sex-dream of carbon-fibre craftsmanship (and yes, the whole lid is carbon-fibre, even the chin-piece), it’s lack of weight is astonishing.

Few things are more important in a great helmet than its weight. Surely you get that. In terms of comfort, the lighter a lid is, the less fatigue you’ll experience. But more than that, it’s a safety issue because of inertia.

Inertia is a bastard of thing. If you have a 1800gm helmet on your head and things go pear-shaped, your spine has to cope with an extra 1800gm of weight (on top of what your head weighs) traveling at whatever speed you’ve crashed at, and then maybe stopping suddenly.

So the lighter your helmet is, the better your spine will be able to cope with a bad situation. So maybe consider that before you go sticking GoPros to your lid to film your boring rides, and always try and buy the lightest helmet you can. 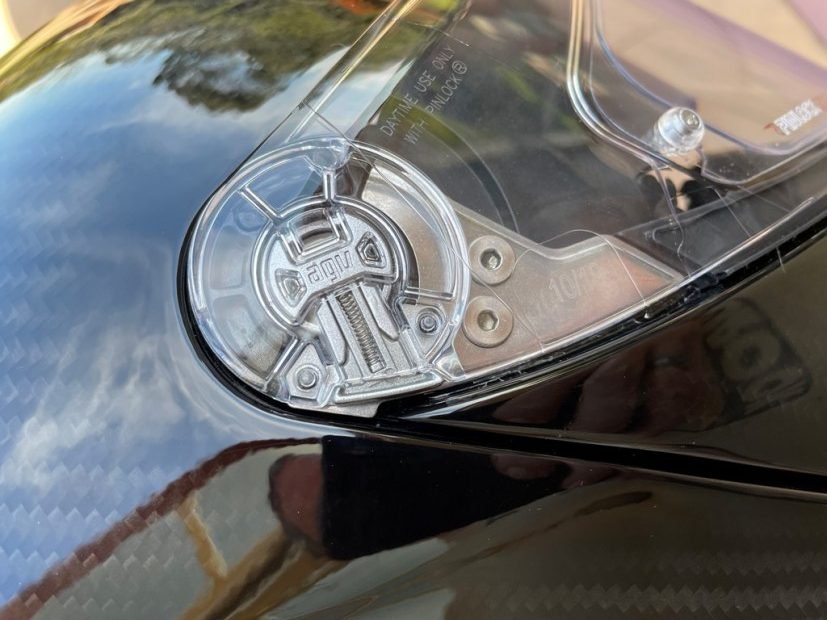 See the little flat thing at the bottom of the spring? You push it up, the visor releases. It then just clicks back in when you want to replace it. Simple. No swearing required.

AGV’s Sportmodular is a revelation in that regard. It’s stupid light. At 1295gm, it’s the lightest modular helmet on the market. But despite its bubble-like heft, it’s packed with everything you’d expect in a top-shelf AGV helmet. And thus it achieves the same level of head-protection as AGV’s brilliant top-end racing lid, the MotoGP Pista GP R.

The visor is optical-grade Perspex, as is the adjustable, flip-down, internal anti-scratch sun-visor. It’s extremely well-ventilated with two front vents and an adjustable exhaust vent at the rear.

Its aerodynamics are top-notch. It boasts zero dynamic weight at 130km/h. So that’s the speed I flipped the chin-piece up at and braced for the neck-savagery. There was none. So I dialed it up to 140…and a bit. I started to feel the drag at that speed as the chin-piece caught the wind, but it was still not unbearable. And that’s quite a thing. Few people will ride with the chin-piece up at 160km/h. But if they want to, they can. Just sayin’. 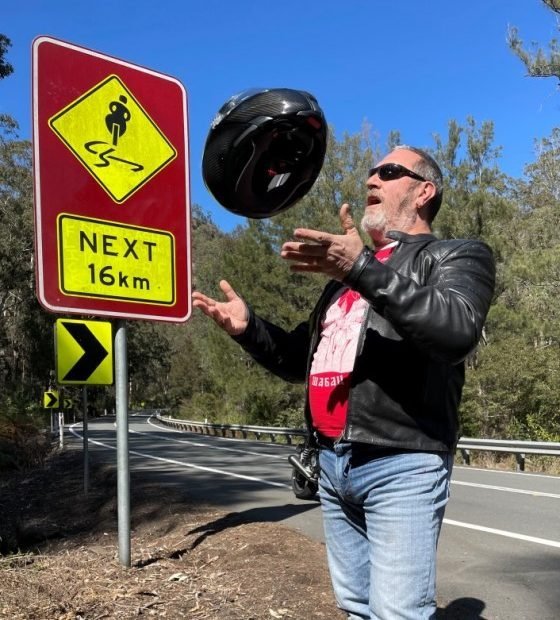 It’s so light it will float off in the breeze. Honest.

Internally, it’s pretty lush. It’s got all the latest instant-sweat-absorption material, which is wedded to an antibacterial treatment, and material called Microsense, which is meant to be the last word in comfort for your face-skin. Rub your face against a kitten. Feels like that.

Of course, the lining is removable and washable – and you get a removable nose-guard and wind-protector that fits in the chin-piece. 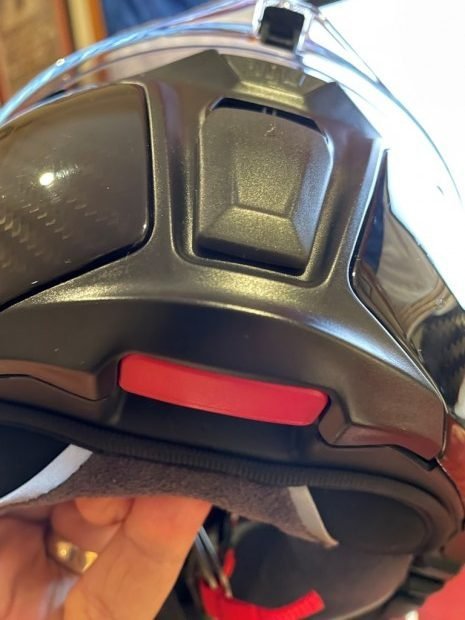 The red thing? Hook your thumb under it, and pull out and down and the chin-piece comes up.

At speed, and I mean speed because Mother Putty is deserted at the moment, the Sportmodular is spot-on. It’s way quieter than most modular lids, but there is some wind-noise once you start sailing over the 100km/h mark. Interestingly, when you turn your head slightly to either side, the wind-noise disappears. But I can’t ride like that. People will think I am deformed.

It’s satisfyingly quiet, and while it’s not the quietest lid in the world, it’s not far off that mark, to be honest. And the noise doesn’t appreciably rise even when you flip the chin-piece up.

Peripheral vision is excellent, and it will even work in a race crouch with your head forward and your eyes looking up. And it is glasses-friendly.

I also liked the “natural” movement involved in releasing the chin-piece. You pull down and out with your thumb, rather than pushing up on a button. And the neat little tab on the visor itself makes gloved-hand operation infallible. 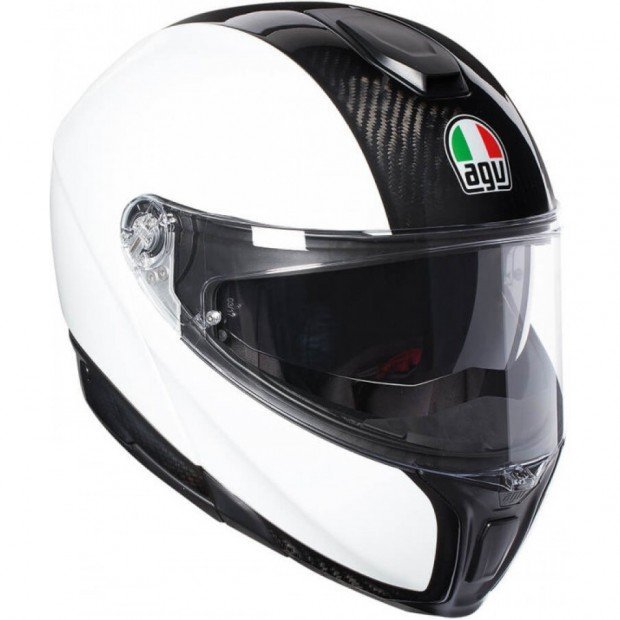 Lots of white space you can utilise to write on in Texta.

It comes with a Pinlock insert which I fitted with zero cursing and hammering, because AGV’s visor-release system is one of the easiest on earth. Big points for that. 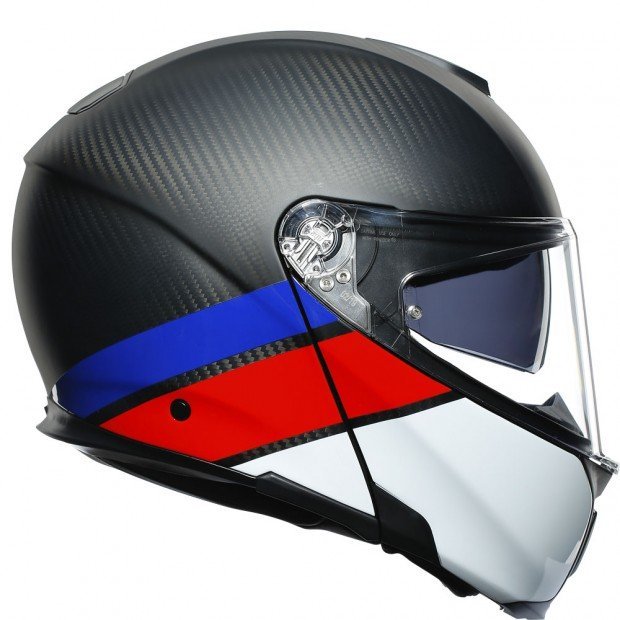 Yes, it comes in Serbian colours!

So what else? It comes in three shell-sizes if you have a massive brain and your skull is bigger than most, and the one I have is the glossy carbon one, which is $899, as is the matte carbon version. For a hundred bucks more, you can have some colour options if you’re unable to rock gorgeous plain carbon.

And did I tell you it looks hot-as? Yeah? Well, I just told you again.

WHERE CAN I GET IT?

You can go HERE, or your nearest AGV dealer.