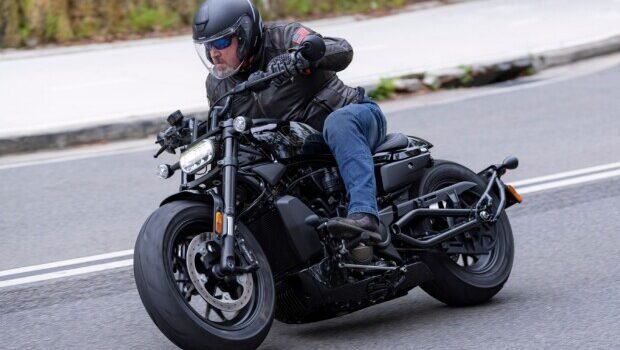 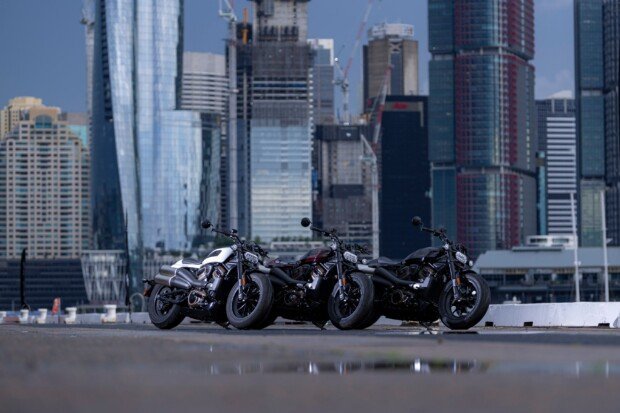 These are your colour choices.

And just like that, Harley-Davidson has built a modern, kick-arse Sportster.

Gone are the days when Big Twin riders would laugh at Sportser riders, call their bikes “Skirtsters”, and hose them into the weeds. 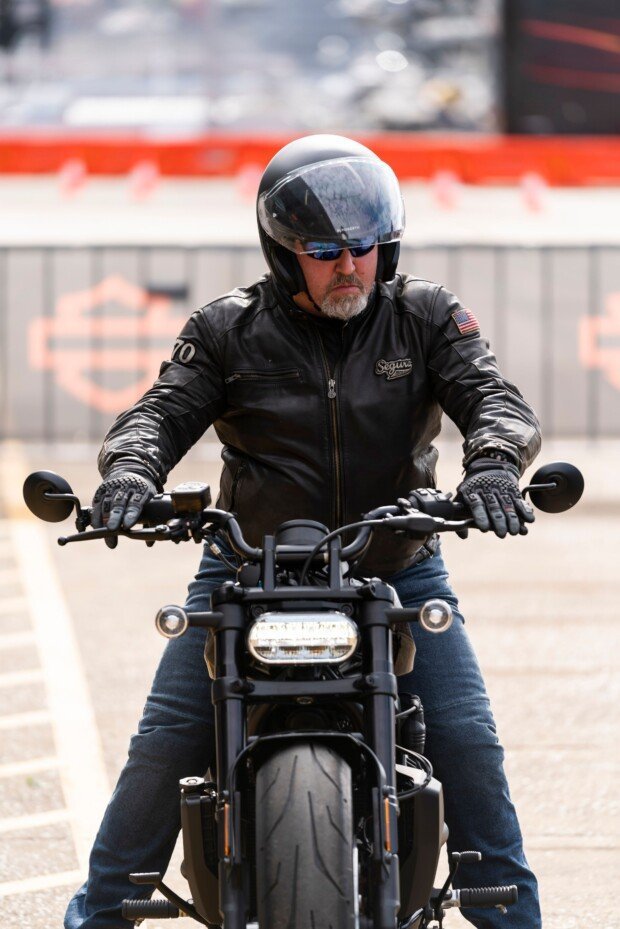 What does this button do? Oh…that. Cool.

I’m fairly sure that’s not how Harley originally wanted its longest and most fabled line of bikes to end up, but that’s what happened.

But that’s not how it began. 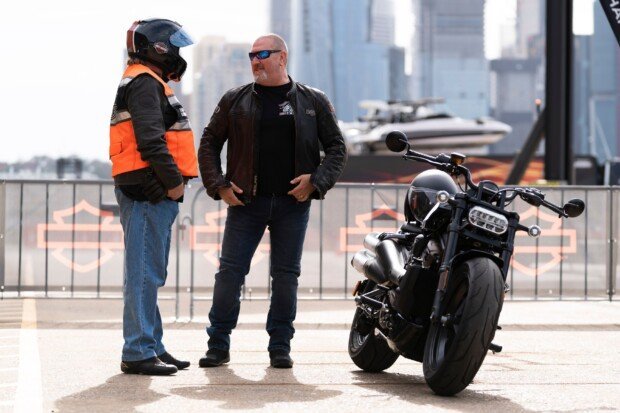 “So keep it out of the harbour? Sure…”

And to understand how we all got to here, astride an objectively fast, high-tech bike that will hold its own in many situations, we have to appreciate what led to this.

The Sportster, as its name indicated, was intended to be sporty. And in 1957 it was. 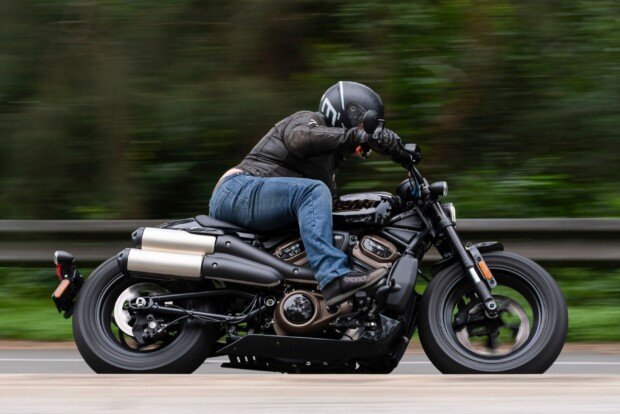 No, it’s not Nurburgring. This is a different Green Hell.

But that concept changed, as first the English and the Europeans, and then the Japanese kept redefining what “sporty” meant in terms of motorcycling.

Harley, being built on a foundation of tradition and lifestyle, and with its own massive domestic market, did not change. It was going to do what it was going to do, and it kept on doing it. 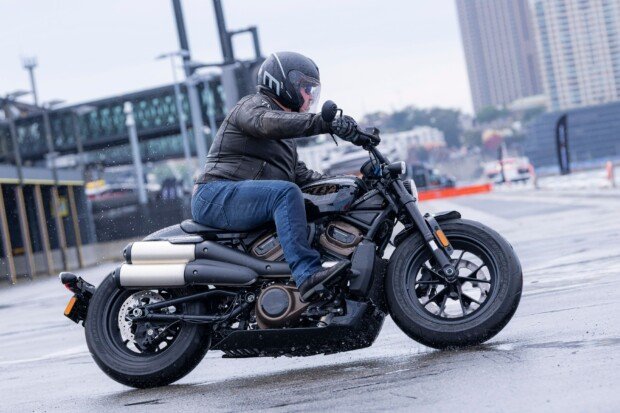 This was the wet section of the launch. 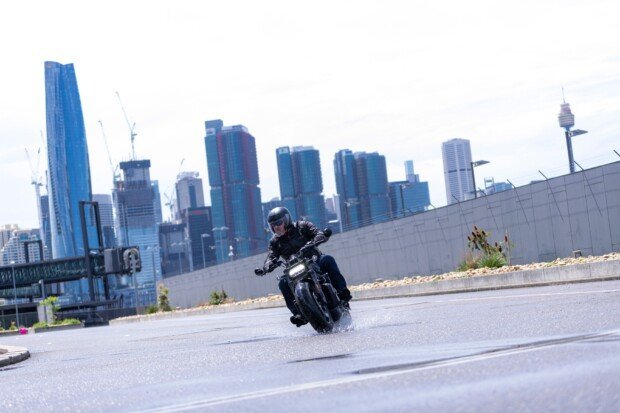 Splish-splash, do not crash…

And then it suddenly did.

Sales began to slow and then they began to drop. Their traditional demographic was ageing. The once mighty Harley Owners Group had become a sight gag. 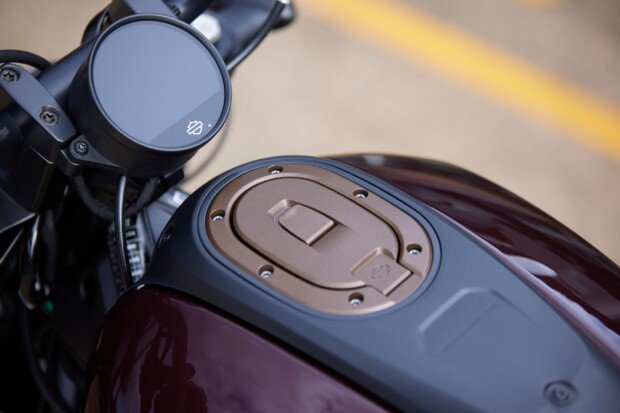 Outlaws still rode Harleys, so remnants of that magnificent marketing cachet still kinda worked, but as governments around the world decided that looking scary was a crime and began to legislate one percenters out of the public eye, there was a seminal shift in how younger people – potential customers – viewed Harleys.

Gone were the hard-muscled, tattooed 20- and 30-year-olds blasting up the highways in packs, their shotgun pipes barking rebellion at the world, their tanned, long-legged girlfriends clenched against their blokes’ colours, breaking the hearts of upstanding family men in cars. 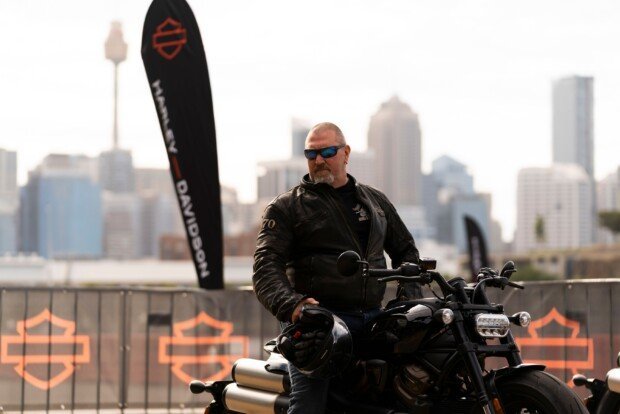 Harley has always eschewed the outlaw aspect of its bikes. Which is understandable from a corporate viewpoint. But it created all sorts of problems for its marketing department, which could not tap into the real meat of the brand’s appeal, and instead created an ersatz version of the real thing, in the form of HOG.

But it wasn’t fooling anyone. Especially not the young blokes who would once have sold their girlfriends to the nearest strip-club to buy a Harley. 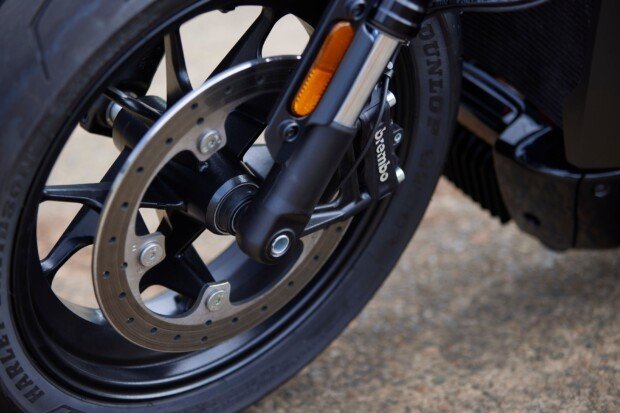 And the Harley they would have bought was the Sportster. It was the most affordable (for them), sounded just as savage as the Big Twin if you put the right pipes on it, and could be relied upon to offer the rider a taste of the ineffable cool that awaited him when he graduated to a Big Twin. 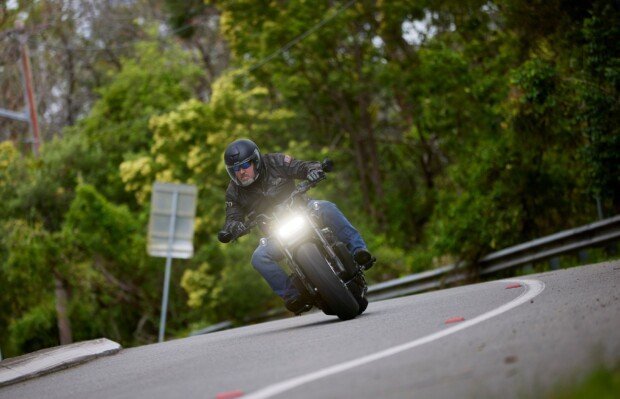 Just as on the Pan America, my fat thumb snags the high-beam switch now and again.

Occasionally, the iconic little Sportster tanks would find their way onto a Big Twin swanning its way through the custom bike scene – and that tank remains one of the most identifiable petrol-holders on earth.

But the times were doubtlessly changing.

HOG did not help matters. It consigned its female members, the ones who rode, to Sportsters.

The Perfect Storm of Uncool was created. 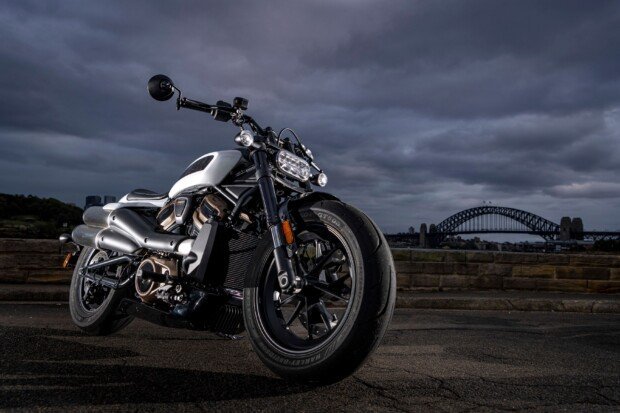 The meanest-looking white bike ever made.

Ageing dodderers bought the big Ultras. Their hesitant wives wobbled around on Sportsers. They had hat parades. They rode everywhere below the speed limit and adorned themselves with merit badges, shamelessly aping outlaw paraphernalia, and no self-respecting teenager wanted to be like that when he grew up.

Harley fought back a bit. It produced the Sportster 48 and the Iron – both stunning-looking exercises in motorcycle bad-arsery. But hugely compromised in terms of performance, ergos, brakes, and handling.

Its traditional demographic did not care. It could not ride well enough to want or need a bike that performed. 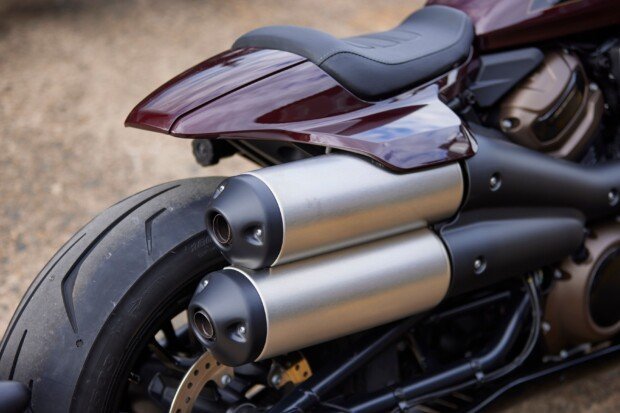 The back-end is hell cool-looking. But it does radiate heat. And if you have a pillion, you’ll need a seat and pegs to accommodate her. Of course, that’s available. I doubt she’ll be happy though. Oh well…

Harley suddenly had a serious problem to solve.

Never mind what the serious Japanese and European weaponry was able to deliver in terms of performance – and quite often at a cheaper price. 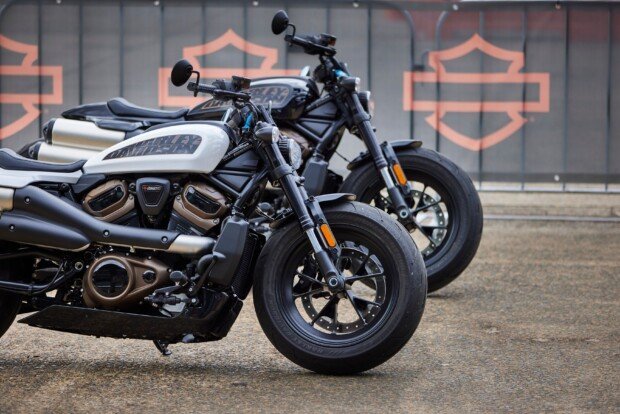 Clearly, a whole new motorcycling platform had to come out of Milwaukee. And that platform better be adaptable to bikes that still spoke to the traditional customer base, as well as attracting customers who’d never even considered buying a Harley.

The first cab off that rank was the Pan America – a Harley unlike any Harley ever built. A bike aimed squarely at the huge Adventure segment. A bike that totally ignored Harley’s traditional and ageing demographic. And in creating the Pan America, Harley had built the best-handling and performing bike it had ever made. You may read my reviews HERE and HERE.

In very short order, that superb powerplant, dubbed the Revolution Max 1250, found itself dubbed the T iteration and powering another all-new Harley, the Sportster S. 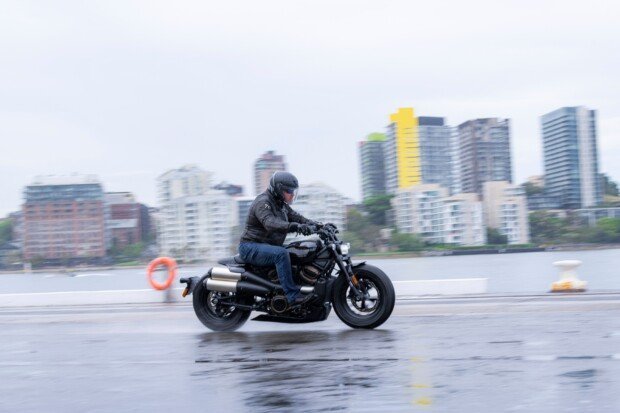 It was a liquid environment for most of the launch.

But this was more like it from Milwaukee. This spoke directly to its current demographic, albeit in terms of performance it is way to hell and gone more bike than the old folks could ever imagine.

Press launches being what they are, I didn’t get a lot of meaningful time on the Sportster S. It spent most of its time in third gear. And while I did put it in Sport mode for a while, the rain precluded me applying myself with a will. That will, of course, change when Harley hands one over to me so I can see how it does The Mother.

I predict it will be a hoot. 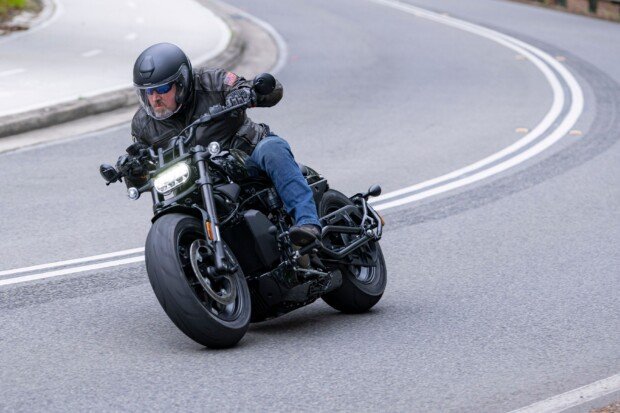 The thing bangs. That 60-degree V-twin engine is a gem. It’s essentially the same donk as in the Pan America, but tuned a little differently, so it’s making peak torque some 700rpm earlier in the rev-range. It has a higher compression ratio (13:1), and it’s equipped with different camshaft profiles, velocity stacks, and combustion chambers. The airbox volume is also larger. 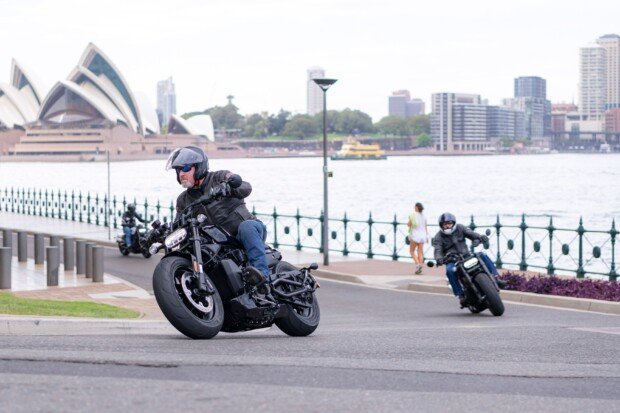 Probably the only time I’ve ever led Kevin Magee into a corner.

All new territory for Milwaukee. But it’s nailed it. The engine rocks and the package delivers.

The eight friction-plate clutch has a slipper function, and attention has been paid to lightening and strengthening components throughout the drivetrain. It shifts clean and smooth, something Harley has never quite managed until now. The 1250cc banger redlines at 9500, makes 121 horses and 122Nm of torque, and it weighs 227kg.

So them’s the numbers. There are also three ride modes, plus two customisable ones, Bluetooth navigation, music, and you can pair your phone to it if you’re one of those weirdos who takes calls while he’s riding. And the TFT screen is easy to see, and the menus are easy to navigate.

The tank holds 14.5-litres, and I got the impression it seemed a bit thirsty. Let me do some miles and I’ll let you know. 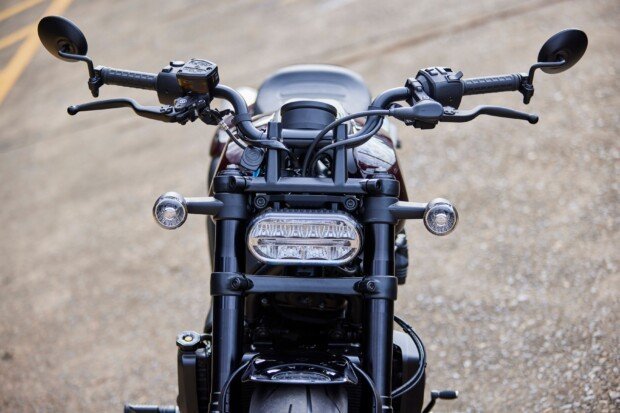 Great bar-ends and a headlight that seems to have some punch.

Ergonomically, it’s not bad. There are echoes of the VROD here. The seat is firm, but I’m not sure it’s an all-day thing. I found it roomy enough, and while the adjustable suspension is firm and way better than anything that came before it, your spine is still going to cop a pounding from time to time. There is a mid-mounted foot-peg option, but I did not try that.

I got the impression there was a battle between the styling department and the engineering department. I feel it resulted in a tie. There are aspects of the bike which I loved – that whole clenched, tough-as stance it has, aided and abetted by that fat 17-inch front wheel (there’s a 16 on the back) tells you it’s not going to love corners, but in reality, it’s pretty good. 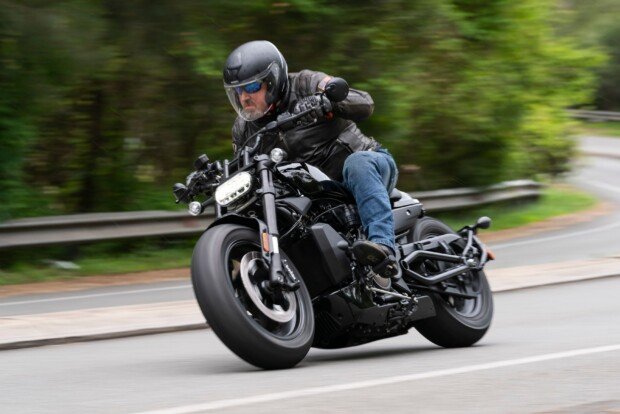 I can’t help wondering how cool it would be with a 19-incher on the front.

Ground clearance will be an issue in spirited engagements, and I had no trouble gouging furrows in the road with the hero-knobs. It’s not precise in corners, but if you insist – and you should insist – it’ll comply without wallowing murder in its heart.

I thought the side-stand too short, and the seeming lack of rear-guard did nothing but hose water at my back, including the back of my head when it rained. My feet also slipped off the pegs in the rain. And there was one moment there, when the whole ship whipped gracefully sideways as we rode down Victoria Road’s greasy bus lane, and Death smiled at me. But the Sportster collected itself, straightened up, and we continued. I’m thinking it was a patch of oil, rather than any bike issue.

Those high-set pipes do give off some heat. It is what it is. And while Harley has tried very hard to insulate them from the rider, their location is gonna warm your right leg in traffic. 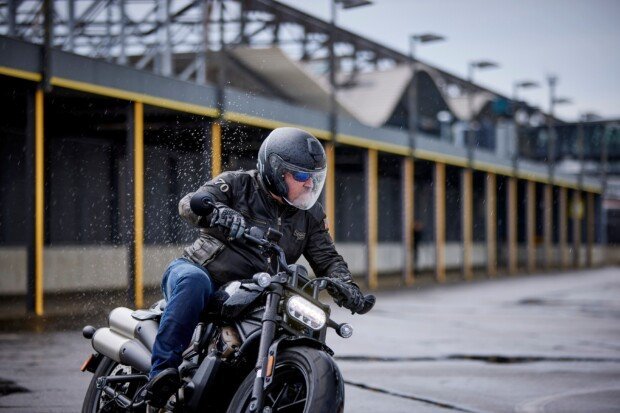 You can see how much water is being sprayed up from the back wheel. There is a guard-extension you can buy, but it looks kinda yuck, so I’ll put up with this. Wet is wet, pilgrims. Rain does that.

There’s only a single disc on the front – another styling call. But it’s a twin-piston Brembo, so it’s no slouch. Does it need twin-discs on the front? I don’t know. I didn’t ride it hard enough to make that call. The back-brake was fine, with lots of feel.

The bar-end mirrors were excellent, and the overall finish was very high. It did look a bit bitsy in places, but I think that just added to its neo-staunch look.

I liked it very much. It spoke to the darkness in me that still pines for the days when outlaws rode Harleys. I would love to hear a properly piped version. That said, it sounded heaps better and meatier than the Pan America. 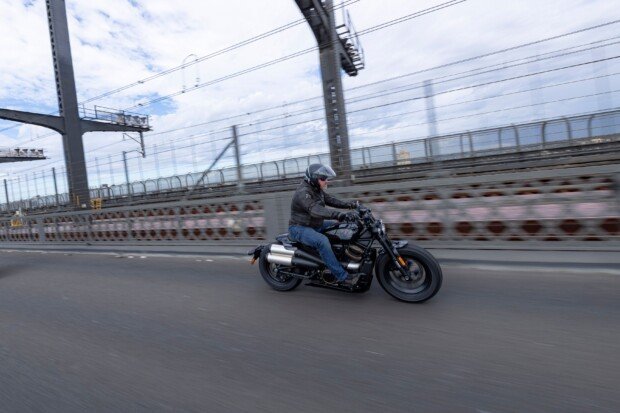 I do very much look forward to spending some quality time on it when it arrives at my house. Our first date is gonna be a pearler. This speed-dating press-launch stuff is like a tasting platter. It whets the appetite but doesn’t satisfy it.

The Sportster is cool again and I demand satisfaction.