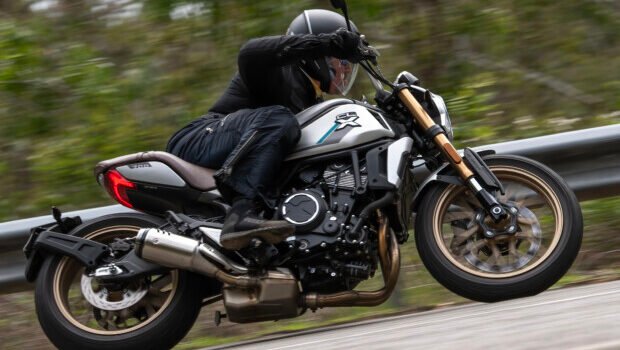 IMAGES BY NICK ‘THE DRAGON’ EDARDS 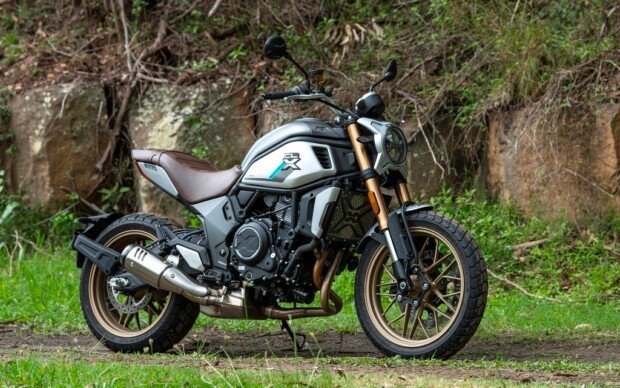 She’s not the prettiest girl at the dance…but she will dance with you.

Hand on my heart, I have struggled with so-called “budget-priced” bikes. I have always opened my veins and stood ready to sell organs to acquire what my heart demanded I get.

I mean, how good can a sub-10K bike be? Would it tick any of my highfalutin’ boxes? Would people sneer at me for riding such a bike? Would I be considered a povo gronk, and would my dedication to motorcycling be questioned astride something like the CL-X?

Most importantly, would I enjoy riding it so much the previous questions would become irrelevant? 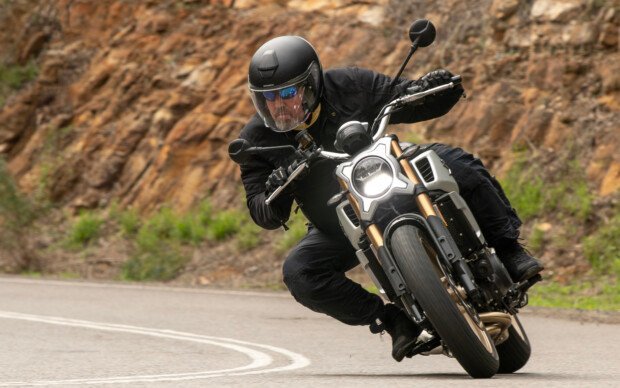 Low-beam was OK…high-beam could be heaps better. But can you see the X thing going on?

As you probably know, there are two budget-building bike companies selling their wares into Australia. One is the Indian-made Royal Enfield, and the second is the Chinese-made CFMoto – which, incidentally stands for “Chunfeng” which is “Gentle Breeze”.

The Indians rely almost exclusively on retro styling to sell their bikes – an understandable attempt to hark back to an era when Royal Enfield was a major British marque, rather than a mass-produced Indian concern. 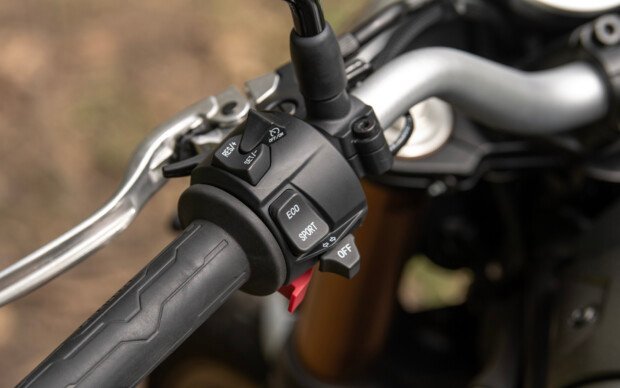 Basic, but there is a cruise control.

The Chinese bikes do not have a heritage like that (as misplaced as it may be) to rely on. So their cheap and hopefully cheerful motorcycles must actually bring some true motorcycle credentials to the table.

Both marques are, of course, up against the technological mastery, reliability, and build quality of the Japanese – who are also pitching their smaller and simpler models at very competitive prices. 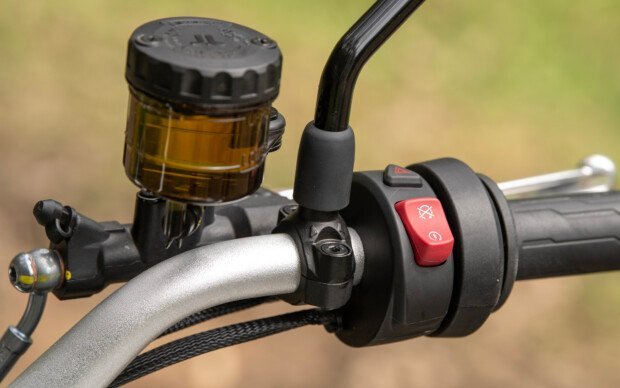 Bet it’s been a while since you saw such an uncrowded a right-hand switchblock.

But not sub-$10,000 competitive. And if you’re not in a financial position (ie. Able to claw that extra few grand outta your girlfriend/mum/grannie, or rob a servo) to get a Yamaha, but the need to ride is keeping you up at night, then this is where you’ll be shopping, I guess.

I’m rather “meh” about the whole Royal Enfield heritage schtick, because style doesn’t work over substance in my world, but my curiosity was certainly piqued with CFMoto.

Especially since it debuted its first non-LAM, which is the CL-X Heritage I got to ride for a few weeks. 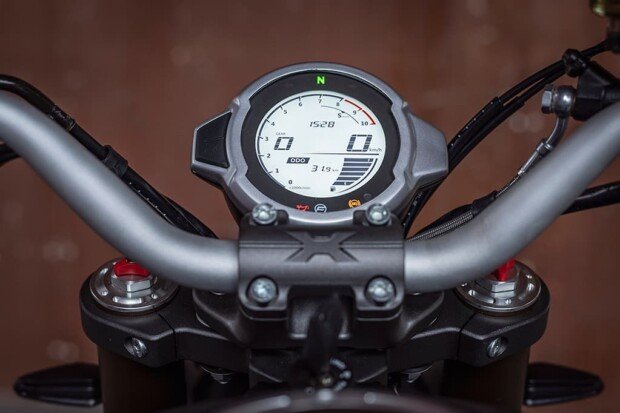 I had also seen CFMoto’s stunning concept bike, the SR Vision, online, and it opened my eyes. If that thing ever becomes real, it may well be a game-changer for the industry.

If they ever build this…

So I figured CFMoto had serious designs on making an impression on the motorcycle world. How serious? Well, if the CL-X Heritage is anything to go by, rather serious.

It was both what I expected and not what I expected in a sub-10K bike. I know I keep mentioning the price-tag, but that is the bike’s prime selling point – and I’m happy to tell you that it’s certainly bang for your buck in that regard.

In terms of what I’d expected? Well, the seat is not something you’d spend all day in – and you sit in it rather an on it, ala the Ducati Diavel, but without the comfort. 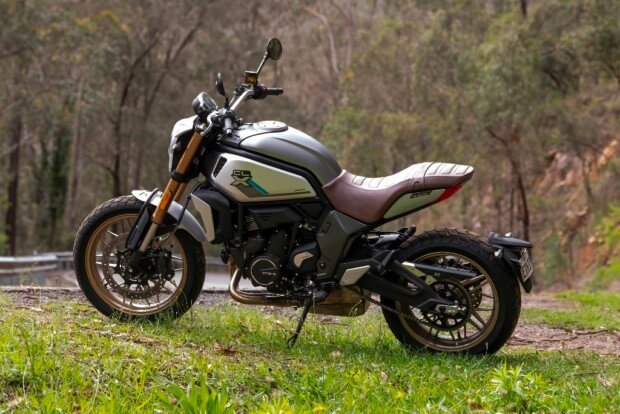 It’s ergonomically neutral otherwise – with wide handlebars and not-too-high pegs. And it revs like a sonofabitch. So you’ll find it certainly picks up its skirts when you crack the throttle, but it won’t take your breath away. Some 73 eager horsies are there at 8500 rpm, with 68Nm of oomph peaking at 6500rpm. So low and mid-range is not disappointing. Buyers of this bike will have no interest in top-ends. But it redlines at 8000rpm, so I have no idea what that’s about. 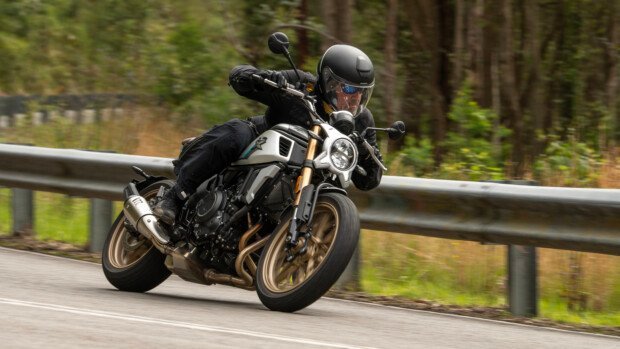 Nothing very bad going on here…except me. I’m bad.

And all this eagerness sounds…well, kinda too eager and a bit tinny, I guess. It buzzes angrily, for sure, and a can might help that out. You’ll certainly have money left over after buying the bike.

There are two engine modes. Sport and the other one. Sport is a bit snatchy, but the other one is virtually a default wet setting. It’s gentler than a Sunday morning pork bun at your favourite yum cha joint.

The flat-track-style tyres hang on well enough, and the bike feels far more sure-footed than I thought it would be. The suspension is adjustable, and it probably might need some of that, because on its stock settings, it was…well, what I expected it to be. Which is adequate, but not life-affirming.

Smaller riders might have a different view, but since I’m the size of a bear, I have bear-sized demands. And I know what good suspension is. 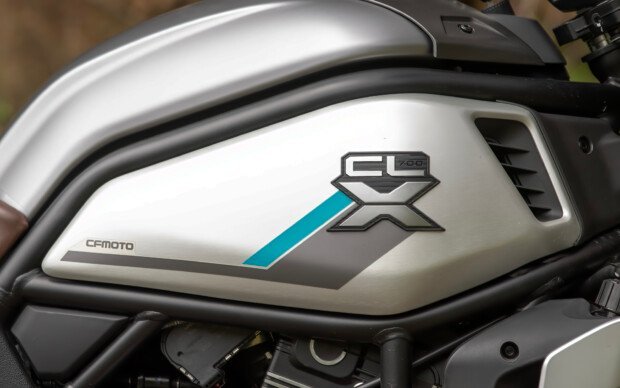 The finish was also better than I thought it would be. I wondered how they did it for the price, despite understanding Chinese production techniques. It’s not bad at all. Switch gear is OK, if a bit numb-feeling – especially the indicator switch (they are self-cancelling, by the way). And I was ambivalent about the LCD dash. It’s also entirely adequate, and I kept telling myself this is a sub 10K bike and I should stop pretending it wasn’t.

That’s it’s cleverness – it does fool you from time to time. It offers you something you’d expect on a more expensive bike, and then brings you down to earth in some other area. 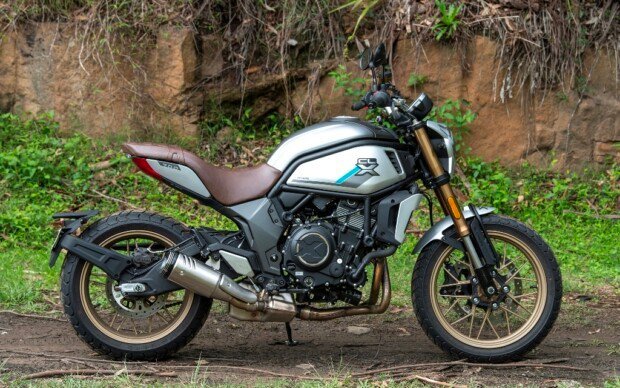 The brown seat wounds it. And you’re gonna struggle to tie anything to its pillion section. A tail-tidy may help aesthetics.

Stylistically, it’s certainly unique. The X theme is evident from the headlight to the taillight. But to my eye, it looks a touch mishappen, and unsure of what it wants to be. I forgive this, because I’m thinking the Chinese will evolve the CFMoto aesthetics very quickly in the years to come. Once they figure out what we want, they will give it to us – and once again, I entreat you to Google the SR Vision.

But I can only review what is now, not what is to maybe come along in the future, right? And right now, it’s not going to win any beauty contests.

The petrol tank holds 13-litres – enough to get you 200km if you’re nannying around. Ride it hard and you better start searching for fuel at about 170. So it’s pretty much aimed at an urban environment, I’m thinking, especially considering that mean old seat, and the somewhat underdone pre-load. 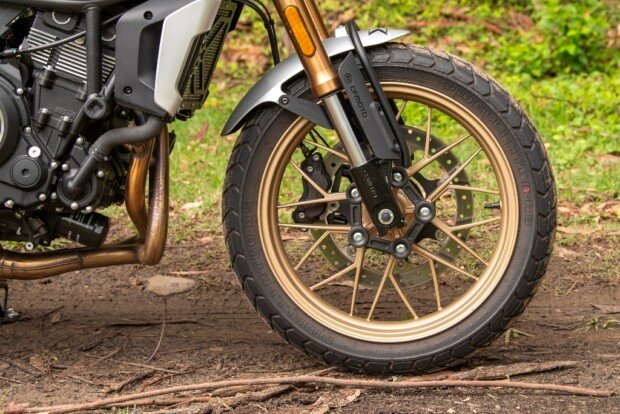 I felt the golden wheels were quite tasty.

There’s a single big disc, a radial-mounted J.Juan jobbie (no, I have never heard of it either) grabbing a 320mm rotor, which didn’t offer anything worth gushing about – and might have been better being paired with another such unit on the other side of the upside-down KYB forks. It is certainly adequate, and hard-chargers wouldn’t be shopping here anyway. The rear one did what you’d expect rear-brakes to do if you’re my age, which is to vaguely help matters along rather than be an equal partner. 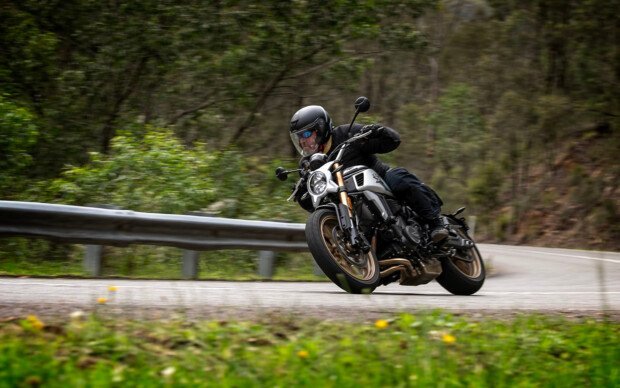 It’s better at this than it has any right to be for the money.

The chassis was also an adequate and entirely appropriate thing for a mild-mannered, mid-sized, upright twin. It holds a line, allows non-terrifying changes to that line if needed, and doesn’t get twisted out of shape too badly by mid-corner bumps. Just don’t over-estimate the bike’s or your own capabilities in this regard. You can find the limit on it if you’re on your game.

So were my big questions answered? Let’s see… 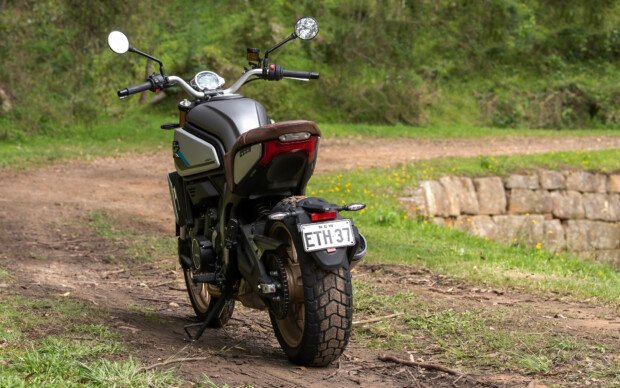 The ‘X’ Theme is continued at the tail-light.

Would it tick any of my highfalutin’ boxes?

One or two, but not the other ten.

Would people sneer at me for riding such a bike?

Yes, but I have not cared what people thought of me for a long time. 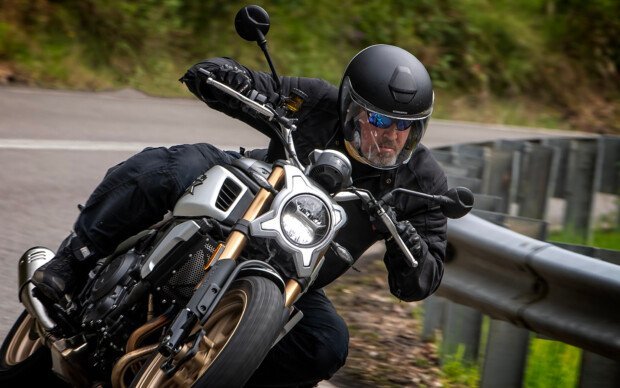 Here is me caring. About things.

Would I be considered a povo gronk?

Possibly. But I’ve shamed many high-end bike owners on a much cheaper bike. I know it’s not what you ride, but how you ride it. Think of the laughs if you see off a Ducati rider on your cheerful wee Chinese bike.

Would my dedication to motorcycling be questioned astride something like the CL-X?

Would I enjoy riding it so much the previous questions would become irrelevant?

Just know this, as I know this. The Chinese are coming for your motorcycling heart. And their efforts to grab it will get better and better. Be in no doubt about that.

We certainly do live in interesting times…

You may examine all the CFMoto offerings here…