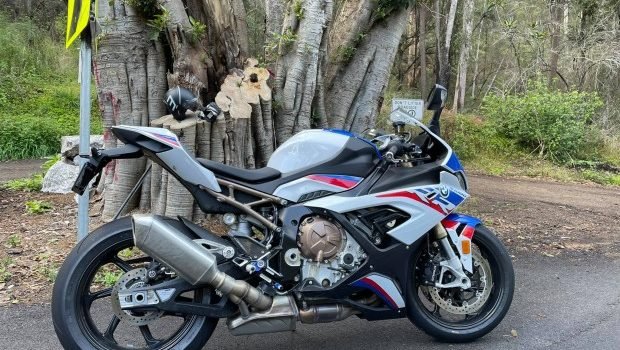 Please forgive the quality of the imaging. Due to everyone and everything being locked in their cupboards, I was not able to avail myself of Nick Edards’ photographic mastery. So my neighbour, Nick Warne, stepped up and did some of the riding snaps. I did the others. It is what it is. If you need better pics of me riding it so your missus can pleasure herself, you’re outta luck. As is she. 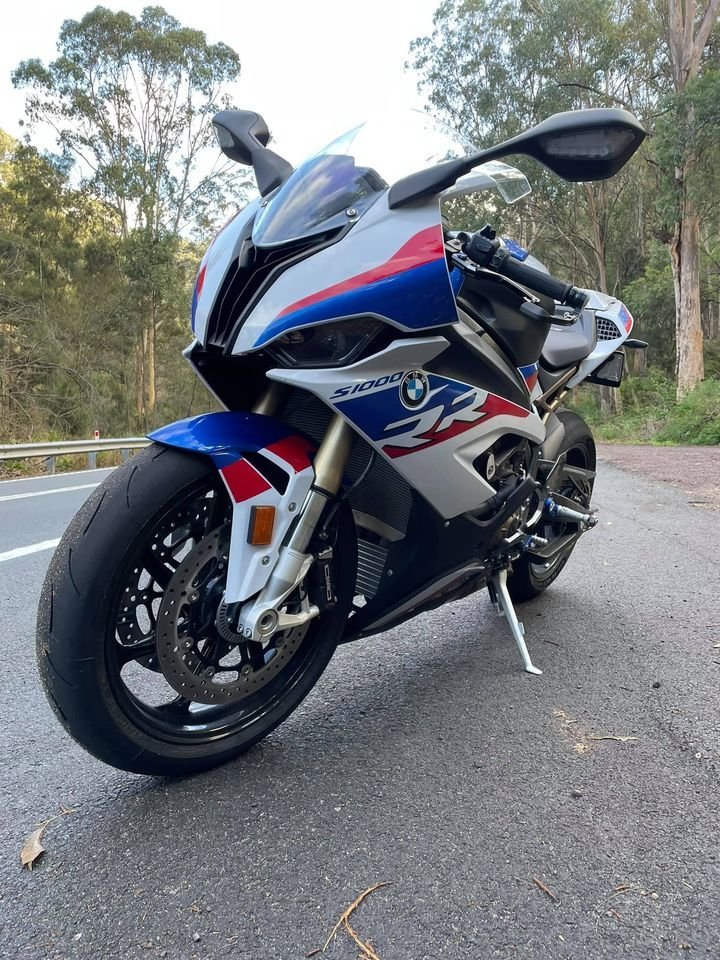 The point of the spear is very pointy.

I’m not sure what I can tell you about the M Sport you haven’t already guessed.

What is that even? I have no idea. I certainly did not rev it that hard. What do you think I am? Glenn Allerton? Stupid? Drunk? 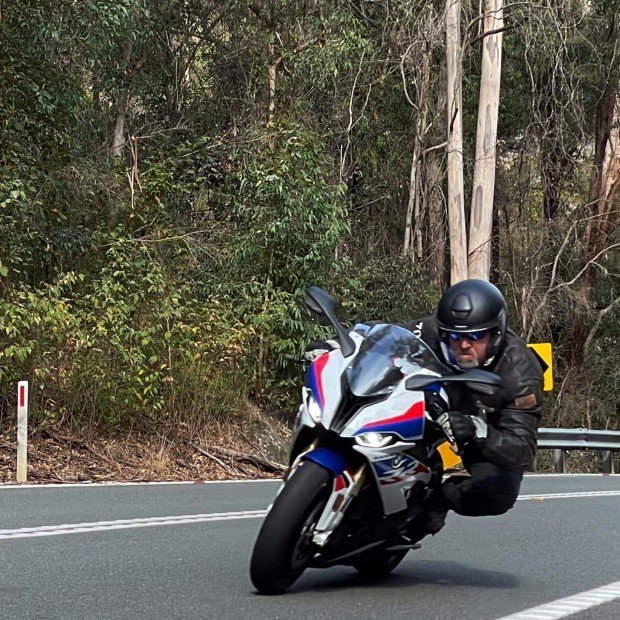 Here is what I do have an idea about. Ten years after BMW decided it was going to make superbikes, and allowed me to wobble around Phillip Island on the first S1000RR, a lot of water has flowed under that bridge.

Many and obvious have been the improvements wrought on the S1000RR. Not the least of which has been a quantum leap in styling. The first one looked a bit like wonk-eyed exercise in angry German race-bikery. This one is an aesthetic masterpiece of bike-design. 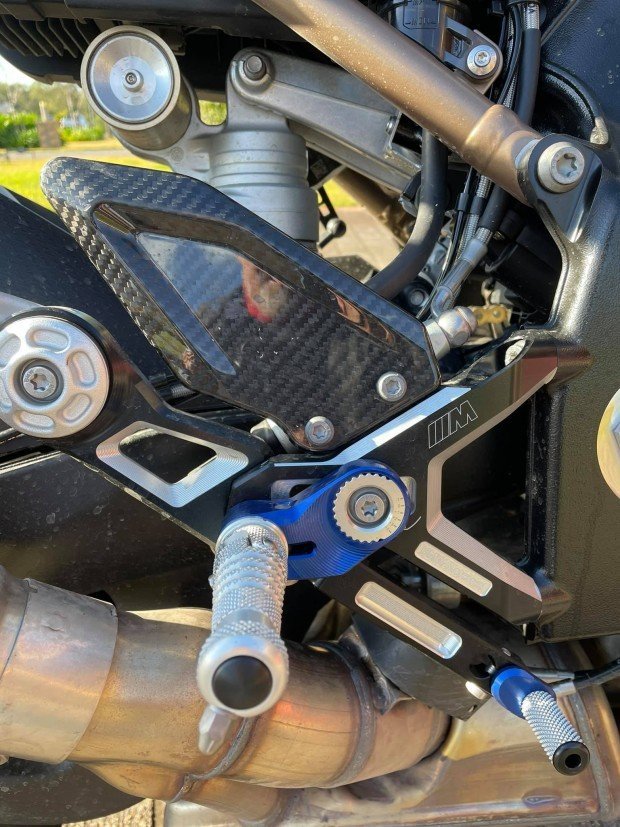 But there’s also much more to the new S1000RR than just the way it looks – and it looks like it shoots lasers and photon cannons as it’s carving racetracks and acquiring podiums. It’s lighter, more powerful, and as sophisticated as only German super-computers can make it.

Which is to say it is far, far more sophisticated than me. And you. And almost everyone you ride with. And that is what makes the S1000RR very special. And the M Sport variant, which is what I had for almost two months – a touch more special. It comes with tyre pressure monitoring, a gorgeous embroidered M seat, a special M battery, the Riding Mode Pro option in its guts, and stunning, brilliant, must-have carbon wheels. And until you’ve ridden on lightweight wheels (unsprung weight is a big thing), you don’t know what you’re missing.

This is the point of the spear. The sharp bit. The bit that glints in the sun. The bit that enters first and thus ends the argument. 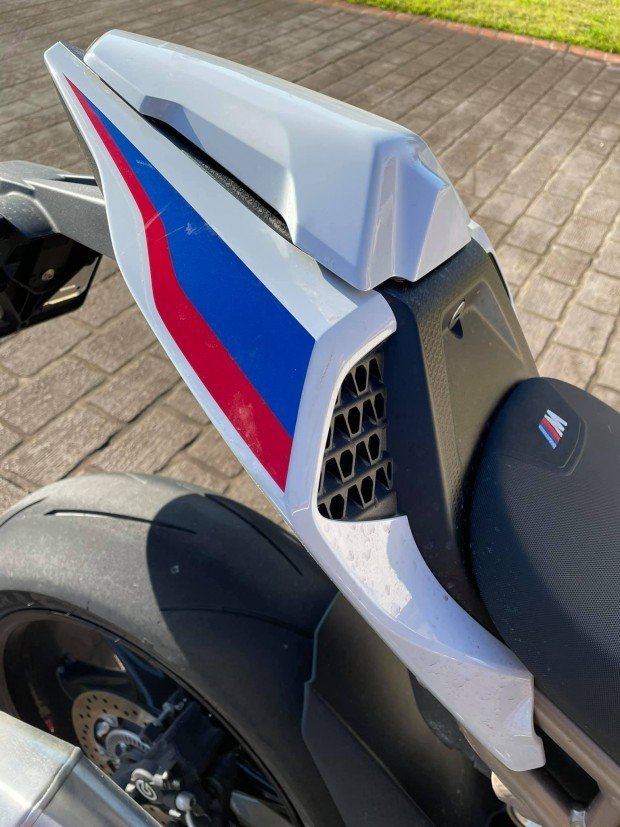 No, no pillions. Go cry your disappointment elsewhere.

The M Sport is, of course, track-ready. I, of course, am not. It is fair to say a slim-hipped 25-year-old with sponsorship on his immaculately-fitted leathers would relish appearing at race-meeting or a ride day and firing the M Sport up to the applause and admiration of everyone there.

Me? Well, it would please me no end to smash a few hundred kays of wicked corners out, lever it onto its side-stand outside some distant pub, buy a cold beer, take a seat, and look at the sun shining on its superlatively wicked lines. 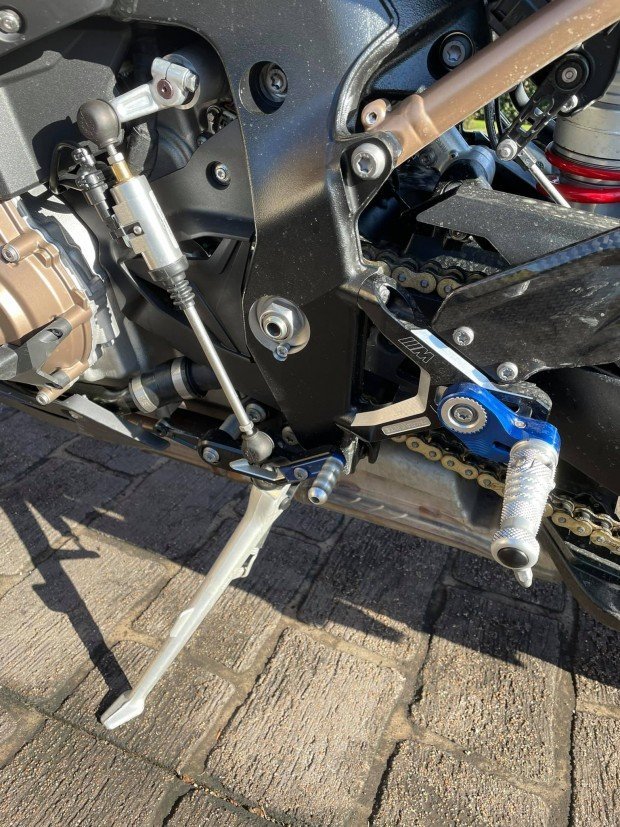 One of the best quick-shifters in the business. Yes, up and down. Aber naturlich.

So I did some of that. I communed deeply with the pointy end of the spear.

It was mesmerising to ride. Even if you lack the necessary skills and are shaped like a bear, you’re still going to be fast. You’re still going to carry appalling corner speed. You’ll still stop breathing when braking hard and praying harder. And then you’ll take a deep, ragged breath as it hooks up coming out of that corner you swore you were entering too fast, and you’ll power on to the next. And the next. And so on. 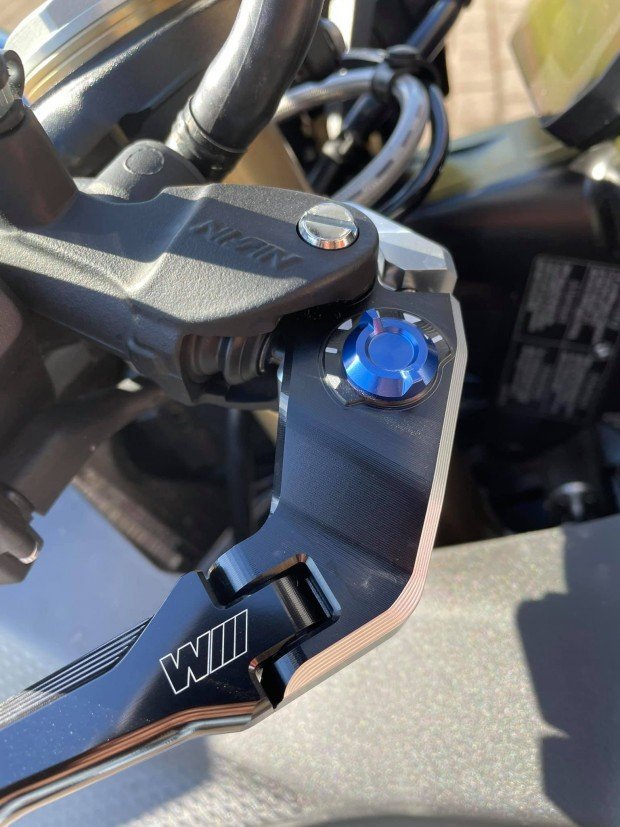 Bursting with high-end touches of bling.

Like the Panigale it contends with, the BMW is not as ergonomically challenging as I imagined it to be. It’s very reasonable in that regard. There are racing crouches and racing crouches.

But each time I rode it, I wondered how I was going to review it for you. It’s faultless. It does nothing wrong. It does everything superbly.

Want me to whinge about how it’s not the best lane-splitting commuter, or a challenging touring bike? Seriously? 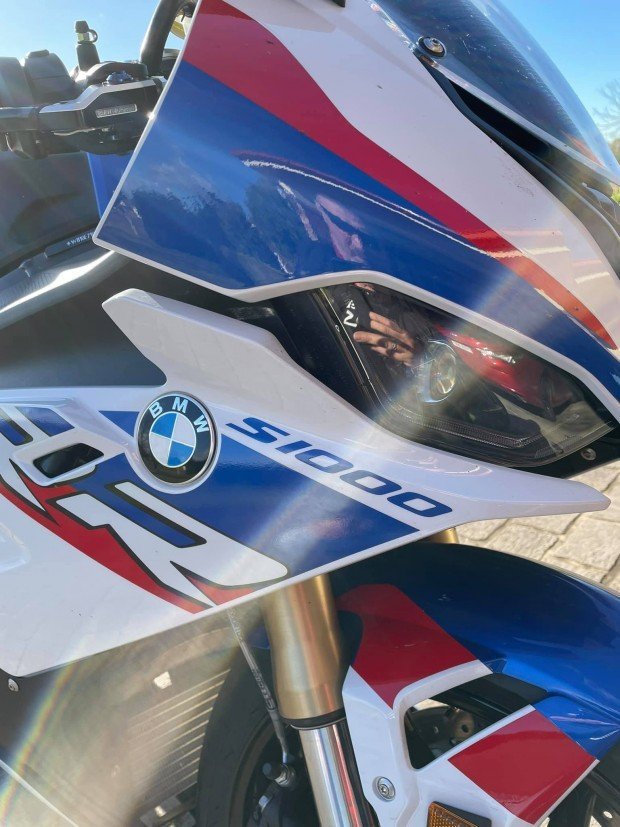 Why…yes, they are the colours of the Serbian flag…

You ride it like you know what you’re doing, even if you don’t. Is it overwhelming? Not at all. It’s far too sophisticated and refined to overwhelm you. It just provides all that is needed, when it is needed, and very much how it is needed. 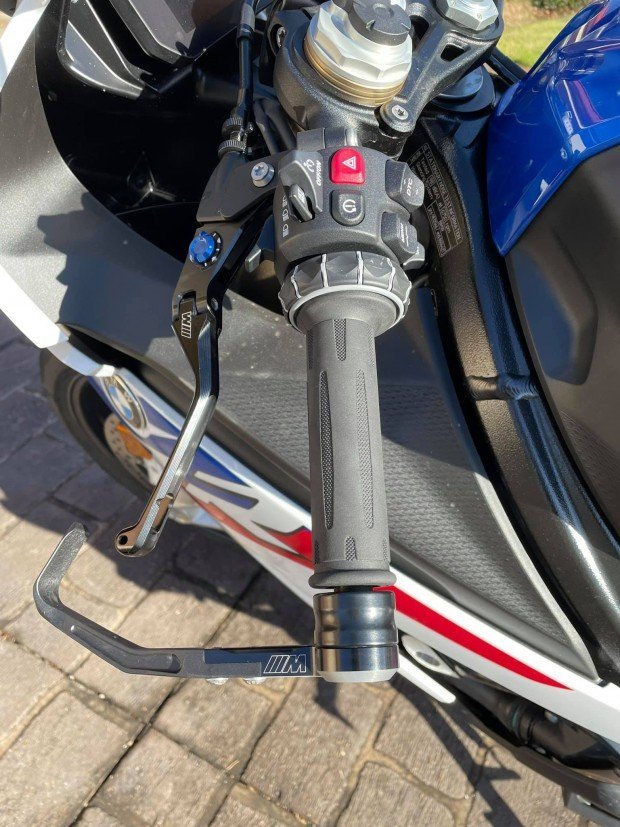 The familiar spinning wheel of technology.

Unlike the Panigale, which is hell-frying your legs while pumping you with adrenalin until you’re howling like a red-eyed wolf, the S1000RR is stroking your bristles and saying: “Ja, ja, junge…alles ist gut…”, like it’s almost coddling you to go faster, try harder, brake later…well, you get the drift.

Glass smooth, intuitively responsive, and shatteringly fast – this is about as developed an in-line four as I have ever beheld, or had the pleasure to ride. Nick kept saying “state of the art” after he rode it – which is rather accurate. 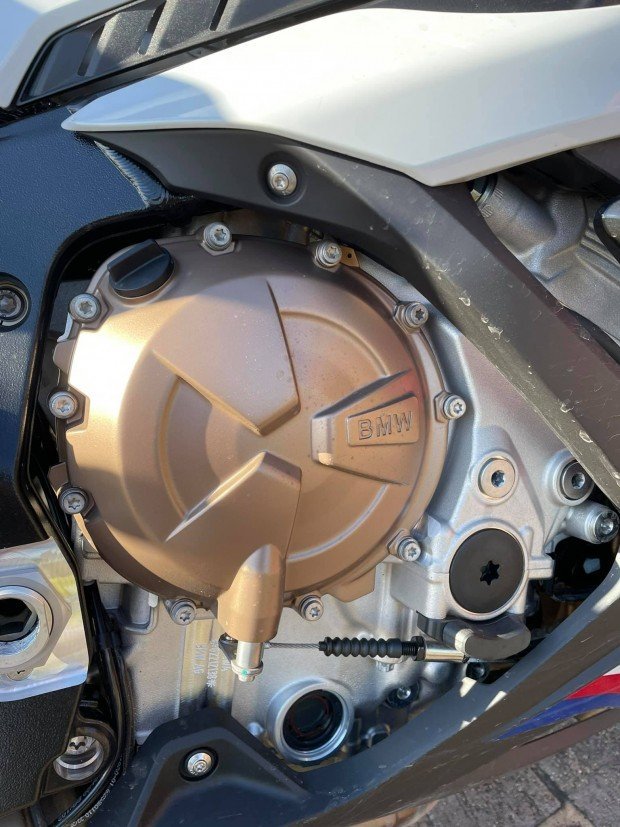 Magnesium…or Kryptonite. Does it matter?

It certainly is that. And that makes it so much more than the sum of its parts, as well. It is both a statement and a testament to BMW’s ability to build a world-conquering superbike.

Because that is exactly what the S1000RR M Sport is. 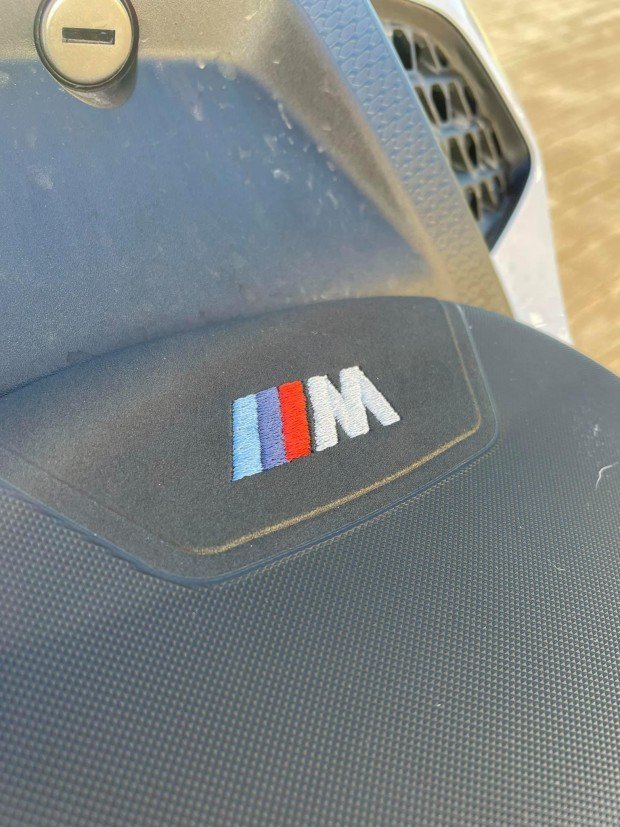 I entreat you to go ride one and tell me I’m wrong. Put aside, if you can, considerations about money and practicality. Those terms have no place in any true and honest discussion about bikes. The heart wants what the heart wants. The brain can shut up and mind its own business.

Especially when it comes to the Point of the Spear. 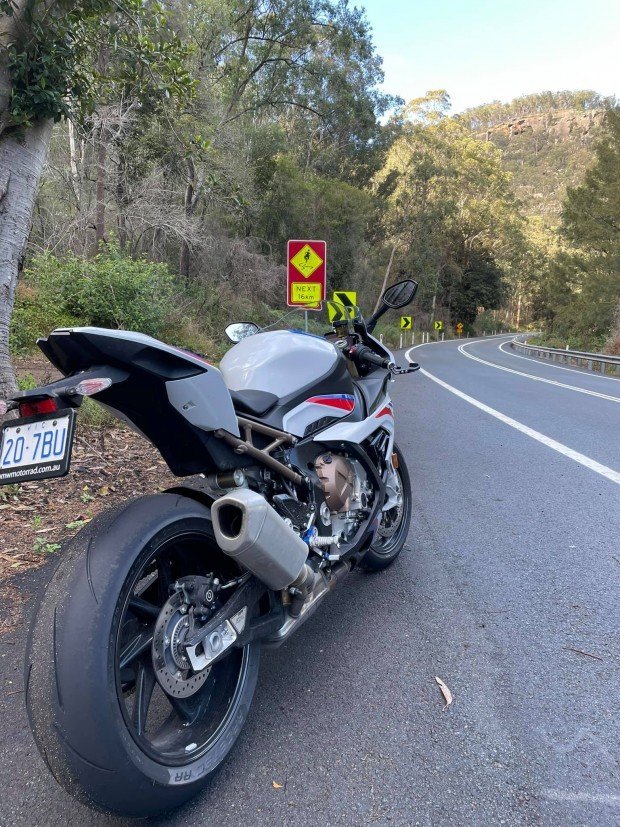 Boris had asked me if I would be free on Wednesday to help him move two motorbikes to where they could be photographed.  I had agreed.  Who wouldn’t?

Sadly, when Wednesday came around, Nick Edards, Boris’ usual photographer was indisposed.  We decided we would go for a ride anyway.  Perhaps we could at least get some static shots using Boris’ new iPhone 12.

Boris had just taken delivery of the new Hayabusa, while he had already put some kilometers under the wheels of the S1000RR M Sport (hereinafter the M, because life is short).  So, outside of photography, riding the M fell to Yrs Trly.  Sometimes life IS a box of chocolates.

I expected it to be uncomfortable, peaky, and nervous.  It wasn’t.  Instead it brought me up to date on the state of the motorcycling art, 2021.  It was smooth, tractable, forgiving and easy to ride.  I am not one to anthropomorphise, but this machine was like a German racing instructor.  Not one of those für dich ist der krieg vorbei (for you the war is over) types, more like an intense version of Stefan Bradl’s dad.

I could feel it helping me through the bends:

Sadly, it will take more than imaginary friends for me to get the most out of the M.  Its capacity is so far beyond my capability, I feel like a musketeer with a machine gun.

Nevertheless, the M is not beyond me.  Herr Bradl will always be there patiently to explain how much faster I could be going if I could only adjust my sense of the possible.  I envy those who can afford to travel down that road.  They will get faster and faster, and laugh uncontrollably inside their helmets as they come to understand what the state of the art can do for them.