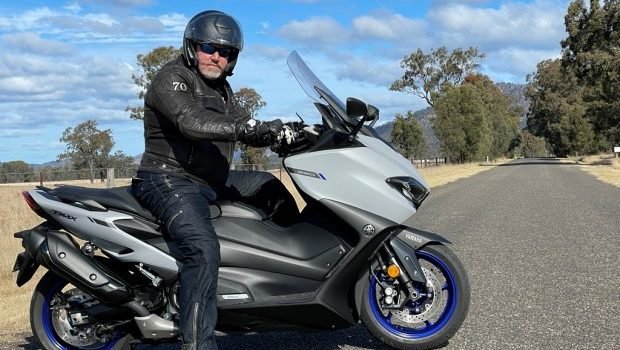 Let me once again apologise for the quality of the images, but Plague lockdown prevents Nick Edards from wielding his magic, and I do what I can do. In this case, my mate Henry Warne did the snappery deeds. 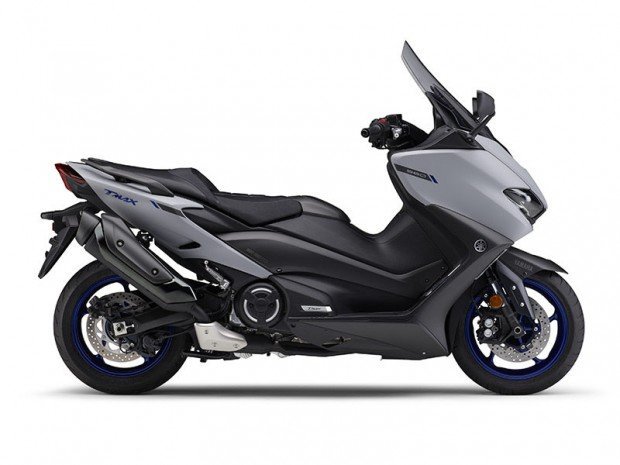 No, you can’t ride with your knees together. It’s not THAT kinda scooter.

Look, I know some of you big tough blokes are gonna click off this yarn because you saw the world “Scooter”, and instantly felt your manhood threatened.

You’re not even gonna read it in case your massive hog-leg shrivels, inverts, and becomes a uterus. Or something. 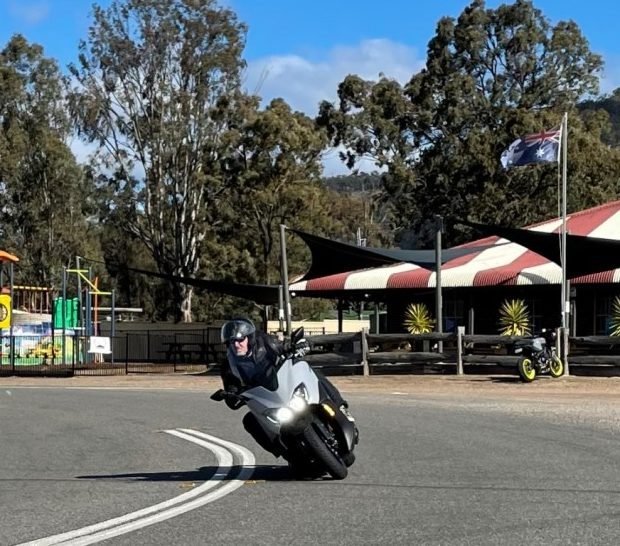 If only there was an audience…but the Plague has taken that from us as well.

I get it. I was once like that too. The outlaw colours on my back made it like that. My world was narrow. My view on motorcycles primitive and retard-simple. It could be summed up as: “If’n you ain’t ridin’ a Harley, then you’re just riding shit.”

And I promulgated and lived this, even as I loaded my Harley onto the back a hundred different utes, or was passed on the road by pretty much everything with two (and often four) wheels. 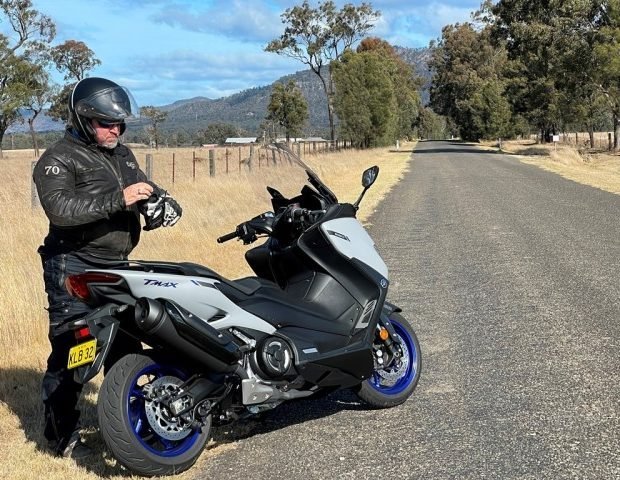 “Maybe I should have put the right one on first…”

My world-view changed as I got older, and in my 45-year-long riding career, I have been privileged to ride a lot of different motorcycles. And scooters. So I know some stuff about some things.

So here’s what I know about the TMAX. And I don’t care if you’re currently slaying the world’s corners on a Panigale, or soaring with Freedom Eagles on a Harley, the TMAX is hands-down one of the most comfortable, able, easy, and inherently hilarious two-wheelers you will ever ride.

I could get on it right now and ride to Darwin in perfect comfort at 150km/h all day. I could take it to Mother Putty’s Ten-Mile and shame 90 per cent of the weekend warriors wobbling about on its bitumen cruelty. The other 10 per cent? I couldn’t shame that lot on a MotoGP bike. They just ride faster than me. Way it is. 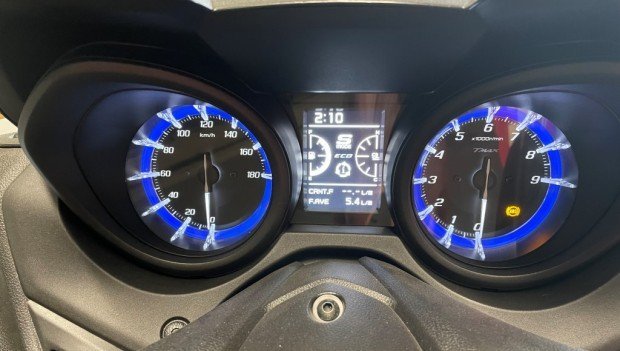 So have no doubts about the TMAX’s ability. As a true sales phenomenon (there have been more than 250,000 of them sold), Yamaha has spared no expense in terms of Research and Development making the TMAX rather amazing.

Australia, being the strange cultural backwater that it is, and blessed by vast distances, scooters have always been considered somewhat pointless, and…erm, less manly, I suppose. 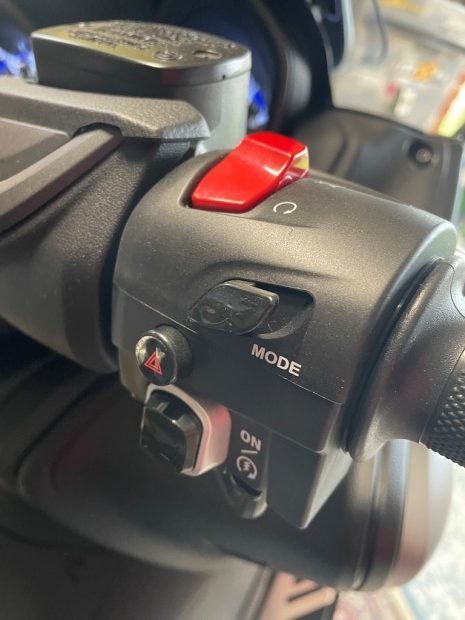 The ease with which these fall to hand is like a blessing from God.

And while I can agree it’s hard work touring on a normal 300cc (or smaller) scooter, they make a lot of sense in our congested urban environments – as all motorcycles do. So why pick a scooter over a normal bike? 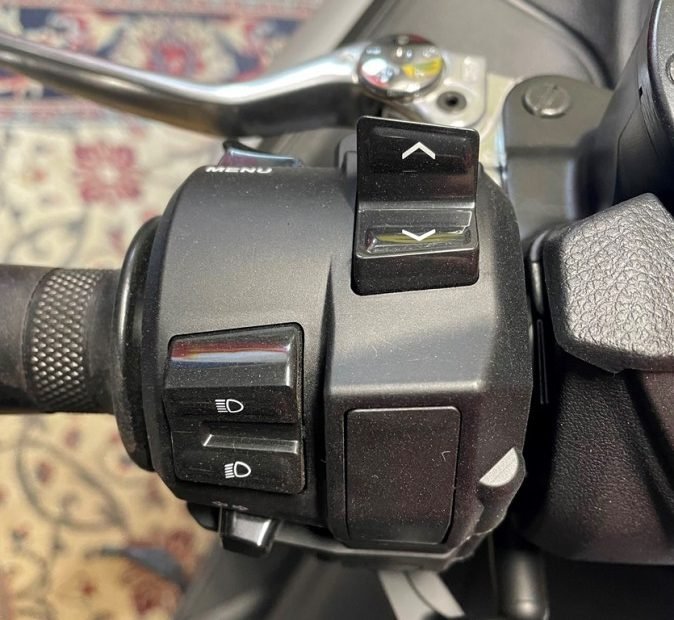 High-beam, low-beam, and an electric screen. Your life is complete.

Ease of operation is the answer. No clutch and a seamless automatic gearbox, mated to something that steers feather-light, fits into tiny gaps in traffic, can hold two helmets (or a small cooking-pig and a case of beer) under the seat, will seemingly do 100000km on a cup of fuel, and is the last word in seating comfort, is what modern scooters are all about.

Now put some brilliant suspension on one, give it some killer brakes, and shove in a feral 560cc engine. It changes everything. Sure, you can bumble around town and all – but you can now also seriously tour and scratch on it if you’re minded to get out of the big smoke. 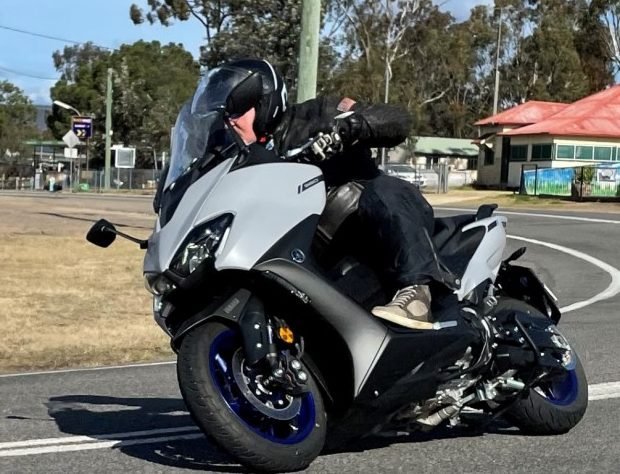 It’s actually a bit of a head-fuck.

The hardest bit is getting over the “It’s just not a manly thing” noises your man-brain makes each time you even look at a scooter, right? 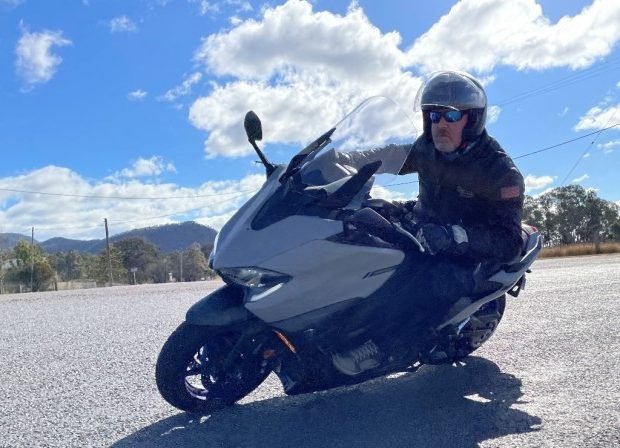 Once you realise there is no engine-braking, you’ll be fine.

If you’ve seen that brilliant series, Gomorrah, which is one of the best Mafia dramas ever made, you’ll see scooters like the TMAX in a very different light.

Gomorrah tells the story of the Camorra, the Neapolitan Mafia, which conducts all of its dark business, like assassinations and drive-by shootings, on TMAXs. No clutch, no gears, and a two-wheeler that goes like all the stink on earth, is pretty damn good as a gun-platform when you think about it. You ever tried to fire a handgun from a normal bike? It’s bloody hard. You have to use the clutch and the throttle, and that’s both your hands. It’s hard to fire a handgun you’re holding in your mouth.Without a clutch getting in the way, you and the handgun are laughing.

No questioning of anyone’s manhood there. In fact, a pack of two-up scooters in Naples can send people scurrying off in terror, much like a pack of outlaws on Harleys once did in the USA and here.

“But this is not Europe,” you say. “If I was to ride a scooter, people would ask if I enjoyed the wind on my vagina. And my lower lip would tremble. And I would feel less than a man, and girls would scorn me! Ned Kelly would writhe in shame at my unmanliness! And…” 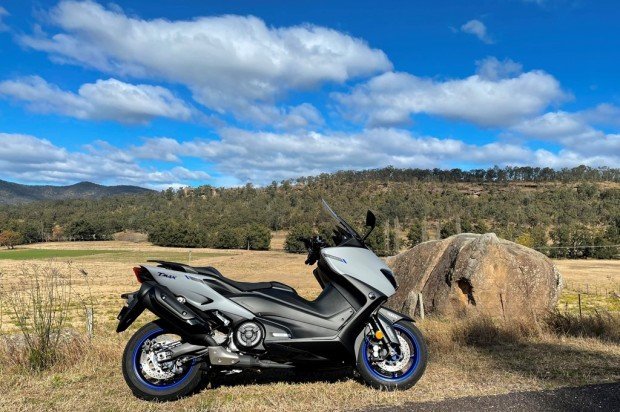 A man could put some bottles on that rock and use them for target-practice. Just sayin’…

Shut-up. Seriously. If your manhood is linked to what you ride, then it’s not really all that manhoody. How do I know this? Because in my stupid young head, my manhood was once linked to what I rode.

What happened to my manhood when I stopped riding outlaw Harleys and went back to riding every other bike on earth? Nothing. It remained intact. I had long ago ceased to care what people thought of me, or what I rode, or how I rode it. And I underwent a great emancipation.

You see, I was the very same bloke who once rocked outlaw colours, and who now rode Scooters. Or Panigales. Or Adventure bikes. Or Nikens. I relished them all for what they were, and what they offered me, the rider. What I rode had no bearing on what I was. 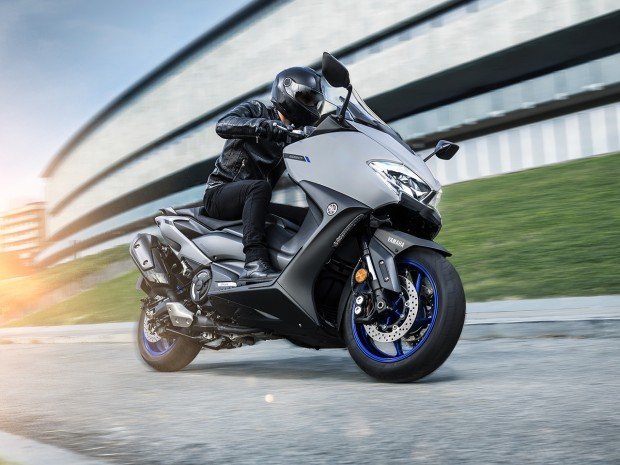 Yamaha takes much better pictures than me. Or Henry.

The TMAX delights me. How could it not? This year’s iteration is touch more powerful (3.5%), and a bit more torquey (6 %). The factory says it accelerates harder. And that may well be the case. It’s hard to notice these percentages unless you ride the models back to back. For what it’s worth, the TMAX has always accelerated like a sumbitch – and it continues to do so in 2021.

Its handling is the stuff of legend. The frame is a twin-spar aluminium jobby, the brakes are great, and the suspension is rather serious for a scooter – we’re talking 41mm upside-down forks up front with 120mm of travel, and a horizontally-mounted single-shock on the back. You can unsettle them, but you’ll be screaming in abject terror by that stage and realise you should have eased off a touch some time back.

Up until you ask it questions many normal bikes would struggle to answer, you’ll ride astonished and amazed at just how brilliant the TMAX is.

There are two places you can put your feet. You either cast them forward like a cruiser, or your put them under you like a normal bike. The option is yours. What you will find is that you’re going to be on tip-toe at the lights. The TMAX’s seat is wide (which is why it’s so comfortable), and it’s not a small vehicle. There is some robust size to the package.

But know this, when you come hairing into a corner, legs akimbo and elbows up, you cannot downshift. And you will open your mouth and say: “Where’s the engine-braking?” You must embrace this as a positive. If you’ve ever ridden a two-stroke, you’ll understand.

Your corner-entry speed is thus governed by the size of your balls. And if they are hefty, then that speed will be terrifying and satisfying in equal measure. You will hear scraping noises. Ignore them. Ground clearance is very good in almost every scenario except when you’re shaming people on bikes. Understand the TMAX is just shedding extra weight when it touches down in a corner. It tips the scales at some 217kg, so it’s no featherweight – but a dedicated paisan can bring that under 200 with a little imagination.

And there are tonnes of go-faster, handle-better goodies you can fit to the TMAX. They race in them Europe. Normally in-between Mafia hits and taking pretty girls in short skirts for an espresso, through those magical, narrow, medieval streets.

This year’s TMAX has keyless everything (ignition, compartment access), two engine modes, traction control, and quite a stunning TFT instrument array. It’s look has been redesigned, and while it’s always looked like the most aggressive of scooters, this has been sharpened even more. If it had a neck, there’d be a tattoo on it. 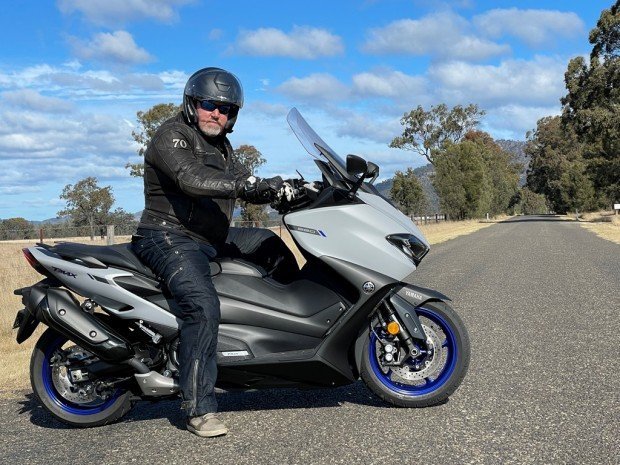 My manhood’s good. How’s yours?

The lights are good, the horn is eepy, the screen does a good job of keeping the wind off you – and it’s adjustable, if you’ve got a neck like a giraffe. The finish is superb. It’s a quality unit – and its price reflects this.

Look, I know it’s a scooter. And I know the mere thought of such a thing causes your allegedly manly vegetables to wither in disdain. Your disdain is misplaced. The TMAX is an exercise in weaponised hilarity. And while you may never be able to join an outlaw club on one, the Mafia will welcome you with open arms.

In terms of ease of operation, ability, integrity and superb comfort, it is peerless. In terms of being able to shame actual motorcycles, it’s priceless.

Oh, and one more thing. One more crucial, beautiful, wonderful thing. The TMAX is a Learner Approved Motorcycle.