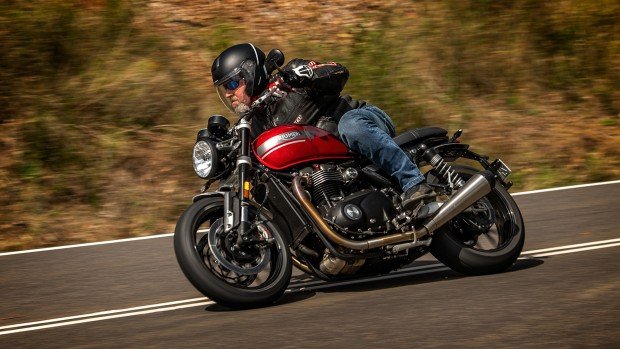 IMAGES BY NICK “I’M BEAUTIFUL AND BRITISH TOO” EDARDS 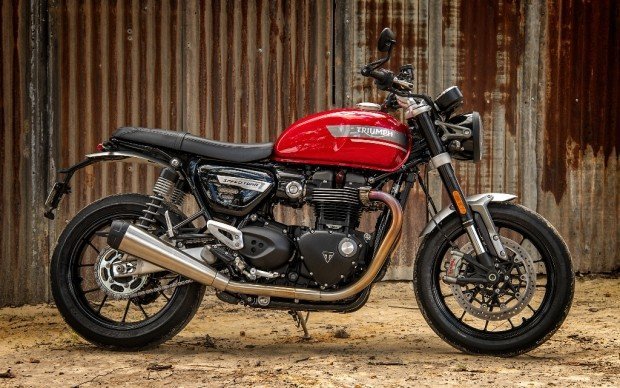 Beauty is invariably in the eye of the beholder. And some people – sad, soulless, pee-smelling lumpenproles to a man – seem to think what a bike looks like is not important.

Of course looks are important. It is, in fact, how a bike looks that is one of THE most important things to consider when buying one. You have to look upon your bike in adoration. You have to cast an admiring glance at it each time you walk away from it. Every time you squeeze past it in the garage, it makes you smile because it is pleasing to your eye. Sometimes, you drink beer and stare at it because it is so damn fine to look upon. 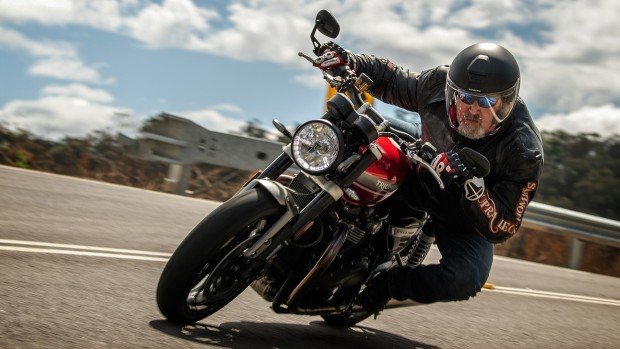 I fit on it very nicely. Most people will.

Such bike are rare. Objectively beautiful bikes do not appear every day. Hard and cruel marking without a hint of rose-tinted glass will reveal there have been maybe less than a dozen objectively stunning bikes ever made. 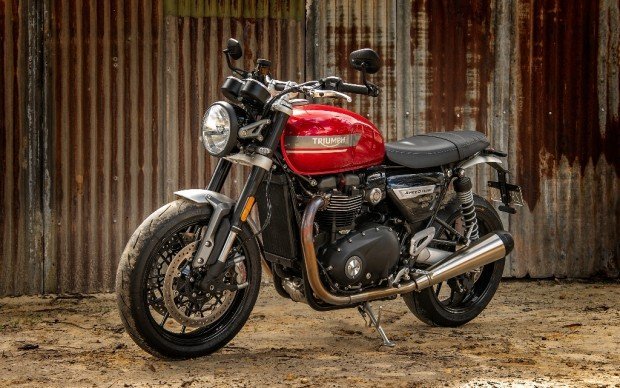 Some bikes have great front ends. Some great bums. Some look good only from a certain angle and crap from another. Some will only ever look acceptable covered in mud, bugs, and leaking oil.

And then there are bikes like the new Triumph Speed Twin. It is, objectively, stunning. Its proportions are spot-on. Its profile is divine. The negative spaces are on the money. Its stance is perfect, and no matter what angle you choose to look at it from, it delights the eye and thus nourishes your soul. 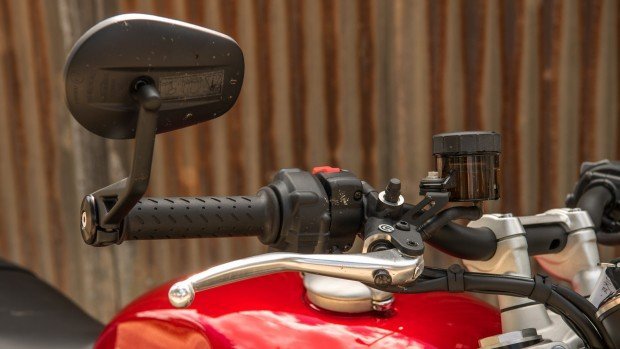 Triumph makes the best bar-end mirrors in the world ever.

You do not look at it and think: “Maybe they could have raised the headlight up a touch, or maybe if the seat was different, or maybe if I throw them mirrors in the bin, or it will be better if I put a tail-tidy on it…”

You look at it and just nod and smile. It is a true aesthetic symphony of brushed alloy, stainless steel, and luscious paint. 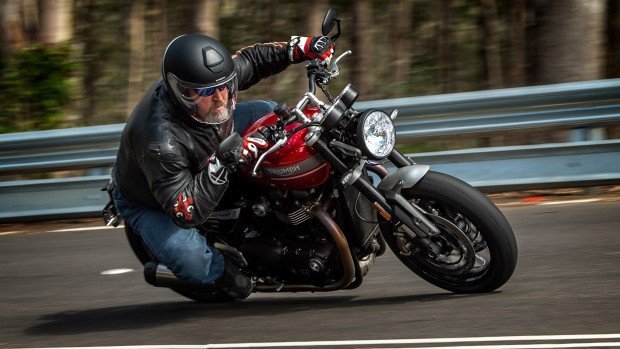 Where was this bike when i was running from the cops back in 1988?

And then you go ride it…like, really ride it, dry-mouthed and feral like you know what you’re doing, and you might very well start making plans to own one.

It’s been a serious re-jigging of the Speed Twin this year. Someone at Triumph has stopped poncing around and decided to turn the already pretty and relatively capable Bonny-engined Speed Twin into a kick-arse hooligan icon. 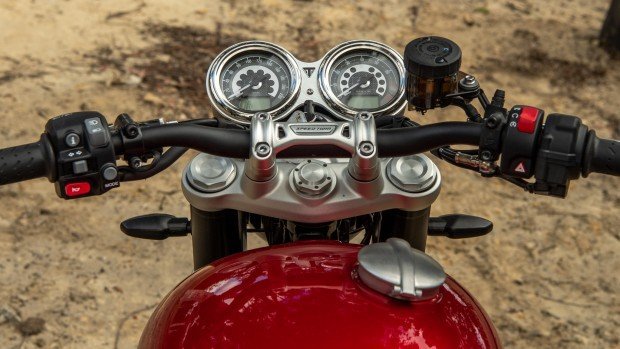 I would have preferred the clock-surrounds present themselves in black because the chrome is bright and my eyes are old and I’m easily distracted by shiny things.

The new crank offers 17 per cent less inertia, the compression is higher (12:1), and there’s new cam profiles and some work’s been done on the porting. And it’s a touch de-porked, tipping the scales at 216kg (wet), and boasting lighter wheels.

And who cares, right? Because it rides like…well, it rides like a whole lot of people wish a bike would ride like. Easy ergos (and that gorgeous slim seat is all-day comfy), and an astonishingly responsive and eager motor make the Speed Twin a true joy to ride. 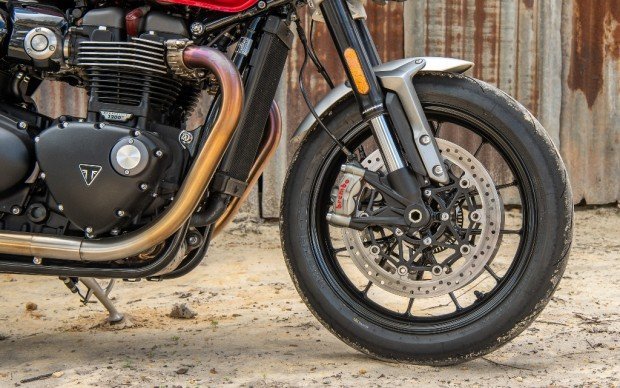 Big-boy Brembos…but note the pleasing sweep of the stainless steel pipes as they exit the head.

But look closely and you’ll see Triumph has pushed the new Speed Twin into the Grinning Evil part of the Girls Are Watching Spectrum. The tyres are Racetecs. The brakes are Brembo M50s. New and thicker upside-down Marzocchis live at the front. The feverish yammering is your heart when you add all that up and fire it down the road.

And it’s beautiful. I know I’ve told you that, but I’m going to tell you again because it’s an article of faith and a statement of fact.

I spent a very happy three weeks with the Speed Twin. I was happy because I never felt in over my head when I was trying. The power doesn’t come on like a punch to the throat – it’s more like a meaningful choke-hold. It builds speed willingly and confidently, and it doesn’t run out of puff until you’re looking at a number starting with two. 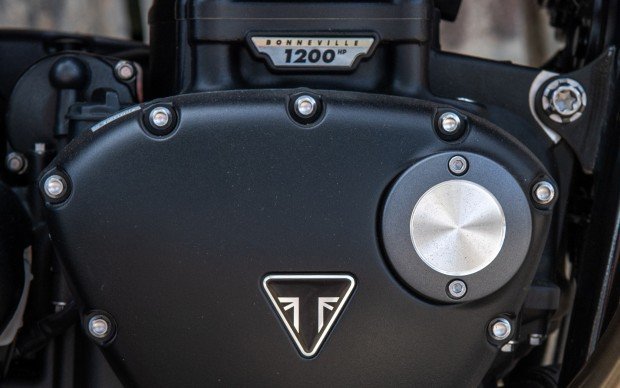 Tidy, neat, and very up-market in terms of build-quality.

It was also quite sure-footed in sketchy damp conditions on the Putty, which is a huge plus – and that can only be that combination of great ergos, great tyres, great brakes, and a powerband that isn’t clinically insane in its delivery.

It’s got three modes (Rain, Road, and Sport), but I never even bothered with anything but Sport. Nor will you, unless you’re weird. 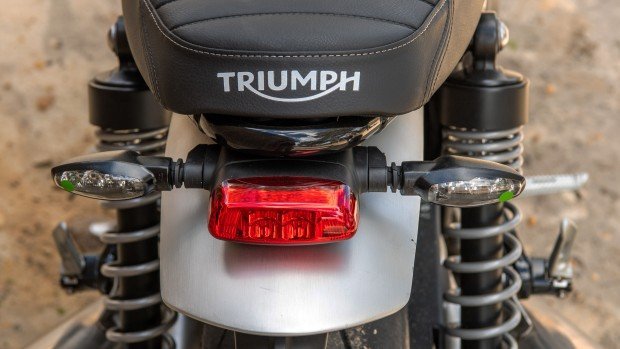 The whole package is geared towards accessibility and useability. Newer riders will not be intimidated and old warhorses will be delighted. That is one hell of a juggling act by Triumph. If I bought one I would put some very fancy shocks on the back and maybe seek to upgrade the front springs. Not because the bike needs it – and normal people will certainly find no issue with the suspension – but because I’d like my suspension to answer questions I only sometimes dare ask.

To be honest, I was quite surprised at how much I liked it. I have always liked the big 1200s, and adored the Thruxton even though it did ask a lot of my old body. But this? Hell, this is the Thruxton with a much more practical riding position. And as the days went by and the miles stacked up, I started to love the damn thing. 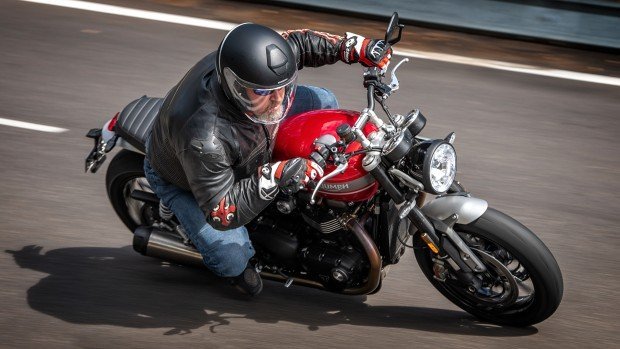 Nick climbed into a tree for this one, so I best use it.

Was it my age? That was not it. I still chub up at the big-bore super-missiles, and I want a Rocket 3 like I want oxygen.

Was it my outlawness? Perhaps. I once owned a 1979 Triumph Tiger, and this new Speed Twin ticked those boxes hard.

I thought long and long on this. Why did I love this bike? 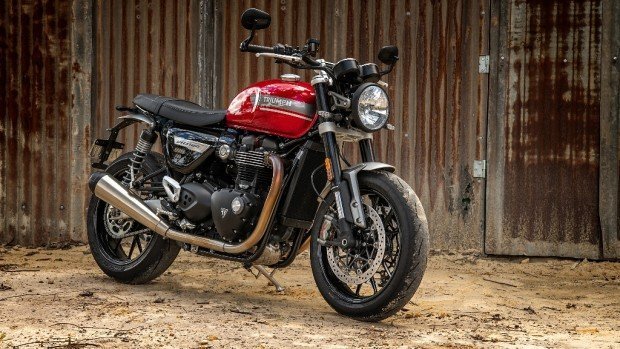 Give me your boxes so that I may tick them.

The answer was actually quite obvious. There was no hidden gem of mystery here.

I loved the Speed Twin for the pure and damning reason that it was beautiful and it went brilliantly. A formula so simple and obvious it eluded me at first. 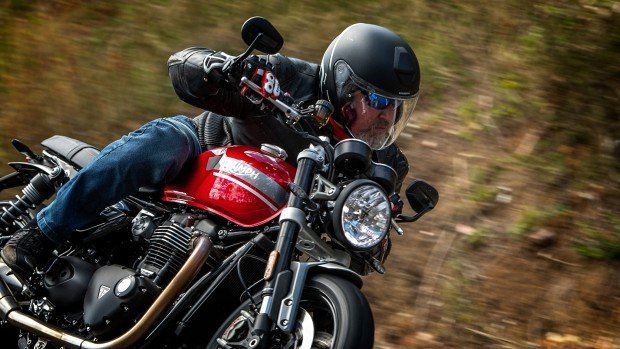 It’s what makes the world go around.