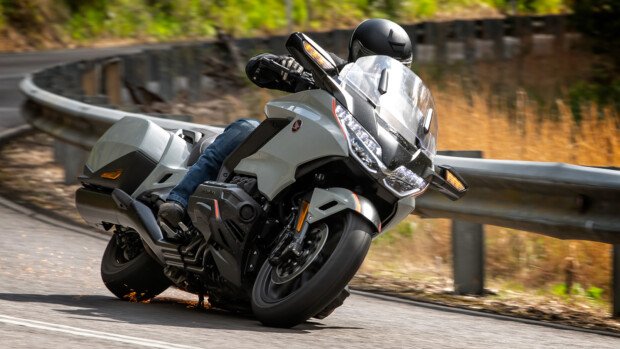 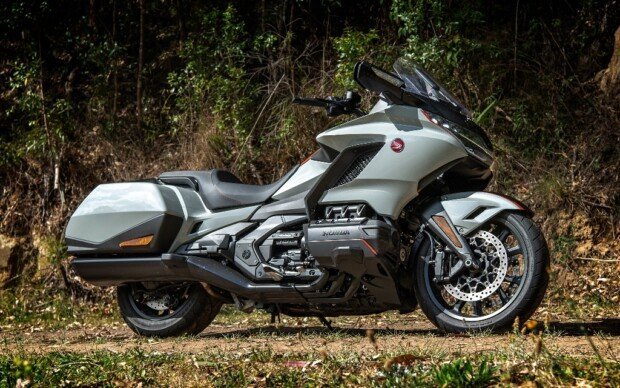 A statement in any language.

What a magnificent behemoth this is. Fast, stylish, and smoother than coconut butter on a sunbaking centrefold, Honda has somehow, once again, improved what many thought was unimprovable.

So this is the bagger iteration. The Goldwing Tour is the one with the top-box and mega pillion-seat. You should buy this one if you do most of your riding solo. If you spend most of your time alone and buy the Tour version, it’s gonna look a bit weird and creepy and…well, expectant. You don’t want that. 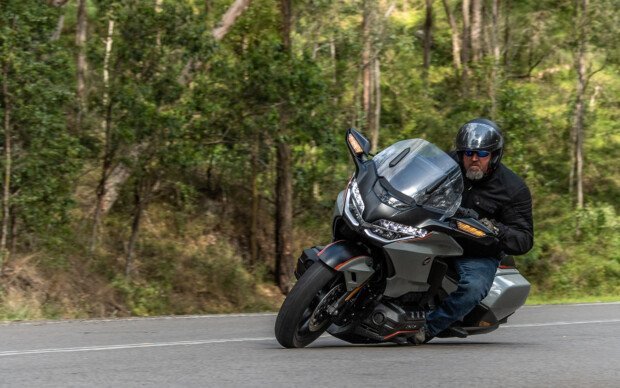 It’s more unflappable than you. Or me.

So how has this amazing touring package improved from 2018 when it was first granted to the expectant world? 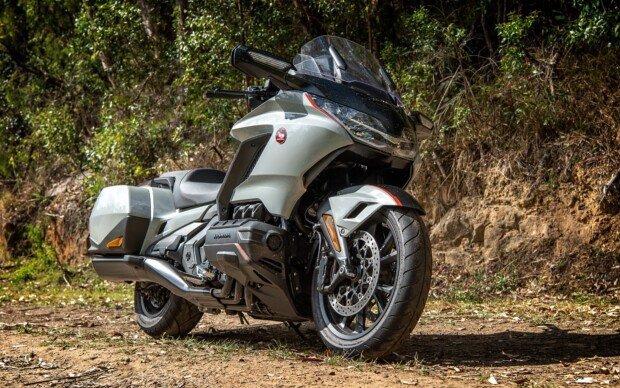 Easily the finest-looking Goldwing ever made.

Honda has produced a completely new twin-spar aluminium chassis, which is two kg lighter than before. Which is nice. And perfectly complements the double-wishbone front suspension set-up – a first for Honda when it brought that out in 2018. So it’s only got two Showa shocks – one up front and one in the rear. If you’re on my version, you can adjust pre-load on the back manually, but if you’re on the full Tour Premium version, this is done electronically for you. 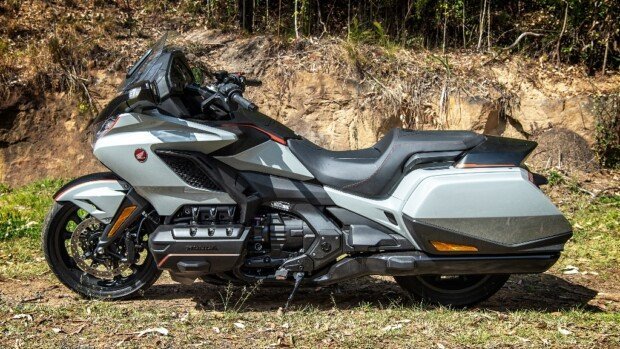 One of the very few perfectly symmetrical bikes on earth. It’s the same on both profiles.

The brakes are new too. They are linked, six-piston brakes are monster-level good, and there’s been a world of improvement in the ride modes – Sport has lost its vague wallow and hesitancy, and the softer Touring mode still allows you to slam it into a bend without screaming coming from everywhere. I do love it when a gun Honda tech reinvigorates the computer program which speaks to the fuelling and says: “Be better at this, damn you!”

It’s lighter – like heaps. A whole 48kgs is gone. The engine is 6.2kg lighter, and the old starter motor has been replaced with a 2.4kg-lighter unit. So while the essence of the engine is an unchanged 1833cc, horizontally-opposed six-cylinder slamming out 170Nm at 5500rpm and 126 horses – it’s far smoother and more willing – and much better at low speed maneuverability. 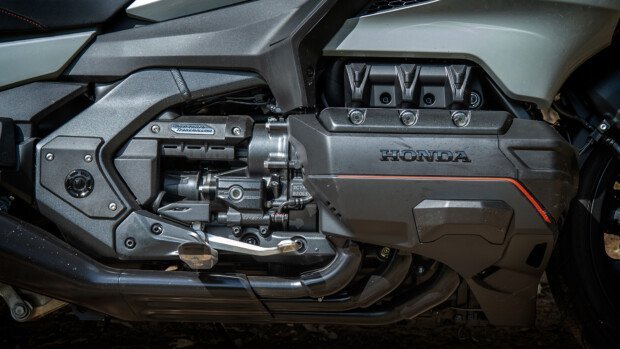 One of the world’s great motorcycle powerplants, mated to a flawless gearbox.

She’s a big girl – all 364kgs, but she’s a lot more agile than you could ever imagine – and just fine at low speed if you’re trickling through traffic.

The Automatic (DCT) version (and there is a manual iteration, but Honda is no longer bringing it into Australia because no-one wants it. Everyone is buying the DCT unit) has seven speeds and the computer controlling it all has a bigger brain than our parliament. If a seamless automatic gearbox has any place on any motorcycle, this is it. As my brother, Nick Cruth, observed: “The DCT transmission has finally found a home”. 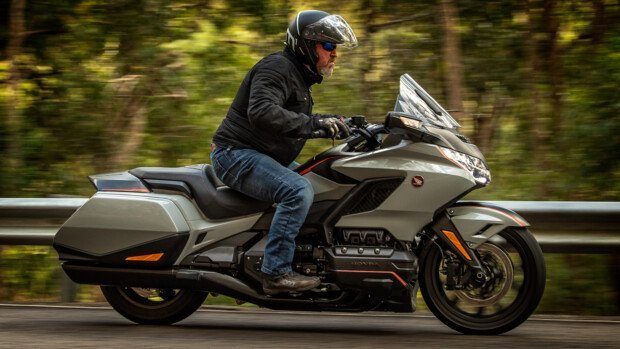 When you’re coming in hot, relaxing into that great seat is not what you need to be doing.

The Goldwing is the right bike for it. And it’s brilliant in the execution of its duties, which are to have Sir in the correct gear for whatever Sir happens to be doing at the time. So it does just that.

But should Sir suddenly evince a strange desire to be in a gear other than the one the Goldwing feels is correct, Sir can press a button on the left handlebar – plus or minus – and choose a gear Sir feels might be more appropriate. Sir will usually be wrong in this, but hey, Sir is gonna do what Sir is gonna do. 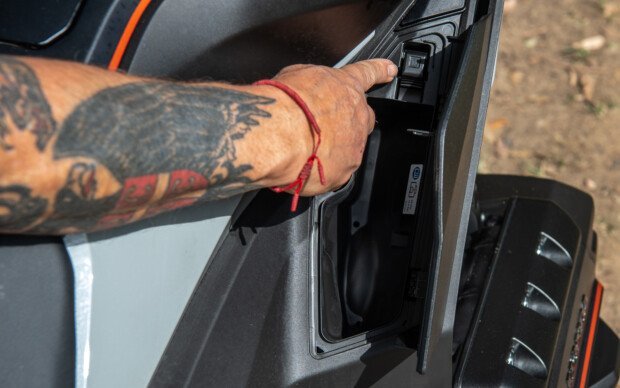 You can plug the tattoo gun in here if it’s USB-driven. And store your sunnies at the same time.

I only ever used the minus button to get around trucks with a touch more vehemence than I might have needed. But that’s me.

This is how it goes – and bear in mind, the Goldwing changes its gears with more zest in Sports mode than it does in Touring mode – you are approaching a corner at speed and you look at the dash. It tells you you are in seventh. The corner is a hundred metres away, and if you were in charge, you maybe would be down-changing into say fourth if it’s a sharp corner. 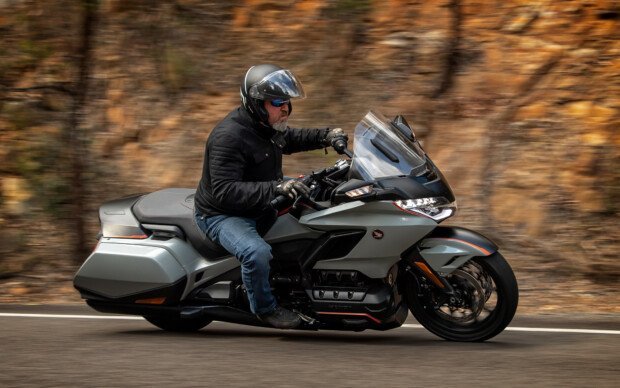 See? Lots of ground-clearance if you’re a vegetarian Christian.

The corner gets closer. The bike stays in seventh. You furrow your brow and prepare to take the corner by applying the brakes a touch. Suddenly and seamlessly you are in the right gear for the corner. You want to exit hard? Bang open that throttle, and the Goldwing will select a gear for just that purpose. 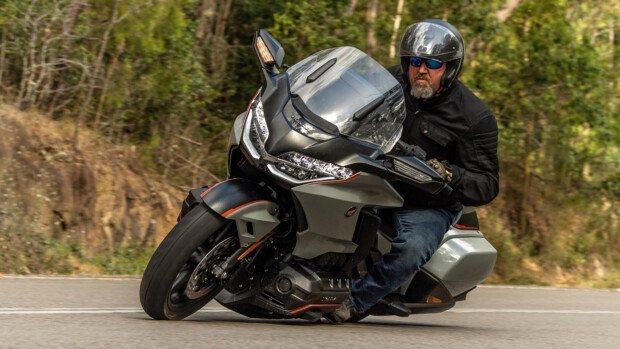 But you can worship Satan and eat meat. It likes that too.

It’s a concept that is alien to riders. But you’d be amazed at how quickly you’ll come to terms with it. And then you actually start to like it.

Don’t like it? Press the M (Manual) button on the right-hand handlebar and change gears with the plus-minus button at your other hand. I did that. It got old quick. The bike is better at this than I am. And without a manual clutch, there’s no point. 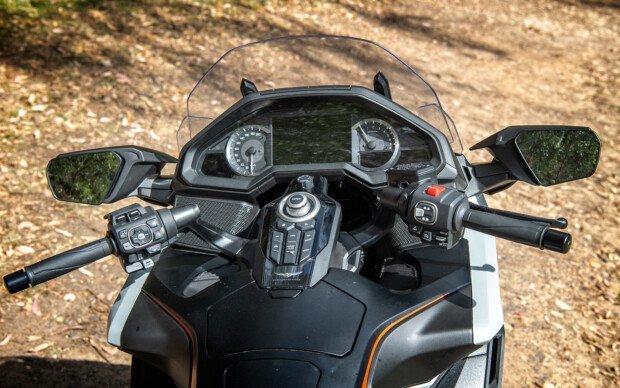 Great dash. Good stereo, and the usual Goldwing back-up controls on the top of the tank. They are replicated on the left-hand switchblock.

The early Goldwings were always somewhat of a visual challenge. Yes, I know I just offended a whole bunch of old people, but it’s the truth. That the damn things went and handled was all well and good. But they looked vast and ungainly. And by comparison to the 2021 offering, they certainly were. 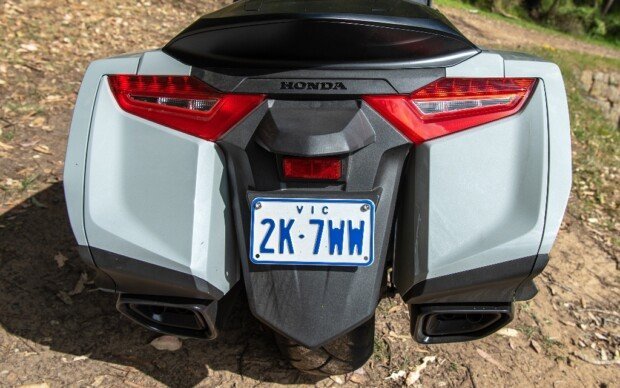 She’s got a broad back-end. You cannot get a helmet into the panniers. But, if you bought the Tour Premium version, then you can get two helmets into the top-box.

The Goldwing is objectively a gorgeous thing. It’s slimmer, svelter (I know that’s not really a word), and quite tough-looking from its three-quarter front-on angle. 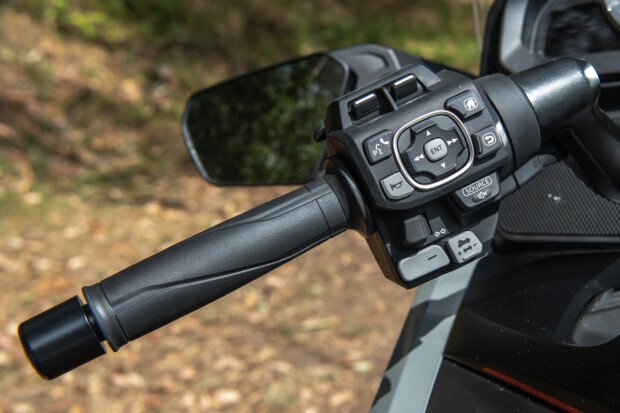 It does pretty much everything from here. And it’s quite easy to work it out without resorting to YouTube. I did it. And I’m technologically retarded.

I’m sure you’re keen to know how comfy it is. Really? How can you imagine it is anything other than supremely comfortable? The Touring version has even angled the pillion-seat more uptight to take pressure of your lady’s hips and spine, and my wife was perfectly at ease on the bagger iteration despite its lack of backrest.

But, because Honda, both the rider and the pillion can add a backrest to the seats on the bagger. For 2021, the rider’s seat is also narrower at the front, so it’s easier to reach the ground – and if you’re wired like me, maybe haul your dad-bum off the seat for some cornering exuberance. 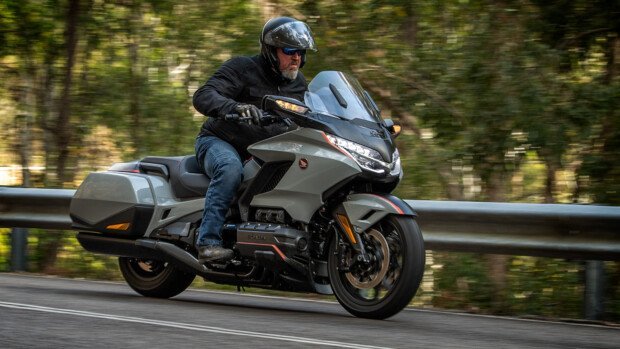 If Marquez remains blind, I am ready to step into the breach. Hear me, Puig?

Concerned about fuel economy? How cute. Put it into Eco mode, you strange superchief, and the normal 380-km-range will be extended slightly. How much? I have no idea. I do not put bikes into Eco mode. No bike I ride has any business being in that mode because I do not sit down to make my water. But you do you, OK?

The build-quality of the Goldwing has yet to be surpassed by anything I have ridden in recent times. It can be equaled (the Germans do have a dog in this fight), but it cannot be beaten. This is the last world in motorcycle luxury touring. The paint is horn. The buttons solid. The chrome deep. Honda has even double-metalled the exhausts so that heat will not offend Sir’s or Madam’s delicate thighs. 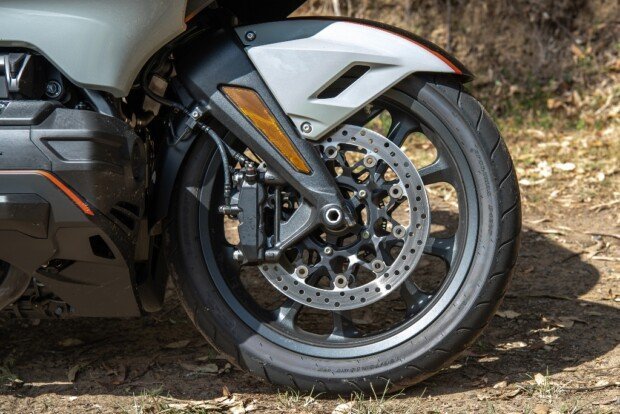 Brilliant. And linked. And that’s a good idea on the Goldwing.

On the road, and I did put some miles on it, the suspension, ergs, and that madly comfy seat offer an unapparelled touring experience. Not having to change gears is quite noveaux for me, but as I said before, the concept is at home in this bike.

And that’s the end-game for Honda. Offering Sir a brilliant touring motorcycle. This is a concept Honda has always embraced. And it has always gone its own way in this regard. The Goldwing has always been THE long-distance super-comfy, super-capable bike – and one which has always angered up the blood of the cos-playing pirates waving Milwaukee’s flag. 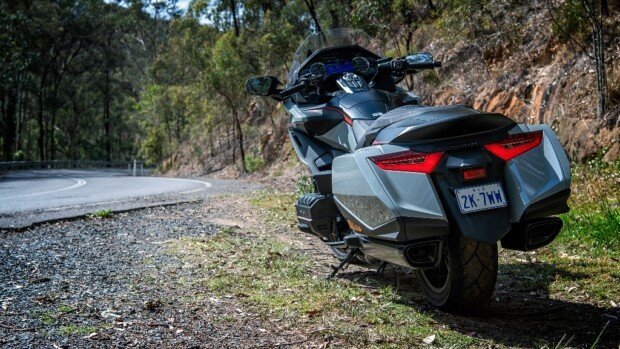 There’s a certain joy in having music play while you relieve yourself by the side of the road.

In every possible way, the Goldwing is a better touring proposition than a Harley or an Indian. It’s way faster, way more comfortable, way better suspended and braked, way better handling, and waaaaaay better built.

That has been the case pretty much since the Goldwing first came among us. And today, in 2021, that case has only gotten stronger. It’s ironclad. It’s open and shut, people. 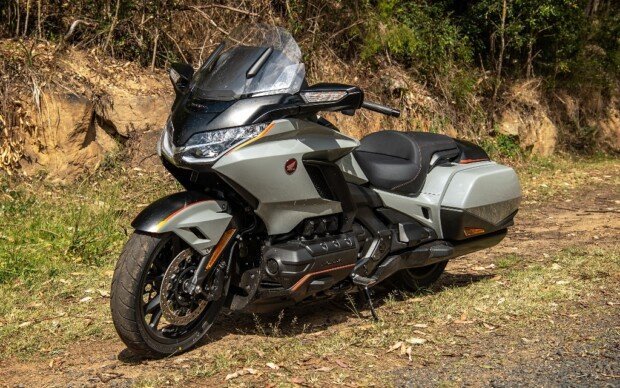 Majestic? I reckon so.

I set it out like this, ladies and gentlemen of the jury.

If you desire a motorcycle that will effortlessly waft you from one end of the continent to the other, if you seek a bike that will sear your brain with its sheer ability to wonderfully do things a bike so vast shouldn’t be so good at doing, and if you’d like a bike that is a byword for quality and reliability, you should go try a Goldwing. 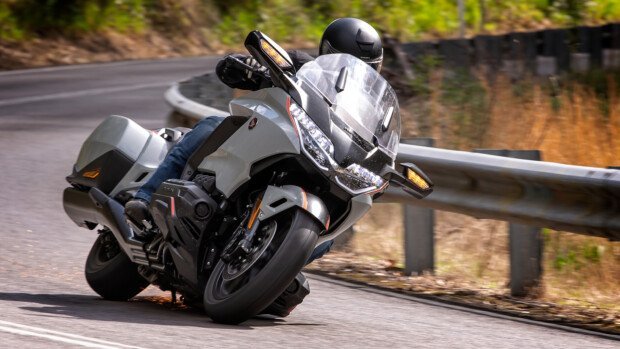 Off you go. Try not to start any fires.

To see the options available and examine the specifications in more detail, go HERE…