How I missed that tree is a miracle…

I guess it important to address the elephant in this room first. So be good enough to smooth your skirts, ladies. I’m gonna say some things that might cause some huffing and puffing. Its armoured belly is ready to smash stuff.

The Africa Twin is an Adventure bike. It’s possessed of stunning good looks and some quite serious dirt ambitions.

There’s that gorgeous gold-hued 21-inch spoked front wheel, perfect stand-up ergos (the handlebars are 22.5mm taller), a righteous 1084cc parallel twin engine which is no longer the slightly breathless 998cc version, and all at a reasonable 248kg. A relatively strong man could be happily picking it up out of table drains all day. 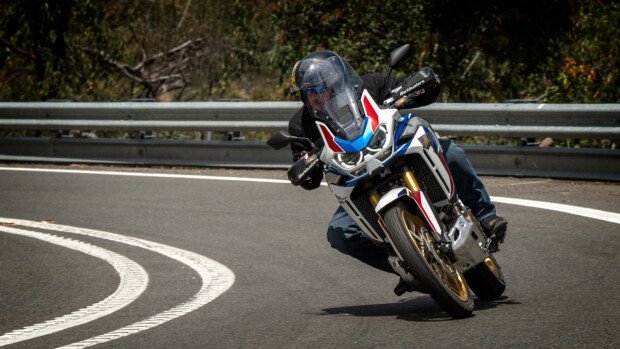 Perfectly at home on a surface that doesn’t move under it.

So about that elephant? It’s an automatic. 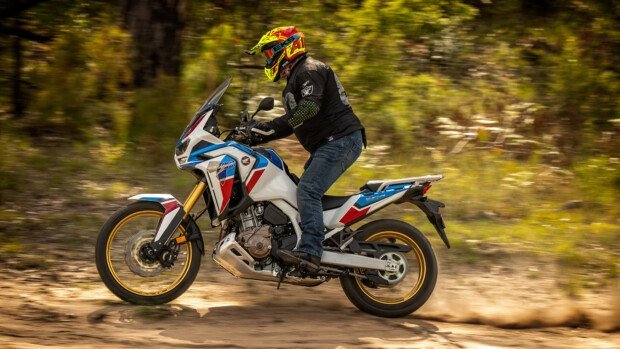 Got hit in the face seconds later.

I made the same noises when I first got it too. Like what was Honda thinking sticking its Dual Clutch Transmission (DCT) in this pretty girl’s guts? I actually said: “What the utter (swear word) is (swear word) going on here?”

How was this gonna work? I thought, visualising myself hammering down some treacherous scree-strewn cliff and reaching for a clutch-lever that was not there. 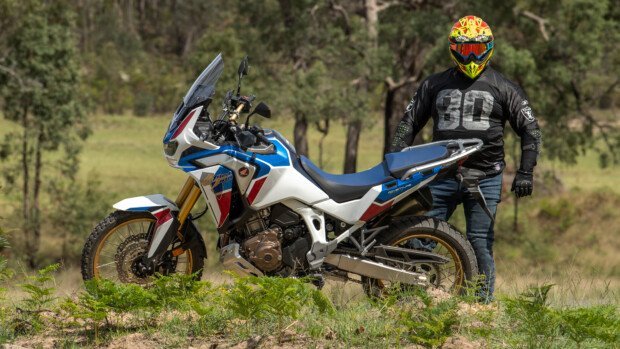 The helmet that can be seen from space. Go Raiders!

Yeah, except that scree-strewn cliff is all in my aspirational imagination. It’s like when I see one of them Dakar gods skating along the rocky desert at 160km/h and think to myself “Hell, I could do that!” The new screen and the back-up screen underneath. Note the petrol gauge. I had already been riding for an hour-and-a-half.

Except I can’t. And neither can you. And the vast majority of people who buy Adventure bikes certainly can’t do it either. You wanna do hard-core single-track stuff, you’re going to be buying something else. You’re definitely not going to be buying what we have come to call “Adventure” bikes. 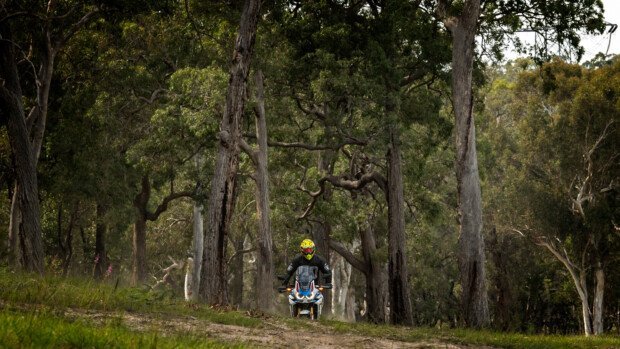 And then I got airborne! Yes, I’m lying…

The bulk of the Adventure bike market spends most of its time on the tarmac, with the occasional forays onto dirt – and most of that dirt is really good dirt. Friendly dirt. Dirt that doesn’t seek to cripple you if you put a tyre wrong, but let’s you think you’re adventuring like a Dakar rider when you let that back tyre spin a bit. If Marquez is still blind, I’m ready for the call, HRC…

What makes Adventure bikes so popular is that they’re actually superb touring bikes. Long-travel suspension, comfy seats, great luggage-carrying capacity, and able to carve tarmac corners with the best of them. And they can be taken off-road. In a country like Australia, they make all sorts of sense. 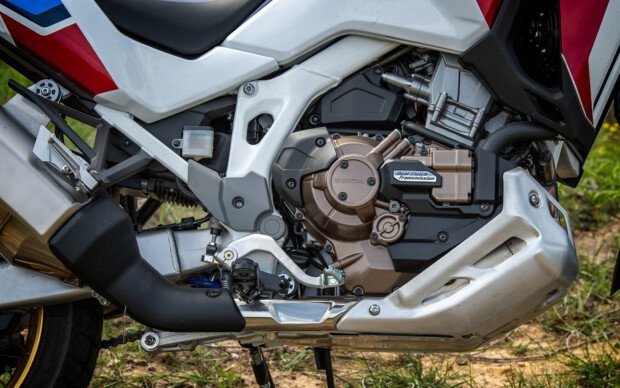 So given all of that, sticking an automatic gearbox on the Africa Twin is not an unreasonable proposition. In fact, after a few weeks and some decent miles, both on and off-road, it had me hooked. It was easy to ride on the dirt. It was easy to ride on the road. If I thought I needed a different gear, I’d apply my left thumb (downshift) or left forefinger (upshift) to the switch on the left-hand switchblock and that would be taken care of. I wasn’t missing the clutch at all. 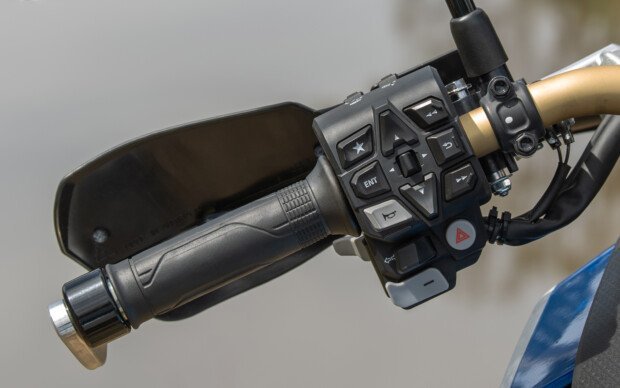 It looks horrifyingly complex. But it isn’t. Seriously.

Does it take getting used to? Sure. But we are the cleverest and most adaptable of monkeys, are we not? If you’re still struggling with the DCT after an hour or so, then your family line should probably die out any way. You’re bringing nothing to the evolutionary ladder.

The Africa Twin works. You might think it won’t, but you’d be wrong. It’s OK. I thought the same until I rode it, too. 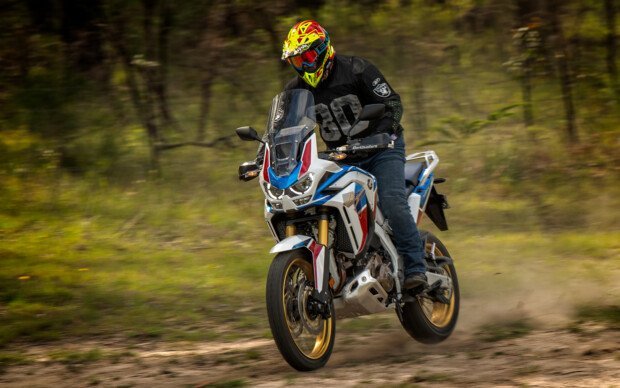 You can pick one of two dirt modes if you wanna get sassy on the dirt. It has a six-axis IMU, which makes it corner- and slope-responsive when it’s picking gears for you. The new 6.5-inch TFT touch screen responds, when it’s standing still, to your gloved hand like a cheeky slave. And it has a USB charge point. It takes you to places where buffalo poo in rivers.

Its electronic sophistication gives nothing away to the competition. Cornering ABS and seven-level traction control, cruise control, four power modes, three braking levels, and three whole wheelie levels (presumably “Cool, huh?” “Are girls watching?” “OMFG I’m gonna die!”). You also get four riding modes and two programmable user modes. And they are easy to adjust. Honda must know I’m retarded when it comes to that stuff. Embracing the serenity. And knowing I shall ride out of the serenity because it’s a Honda.

On the road, where it will doubtlessly spend most of its time, the Africa Twin feels a lot more stable in the corners than its predecessor did – and it will surprise and delight when the going gets fast. I did struggle with its wide tailpiece impinging upon my magnificent hanging arse when I tried getting off the seat to add some drama to my ride. So I stopped doing that. Problem solved. 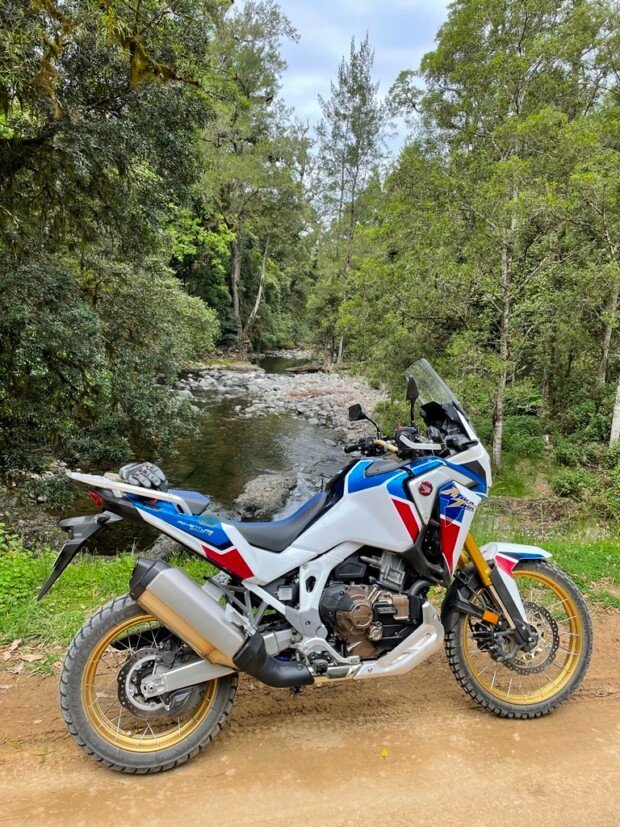 The danger of crocodiles was slim.

If you’re like me and dirt holds no special fear for you, but you spend most of your time on the bitumen, the Africa Twin may well sing the song you want to hear. It may look tall, but it’s very narrow and putting your feet on the ground is easy.

It’s beautifully finished, and to my eye, one of the more handsome Adventure insects. The seat is firmer than it was, but I’m appreciably more leathery than I was ten years ago. I could and did do all-dayers in the seat. The screen could be taller – at least that’s what I thought until it hit me in the face during the photo-shoot when I came over a bump and my head was in the wrong place. Or my neck gave way. Or I don’t know. It happened. Good thing I was wearing a helmet, huh? But on the road, the screen could be taller. Or I could stop nit-picking. It’s really no biggie.

What is a biggie is the fuel economy. The tank is vast. A whole 24.8 litres is drip-fed to the engine via a truly scrooge-like tune. I’m thinking you could get 450km if you’re being mindful. These worked. Of course they worked. Did you think they wouldn’t?

Honda has aimed this year’s Africa Twin more directly at the roads less travelled. But this has not compromised the bike’s bitumen kung fu. It’s maybe improved on it a bit, if anything. And the Africa Twin may give some bang away to its top-end competition, but not in any meaningful way for most riders. 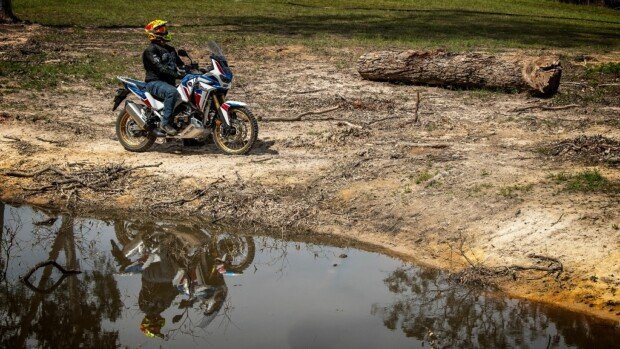 To swim, or not to swim?

For the most part, it’s beautifully-mannered, makes no hideous demands upon you, accepts your skill-levels with grace, and delivers you a wonderful ride, which is engaging despite its lack of clutch and gear-lever. 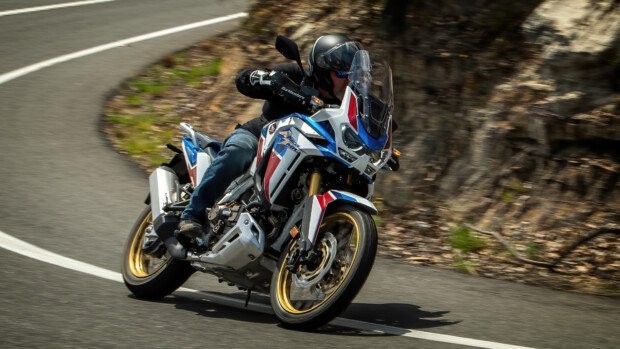 The headlights are pretty good at night.

And it comes in the colours of the Serbian flag – which is most thoughtful of Honda. 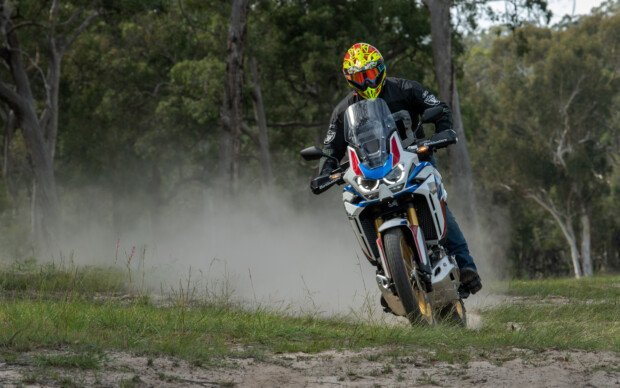 You may examine its specs and variants here…