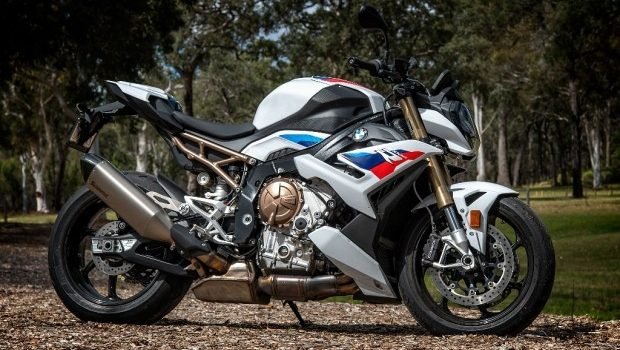 IMAGES BY NICK ‘I’LL GET UP IN A MINUTE’ EDARDS 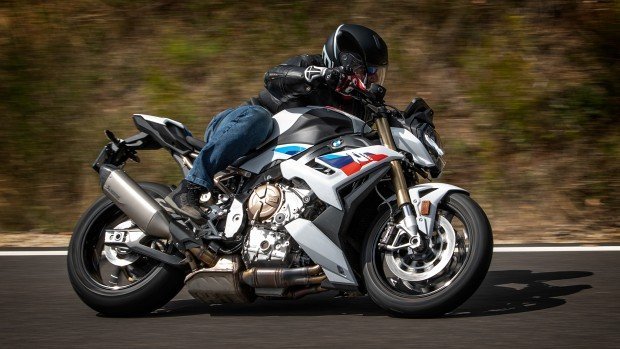 It’s so much better at this than I am.

I’m going to tell you right up front the BMW S1000R M-Sport is one of the most brilliant bikes you can buy.

It’s demonically fast, offers you handling and ride-integrity you’ll never find the limits of, comes with goosebump-making carbon-fibre wheels, a chain made out of sorcery, stunning levels of finish, and looks like a mailed fist full of clenched intent.

There is a primal joy to be found in pushing it hard. It’s so good at what it does – so distilled, pure, and unfussed in the way it deals with your aggression, it’s like it’s performing some kind of neat magic trick. 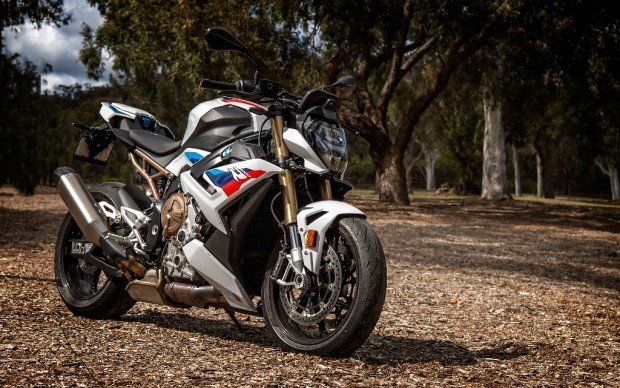 Yeah, it does wanna fight you.

Surely the silly numbers you’ll see on its TFT dash are lying? Because it sure doesn’t feel silly. Nothing is shuddering. Nothing is being sketchy. Everything is simply being dealt with. You could have entered that corner at least 30km/h faster, and got on the gas much harder and earlier than you did.

And you know that. Now. After the fact. 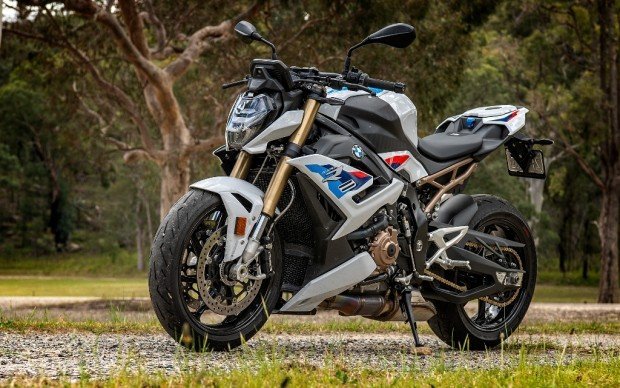 The pillion can catch a cab.

See how that works? See how what’s happening expands your skill-set? 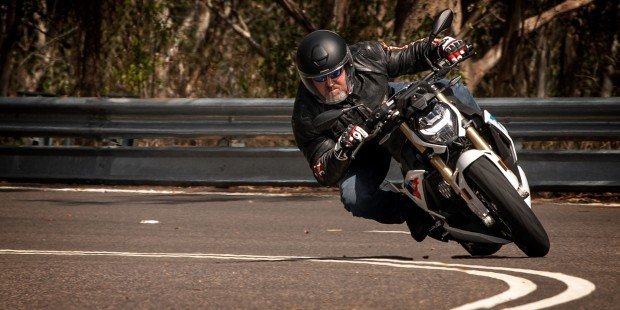 This is one of those moving apexes you read about in books.

But there is not a doubt in my mind some of you will sniff in dismissal because the S1000R is not the S1000RR with the fairings torn off. 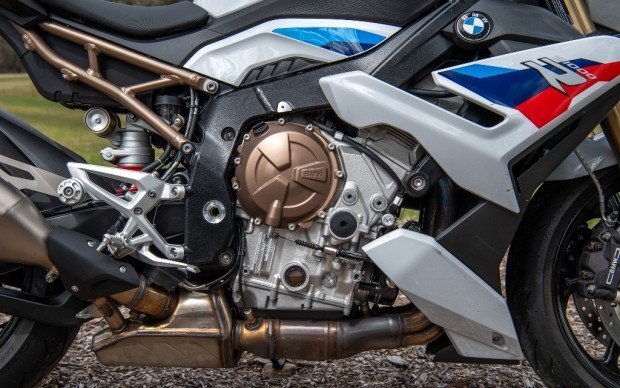 And yet, somehow, you got rounded up on the corners by some wildman riding a clapped out old 850 GS shod with rotting Chinese tyres (Hi, Deano!).

Where was all that horsepower you were buffing yourself with when that terrible thing happened? Yeah, that’s right. In your brag-bag back at the café. 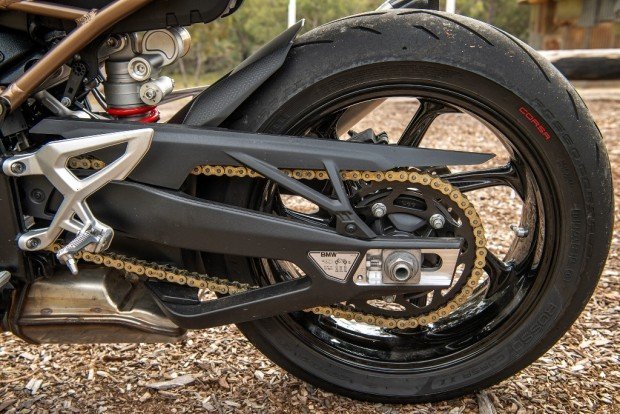 See that chain? You’re going to be seeing it for a long time.

And I want to hit you in the heard with a turnip when you say to me “Oh, I wish the S1000R had the same horsepower the RR has!” 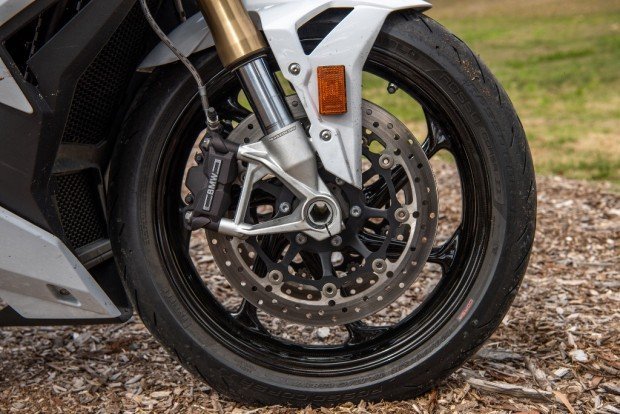 These are Hayes calipers. Not Brembo. I’m not good enough to prefer one over the other.

Why? It’s not like you’d be any faster on it, would you? In fact, I’m willing to bet you good money that on any given given windy road, you’d be faster on an S1000R than you would be on the track-focused RR.

There are a few reasons for that. And they have nothing to do with the horsepower you think you’re being cheated of. Horsepower is all about you standing on a milk-crate and beating your chest. It means little on the road and everything on the track. 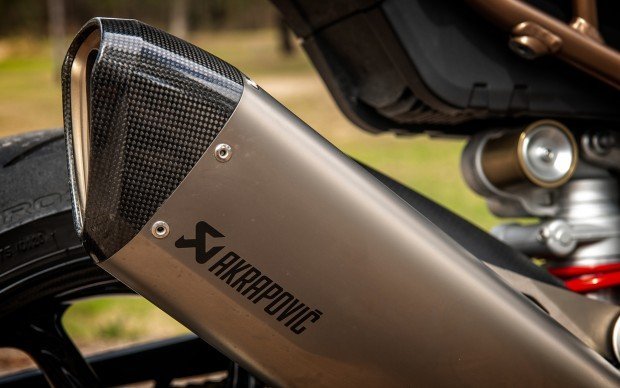 It’s handsome, but not loud. I believe that can be rectified with prayer and a file.

That is why the S1000R is so devastatingly effective on the road. That is why you, and your utter lack of MotoGP-level riding skills, are better served by an S1000R than and S1000RR.

The distillation which has gone into making the S1000R such an effective road-weapon is to be admired and applauded rather than sniffed at. Trust me, chief. You are not going to miss not having 207 horses. You’re not even gonna notice. Ride them back to back. See for yourself. 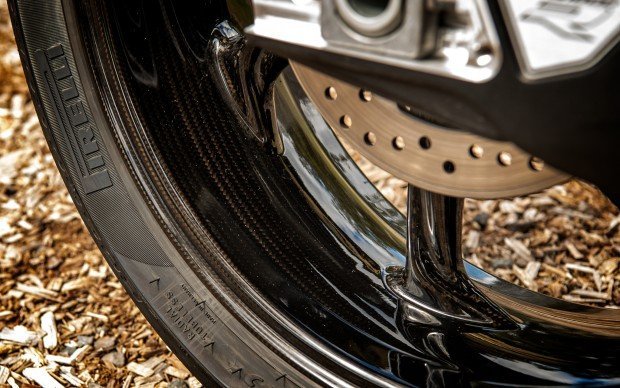 Yes, it’s right to pleasure yourself over carbon wheels.

Now then, where was I? Oh yes…

How is this beast improved from last year’s? A bit. it’s lighter all around, tipping the scales at 199kg, which makes it the lightest in this class along with the new Speed triple RS. The frame, subframe, exhaust and swingarm are all lighter.

Your knees are closer together and the handlebars (which are adjustable) pitch you forward more, and the suspension is all new, with the rear shock boasting a bigger damping piston, which, when coupled with the DDC semi-active control option and more refined settings, give you a  far more comfortable ride. If you’ll recall, the previous iterations were a touch harsh.

The M-Sport incarnation of the S1000R will certainly add a few bucks to the price of the base S1000R – and already competent weapon, make no mistake. 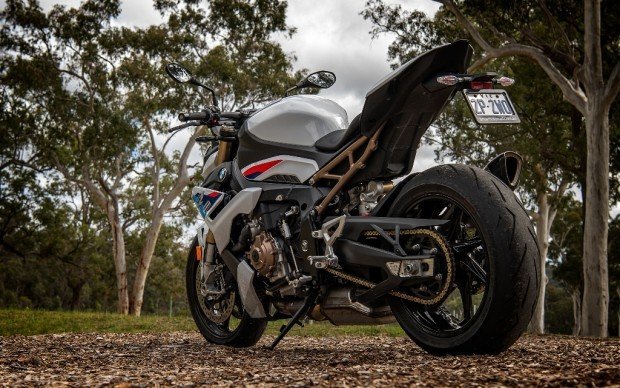 There’s quality in every line.

But the simple addition of the carbon-wheels makes a very noticeable difference to its handling. Unsprung weight is the crucial factor here.

Unsprung weight is one of bike handling’s Holy Grails. The heavier your wheels and brakes, the harder your suspension has to work to keep that all on the road. Lightening that load is a revelation in terms of handling. 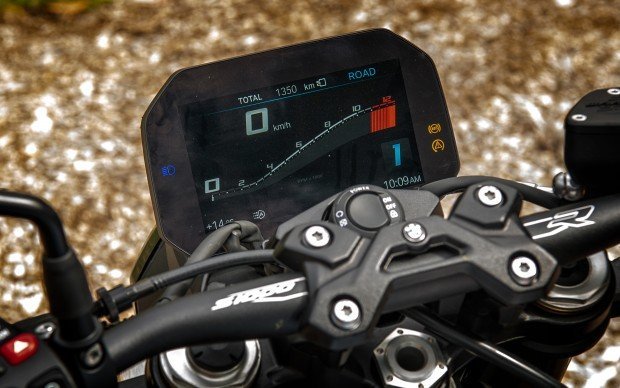 Still one of the best dash-layouts in the business. Simple, easy-to-read… 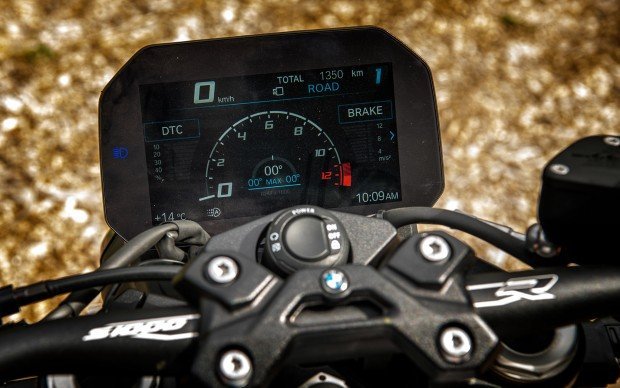 …and with an option to see other things of interest.

That is the magic of super-light carbon wheels. And that is why I would spend the extra bucks on the M-Sport package. Sure, the extra goodies – sports can, embroidered seat, lighter battery, a GPS-Laptrigger, and the M Endurance chain – are very welcome. Especially the chain, which you might have been told is now “maintenance free” and will last the life of the bike.

Pilgrim, nothing is “maintenance free”. What this new chain offers you is vastly reduced maintenance and a much longer chain-life. You’ve still got to do the odd adjustment, clean and lube, OK? 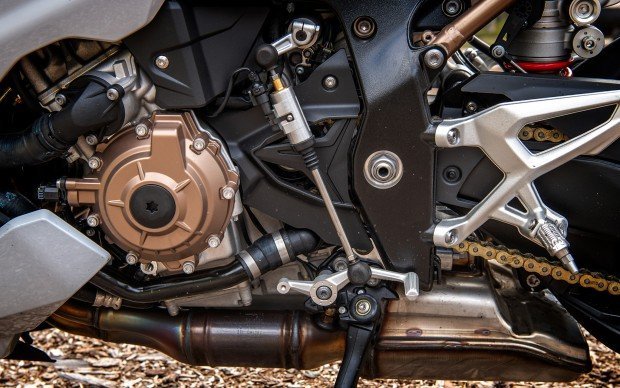 I’m a little addicted to quick-shifters – and this is one of the best.

It is still an X-ring chain, but you’ll notice it’s a different colour to traditional chains.

The M Endurance chain is coated with a diamond-like coating that doesn’t wear off easily, or require lubing or adjustment as often. You could maybe do this once a year if you’re not smashing out vast and hard miles, instead of once every few months. 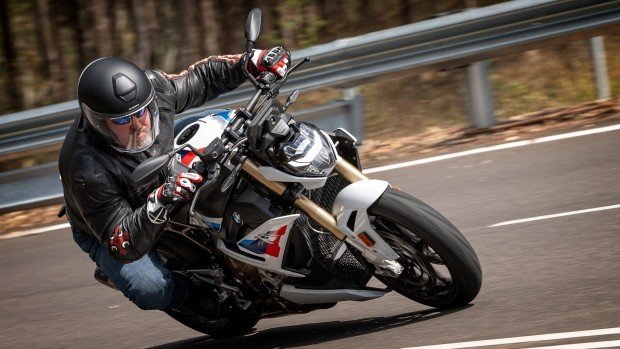 Even old people can get up it a little.

It’s very much a suck it and see thing. But it’s still a great and good thing. Anything that lessens the time you spend doing the dirtiest job on the bike – chain lubing and adjustment – is to be celebrated.

So the M-Sport does look special, as it should. Compared to the base model S1000R, it is special. The wheels, chain, and assorted bling make it so. 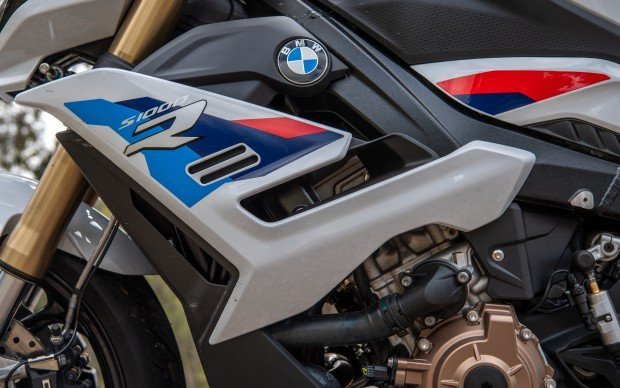 Some wings could have gone here.

Will you notice this difference and is it worth the money? My answer to this is yes – in the very first corner you jam it into – and yes, it’s totally worth the money.

But that’s me. I’m sure there will be lots of lip-pursing at my profligacy with money. That’s OK. I’ve never been about the money. I’ve been about how much happiness (ie. Handling, power, and sexiness) that money can buy me in a motorcycle. Money is a means to an end – otherwise what’s the point of it? 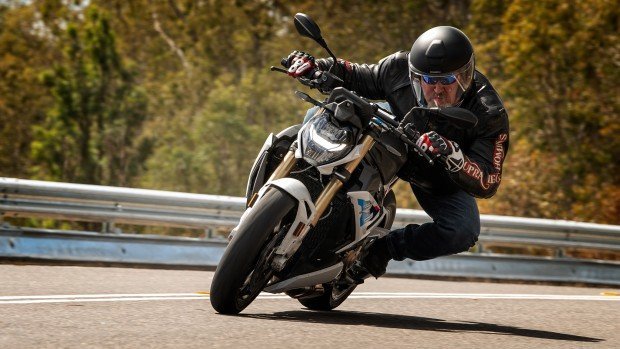 This is me being profligate.

But you do you, OK? I’ll eat one-minute noodles for a month if it means I can put carbon-fibre wheels, a chain I only have to look at once a year, and an M badge, on my S1000R.

I had the S1000R M-Sport for a while. I put some robust kays on it. It always delivered. No matter what I asked, how over-committed I got, or how ham-fisted my inputs were, when I put my head down and applied myself to that marvellous quick-shifter, the bike delivered it all with unflappable aplomb.

It’s one of those bikes that makes you feel a bit special when you ride it. It’s actually very good at doing that. And I do like to feel special. Who doesn’t? 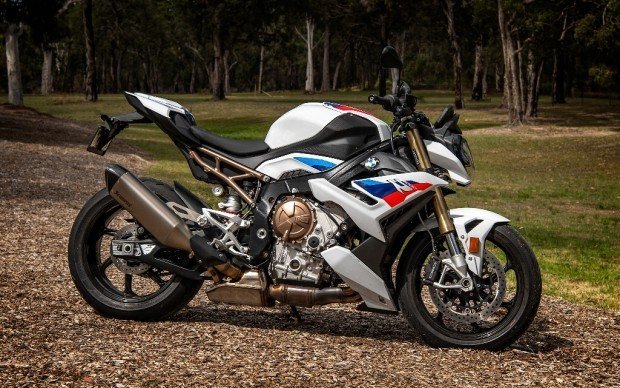 Its refinement and accessibility is precisely what makes it so capable on the road – allowing the rider to confidently explore the outer limits of his limited abilities is no small thing. It’ll nurse you gently onwards and upwards while simultaneously ramming crazy velocities and sublime handling into you. Like I said – it will always be better than you.

Ergonomically, you’re tilted forward on flat ’bars, but not in a way that’s remotely tiring. It’s a business-like riding position. And on an S1000R your business is always clear. And easy. And very, very fast. It’s quite a hell of a package in that regard.

It’s not possible to find negatives on a bike like this. There are only levels of personal satisfaction and subjective observations.

My personal satisfaction was through the roof. I have heard people say things about the S1000R that defy logic, like “It’s so good it’s boring”.

Boring? Because it’s so good, and so fuss-free being so good? Oh, OK. 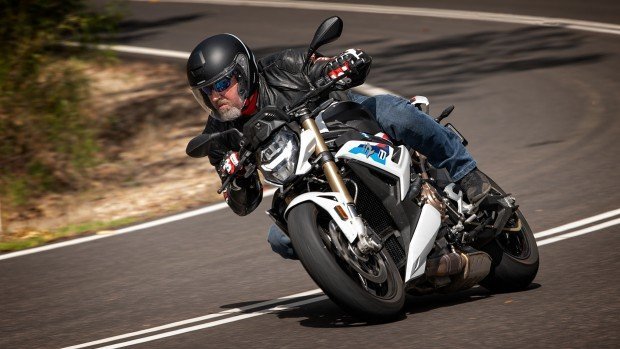 Why is Nick lying down again?

So it’s not trying to buck you off because your inputs have not been race-standard? So it’s not burning your leg and arse with its exhaust system? So it’s not crushing your nuts and cricking your neck with its crap seat and race-ergos?

That’s what makes it boring, is it? You are all sorts of strange, aren’t you?

Turn that thing on the right handlebar some more. Keep turning it until it’s not boring anymore.

If anything, I think it could maybe look a little more exciting. A little more exotic, evil, and savage. But that could be just a question of painting it matte black and sticking a crazy exhaust pipe on it, then not washing it for a year. In it’s red-white-and-blue livery it looks far too well-mannered and anodyne for what it is.

Because it’s a weapon. A very sharp one.

ALL THE MANY SPECIFICATIONS, ACCESSORIES, PRICES, AND VARIATIONS OF THE S1000R CAN BE FOUND HERE.