The Aprilia Tuono RF is one of those bikes.

It occupies that other echelon of motorcycles. It lives on another level, up where the air is rarefied and full of thunder.  Up where its tyres are always going to be costly sticky hoops of gooey liquorice.

Up where corners call to you and you always answer.

Up where you spend a lot of time looking in your mirrors in case they’re filled with flashing lights and prison.

Yes, up there on the top floor of the Fun House. I already knew this when I pulled over on the side of the Duckmaloi Road one warm afternoon, turned the ignition off, and walked stiff-legged from the ticking bike.

The Tuono RF was absolutely one of those bikes, alright. Magnificent, barking V4 bastard of a thing that it is. A true rider’s bike by any and every definition – and they are a rare thing.

My eyes were burning. I could feel my pulse clanging away behind them and my mouth was sandpaper dry. Behind me, the Tuono ticked on, cooling…or counting down. Or going “Tsk, tsk, tsk…” 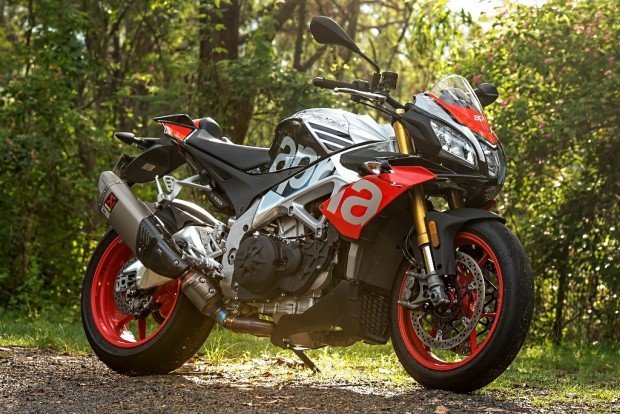 It’s looking down at you. 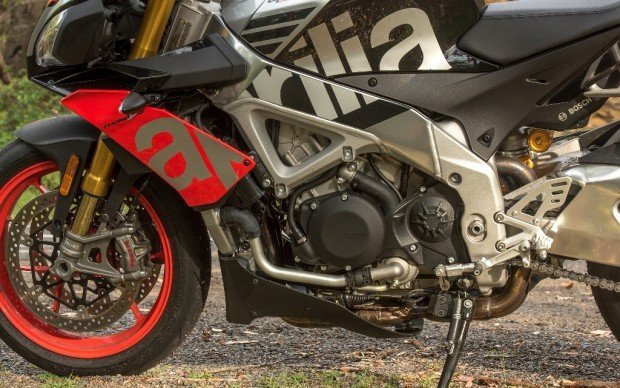 I looked out into the rolling countryside but I wasn’t seeing it. It’s pretty out Oberon way. But it’s also fast so I’m not usually looking at the scenery. Ride the Tuono with intent and the scenery is this grey thing with rapidly flashing green rubbish either side of it. This makes me the kind of crazy I like being. But then I have to stop, and so I did.

My mind was trying to comprehend what the Tuono had just put me through. Certainly, I had not put it through anything at all. I may have been on it, but it was the one doing the fancy stuff. And its stuff was very fancy indeed. Such precision (Its, not mine). Such confidence (Mine). Such assurance when it’s going really fast (we shared this, but it’s what the Tuono serves the rider). Such noise (Entirely its own. My eeping doesn’t count).

This is a stonking, thundering, hammering, assault of a motorcycle. It is brilliant and it is unforgettable. It is a dance partner for the ages. 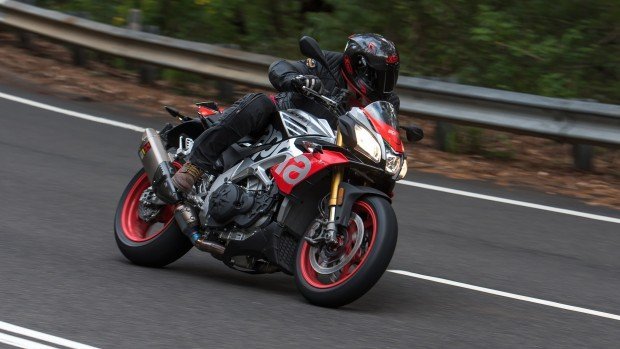 Garishly painted and glorious to behold.

So it is very much one of those bikes. Let no-one tell you otherwise.

This new and improved Tuono RF (F is for Factory) is one of the best high-stakes, shut-up-and-take-my-money naked motorcycles on the planet right now.

Is it as good as KTM’s King Daddy Super Duke R?

Now stop with the stupid questions. Because such questions really are stupid.

The better bike here is the bike you like the best. When the packages are this good, no other outcome is possible.

So the new Tuono is new for the following reasons…

It is more powerful. Substantially so. Moon-howlingly so, actually. This is not some bitch-kitty warm-over. This is Aprilia addressing the orange Austrian issue.

And all this bang lives inside one of the greatest handling packages ever created. The RF differs from the RR here because the RF gives you Öhlins NIX with an adjustable electronic steering damper (and a bloke with no idea could sure have some fun with that, huh?), and the RR is all Sachs. 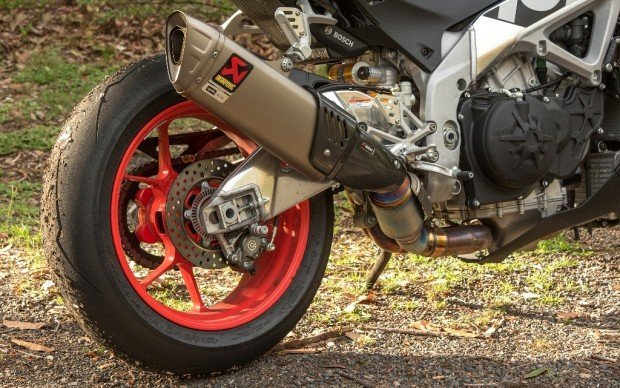 It’s just an amplifier for thunder.

The recent Tuonos have all been pro-level handlers – bikes able to provide even the most skilled rider with levels of control and precision numpties like me can only dream about. But then, when numpties like me climb on, those same levels of control and precision are still there, and suddenly the numpty is riding at another level. That is the real magic of bikes like the RF.

Essentially, none of this means shit to me.

And I’m pretty sure it means the same to most of you.

Very few of us ride at levels where such numbers matter. But hey, Jorge, if you can pick the difference in 0.4 of a degree of rake, more power to you.

So anyone who tells you the new Tuono RF is more agile, or more stable at speed, or turns in more sweeter, or fires more eggs out of its blurter, is full of crap. 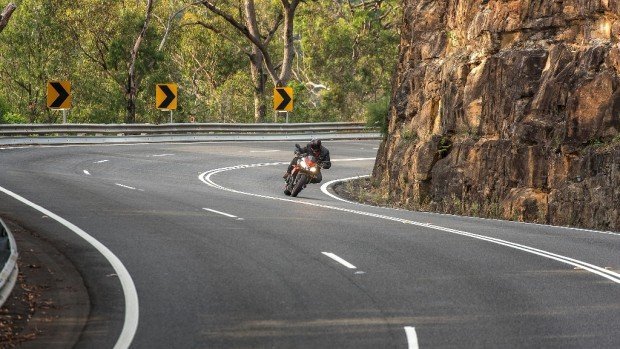 And so it goes…

All you need to know is this is one of the best-handling motorcycles ever made, sexy-fat 200 rear Pirelli Supercorsamegadragon and all.

And so it does Great Things.

And one of life’s Great Things is charging the Tuono Jesus-first into a corner, smashing down a gear or two, shifting your fat arse on the new comfier seat, dipping your shoulder, and then nailing that cheeky apex with symphonic thunder and surgical precision. Then doing it again and again and again…until you have to pull over and walk it off.

That was me on the Duckmaloi Road. Of course I had to stop lest I went mad and never went home. It’s times like that I wish I still smoked.

Around town, commuting, looking sassy for the girls and admiring yourself in shop windows, the Tuono is snatch-free, smooth and superbly well-behaved. Of course, you can always hear the tenebrous grumble under you, muted though it is at commute-speeds. It’s always there. It never lets you forget you’re riding the thunder…the tuono, as the Italians call it.

And it has the best power-shifter on the market today. The thunder and the power-shifter play a divine duet, one complimenting the other, up or down…it’s a joy – both to use and to hear. Shifting up, it makes the most marvellous ‘bang’ between gears. Like one of them MotoGP bikes. Almost.

Unlike other power-shifters, you don’t have to throttle off on the Tuono RF to change down. Yeah, I know. Voodoo. I did it over and over again in case it was an aberration. But it wasn’t. On a trailing throttle at 3000-odd rpm, just bang it down a gear. It makes a sexy noise and shifts smoothly down. Voodoo, voodoo, voodoo. All voodoo. So what else is better? Well, on earlier models, when I went to use the blinkers I sometimes used to snag the plus-minus buttons that sit inboard of the left grip and control the Traction Control electronics. Those buttons have been moved a touch, so my stupid thumb isn’t finding them by mistake anymore, so that’s good.

But there are lots of other electronics. All of them in fact. I don’t imagine there are any left at all. Wheelie control, cruise control, launch control, pit-lane control, ABS in a 1000 different guises (including Cornering ABS) and traction control in 10,000 different variants. And the ability to screw with it all via a dedicated Aprilia App – which works best when you have a few shandies with your mates and you all troop out to the garage to begin adjusting things like engine braking. Such fun. 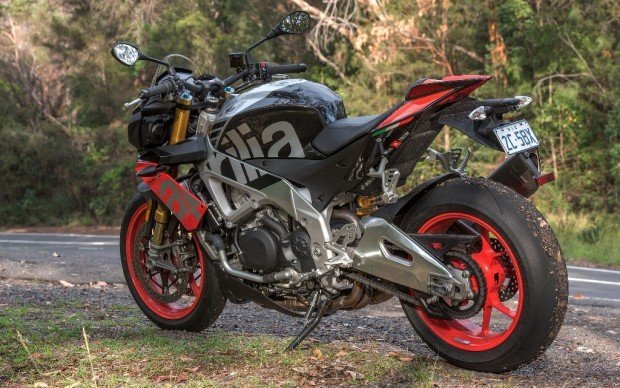 When even the swingarm means business.

For all intents and purposes, the Tuono RF is a naked RSVR Superbike.

Mine came with an Akrapovic can, and it sounded great. When the Highway Patrol guy is giving evidence at your trial, he won’t mention the exhaust being offensive, so that’s a good thing. But I have a mate called Res, who has a slightly older model Tuono. So it’s the underpowered, flibbertigibbet one. Res has put a “muffler” on his Tuono the size of a can of beer. When he gives it a handful, many of my organs begin to melt. Nothing on this planet opens your eyes wider than a V4 barking hate through a Red Bull-can-sized can. You should try it. The judge may tack a few more years onto your sentence, but it’ll be worth it.

The dash is gorgeous full-colour TFT, but because I am old, the menus and flipping through them is tedious and overly complex, the headlights work OK at night (but could be brighter LED units), the horn’s rubbish, the sidestand is now fine (it used to be an act of faith), the brakes are spectacular (front rotors are bigger at 330mm) and that tailpiece…yeah, I reckon it gives the MV Agusta F4RC unit a run for its money in terms of looks. Pillions can get a cab. That quilled masterpiece would never come off my Tuono. 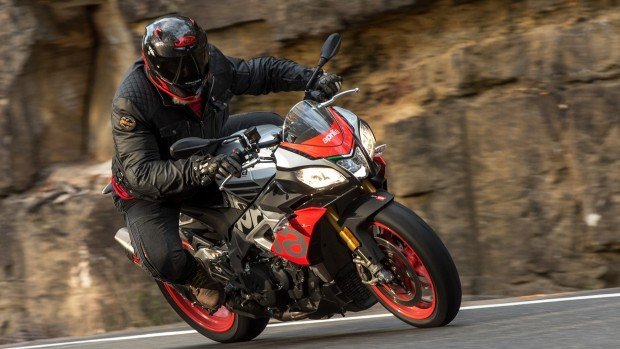 Back to looking at Jesus.

The level of finish (paint, decals, welds, etc) is very high; this is a premium motorcycle, so you would expect that.

It’s not uncomfortable to ride all day. But I wouldn’t be neglecting squats at the gym. The more muscle-meat you put on your thighs, the happier you’ll be in general, and especially after a long day in the Tuono’s saddle.

The Tuono RF is astonishing.

I rode it on the road and I rode it on the track. It amazed me in both scenarios because I lack the skill (and indeed the desire) to push it to the point where my enthusiasm overwhelms its electronics and I become a tumbling plough. The laws of physics can only be mitigated so much by an ECU.

But until that point is reached, and the voodoo no longer works, you’re going to dance with the devil.

And what a dance it will be. 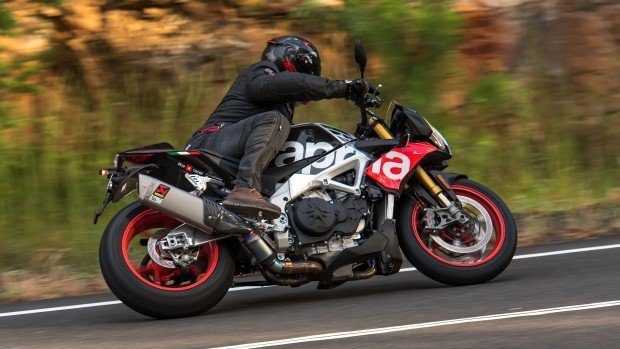 What are they flashing me for?

It’s that stupid one again isn’t it? The one that goes: Is the Tuono RF better than the Super Duke R, mister?

No, it’s not better. The Italian bike is not better than the Austrian bike.

But nor is the Austrian bike better than the Italian bike.

They are as splendid as each other.

Which one would I buy?

I would buy the KTM only because I prefer how it looks. Then I would live a life of weeping regret that I did not buy the Aprilia because I love that eye-drying V4 engine and the demonic noise it makes.

I would live in misery and remorse.

Of course, I could buy the Tuono RF.

But then I would forever beat myself up for not buying the KTM. There’s something about it’s hate-robot looks I love.

That’s the deal here. It is a situation that is simply defies solution. 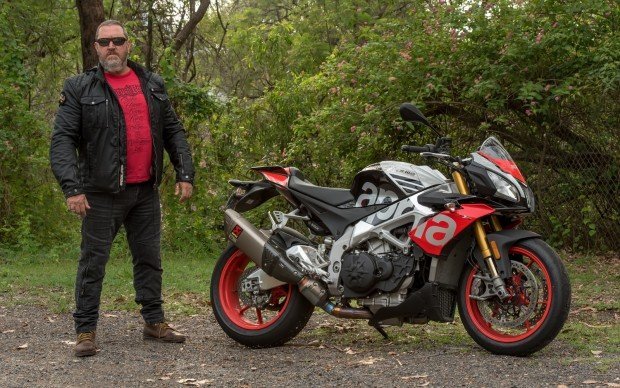 Ready to be Tasered.

The RF will cost you $24,990 plus ORC and the RR can be ridden away for $21,990. Spend the extra money, because you’re worth it. If you don’t, people will think you’re a cheapskate. You don’t want people thinking that.

You may admire all the specs HERE.