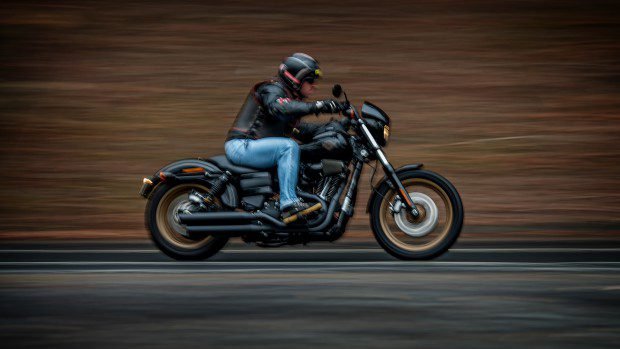 This is a nasty piece of work.

The 117-cubic-inch FXDLS (or Low Rider S if you can‚Äôt spell) is not so much a motorcycle as it is an act of primal rage incarnated in metal.

And I love it. 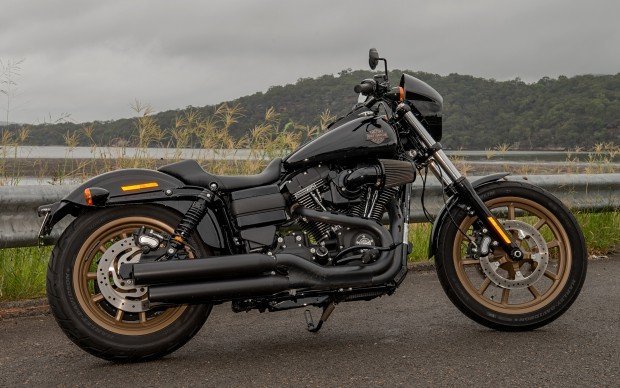 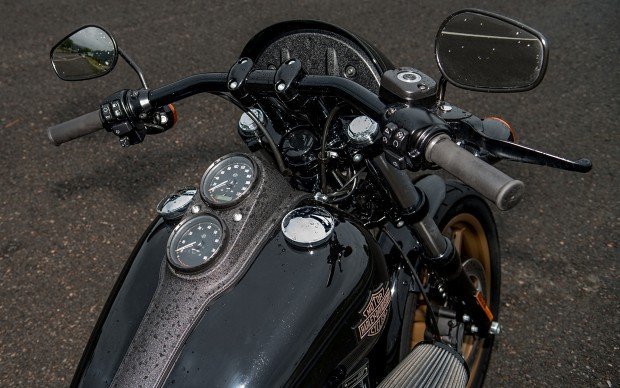 Can you see my tears? Just kidding. That’s rain. Promise.

I ride it and it makes me wickedly happy. Or happily wicked. I‚Äôm not sure there is a difference.

It makes me feel like the outlaw I once was, and still am from time to time.

An alcoholic is always going to be an alcoholic, but in order to save himself from himself he‚Äôs chosen not to drink anymore. But he‚Äôs still an alcoholic.

So this mechanical assault Harley has cooked up speaks to me like a bottle of rum speaks to an alcoholic.

But it‚Äôs not a quiet conversation of whispering and urging. It‚Äôs a guttural exchange of growling and daring.

‚ÄúGet this up ya!‚Äù it declares, backhanding you across the face like you‚Äôre some fresh-mouthed twat in need of guidance.

Everything about it is wrong. And hard. And mean.

And paradoxically, ever so bloody right. 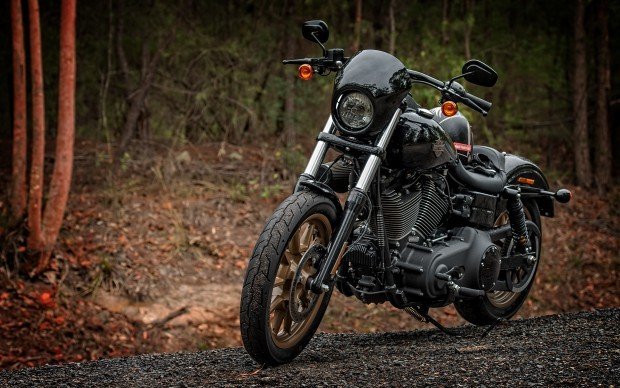 Nothing fancy. Nothing nice. Lots of darkness.

It‚Äôs black. Of course it is. It has to be black. Sure, the wheels are not black, but they‚Äôre not Jewish Racing Bronze, either. And they look better in real life than they do in pictures. But everything else is blacker than your ex-wife‚Äôs heart.

It pays the barest lip-service to cutting-edge technology. You get keyless ignition, cruise control and ABS. Oh, and self-cancelling blinkers.

Bah! We ride like men. Be grateful the brakes are adequate. But do mind yourself in the wet on the standard Michelin tyres. They‚Äôre reasonable in the dry (the ground clearance will keep you on them), but in the wet they will show you the face of Jesus if you‚Äôre ham-fisted with the throttle. 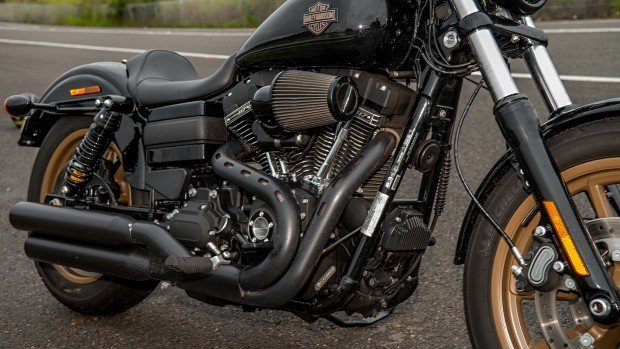 Give me all of your air.

That front-facing heavy-breather intake that sticks out the side of the engine is like an affront to niceness. It says: ‚ÄúI‚Äôm sucking air in here, bastard!‚Äù¬Ý And because your eye is drawn to it, you can‚Äôt help seeing that Screamin‚Äô Eagle 117 metallically tattooed on top of the engine case just behind it.

There is no sneezing at 150Nm of torque. There are just prayers of gratitude interspersed by lightning bolts of sheer terror and wild joy. 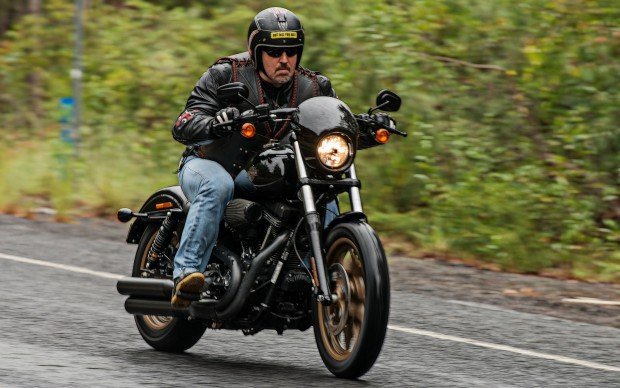 You can ride it around with your manners showing and it will rumble and grumble and occasionally spit some hatred out of its air-nozzle. Or you can man-up and ride like you mean it and it will roar and thunder and vomit steel-heated anger at the world.

The difference between the 117-cuber and the standard 110-cuber is huge. And it terms of return-on-investment, it can‚Äôt be beat. You can, of course, make a 120-cuber out of Harley‚Äôs vast parts catalogue (and maybe you should), but that‚Äôs a much bigger investment in dollars as well as time. This 117-cube ‚Äúkit‚Äù, if you will, doesn‚Äôt require the engine to come out of the bike. And as such, it‚Äôs the largest bolt-on kit you can get from Harley. For your buck you get the following bang: 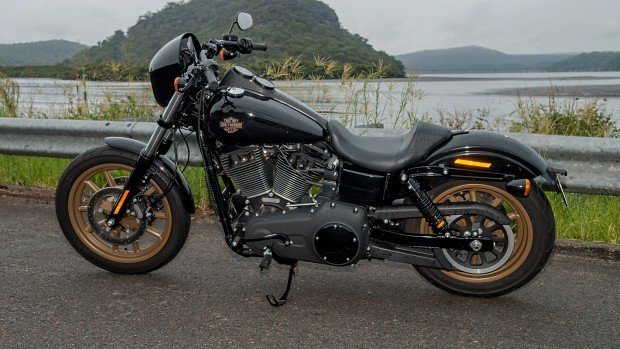 I kinda like the wheels. But it would look mental with black spoked rims.

So it breathes in better and it explodes petrol with more oomph. The difference is, as I said, startling. You should ride the 117 back-to-back with a 110 if you can. You will have no issue handing over the extra money. Even if you leave the pipes stock (and why would you?), there‚Äôs also definite aural edge to the bigger motor.

The actual riding of it all is a bit unhinged, which is fantastic. 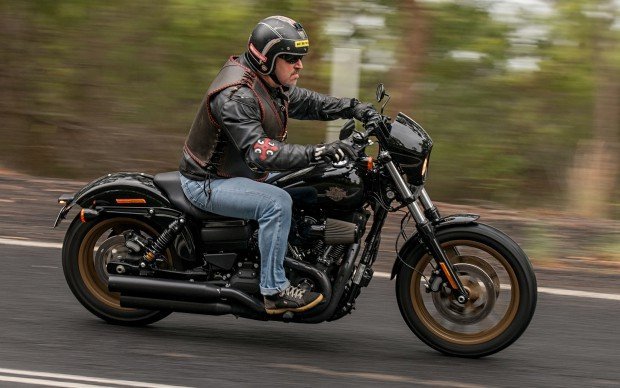 It was a greasy old day up on the Old Road. 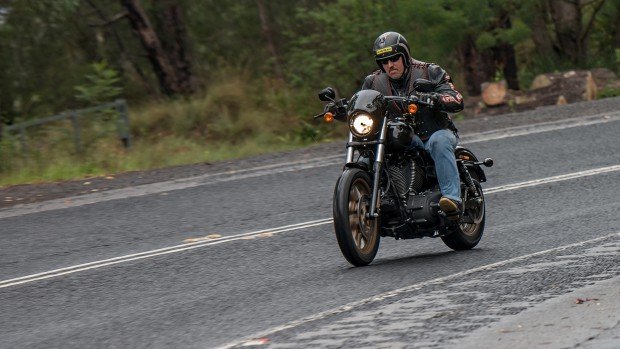 It‚Äôs not comfortable. And that‚Äôs fine. Because it‚Äôs not uncomfortable, either. The seat is firm and the riding position is fraught and feral. I felt like one of those ninjas jumping off a tea-house. My knees were high, my toes pointed up and my arms were wide and pretty much straight out in front of me. It‚Äôs a tactical fighting posture for ninjas, and it‚Äôs perfect for riding the Low Rider. It‚Äôs just not comfy like an armchair is comfy.

But men do not ride armchairs into battle, do they?

Is a warhorse comfortable?

It is therefore right, is it not?

And like a warhorse, the suspension is not going to love you up any either. What it‚Äôs going to do is wham your soft bitch-bits into firm man-parts and make you pay attention. It‚Äôs adjustable at the back and it‚Äôs better than it‚Äôs been on previous models, but it‚Äôs still like a Viking assault on an English village ‚Äì exciting and pitiless in equal measures. Do not ride with your teeth clenched. Ride with your mouth open and a war-cry in your throat. 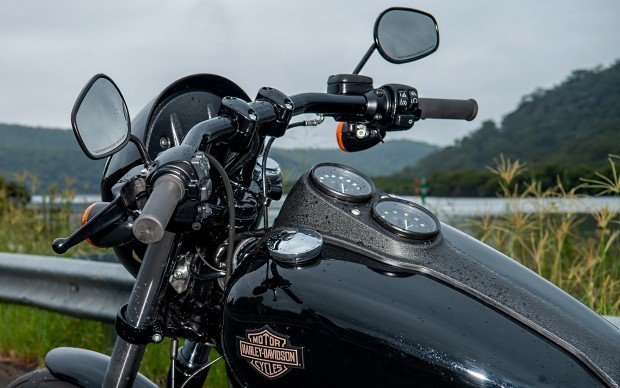 I like the little fairing around the headlight. It doesn’t do much. But it looks cool.

You can‚Äôt really see the dials until you drop your eyes off the road, so they are obviously superfluous.

Whatever speed you‚Äôre doing at whatever revs you‚Äôre making is the right speed and the right revs for that occasion. It‚Äôs the kind of bike you can actually ‚Äòfeel‚Äô your way along the road with.

At idle it shakes and grumbles and you can smell it baking oil ‚Äì which if I were you, I‚Äôd be changing pretty regularly. Big-bores like oil. It makes them smile. It doesn‚Äôt smell of burning grease like my old Shovelheads did, but it does emit a wonderful primal odour that lets you know it‚Äôs enjoying the old dinosaurs you‚Äôve fed it very much.

I even love the fact it‚Äôs got limited ground clearance. One look at the mid-mounted footpegs will tell you they are a disposable item.

Good. They should be. You will be disposing of them and getting new ones frequently.

I wouldn‚Äôt care. I wouldn‚Äôt even give it a second thought, because it doesn‚Äôt matter.

All that matters is how impossibly awesome this 117-cubic-inch lump of primal wrath makes you feel. 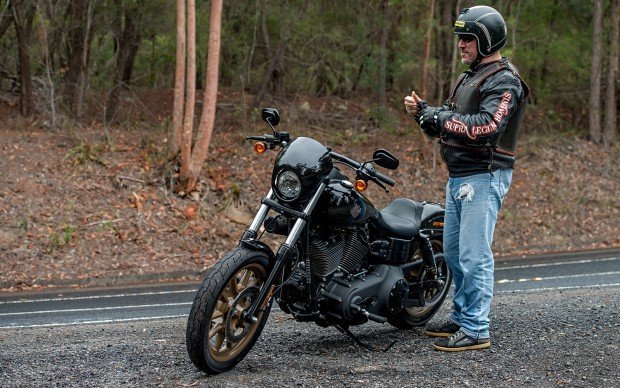 “Did you get that? I was completely sideways.” “No, I missed that.”

Thus it is a joy to ride. A shadowy, demonic, price-exacting joy to be sure, but a joy nonetheless. Slam that throttle open in third gear and you will feel every damn one of those glorious Newtons churning through you. Watch that speedo needle point at silly numbers (for a Harley).

The Milwaukee Eight engine is smoother, more refined and addresses, according to Harley, what its world-wide customer base is wanting today.

This engine is not that engine. And I really hope Harley never stops building this engine, and just keeps making bigger capacity versions of it.

Because this engine is the last buffalo. The last glorious, thundering, uncivilised and unrefined hate-bison in a world that‚Äôs convinced itself that is somehow wrong.

But it‚Äôs not wrong.

The world is wrong.

Precisely because this Low Rider S is what it is and does what it does, is why I love it. 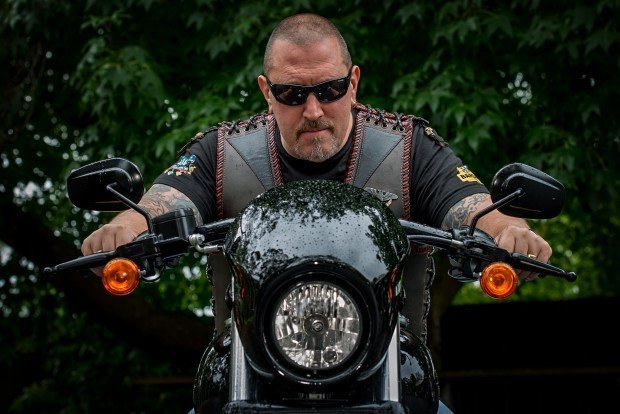 It‚Äôs a barbaric meat-eater dressed up in a smooth black killer‚Äôs suit ‚Äì and because it is that and doesn‚Äôt pretend to be anything else but that, is why I‚Äôm chubby for it.

When there‚Äôs evil in the air and thunder in the sky, this is what you need to be riding.

You want to sit on the Iron Throne?

You have to pay the Iron Price.

And it‚Äôs worth every single damn cent. 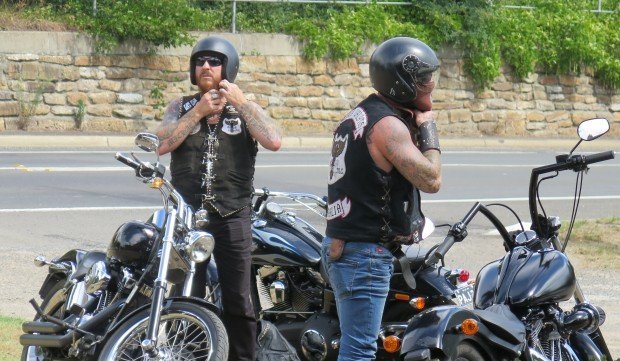 A LITTLE BIT OF OUTLAWRY

To make sure I wasn‚Äôt mistaken in my views about the Low Rider S, I took it down south for a ride with the Black Uhlans MC.

I have spoken about riding with outlaws before and you may read about that HERE and HERE.And I guess if you want to see how well your Harley works, the best way to find out is to take it for a ride with an outlaw motorcycle club.

Sean has sticky tyres on his Wide Glide and far more ground clearance than me. He also rides faster than I do.

Both of them have the view that the more you grind off your bike, the more ground clearance you will have for future corners. This was not a discussion I wanted to have with Harley when I returned the bike, but I have always shared that view.

Both of them liked the Low Rider S very much and Kev went so far as to declare actual love for it, but felt it would need forward controls fitted for bigger blokes.

It can, however keep Reggie‚Äôs thundering VRod in sight at redline in top. Can‚Äôt pass it. But can see it.

My thanks to the Black Uhlans MC for their hospitality. 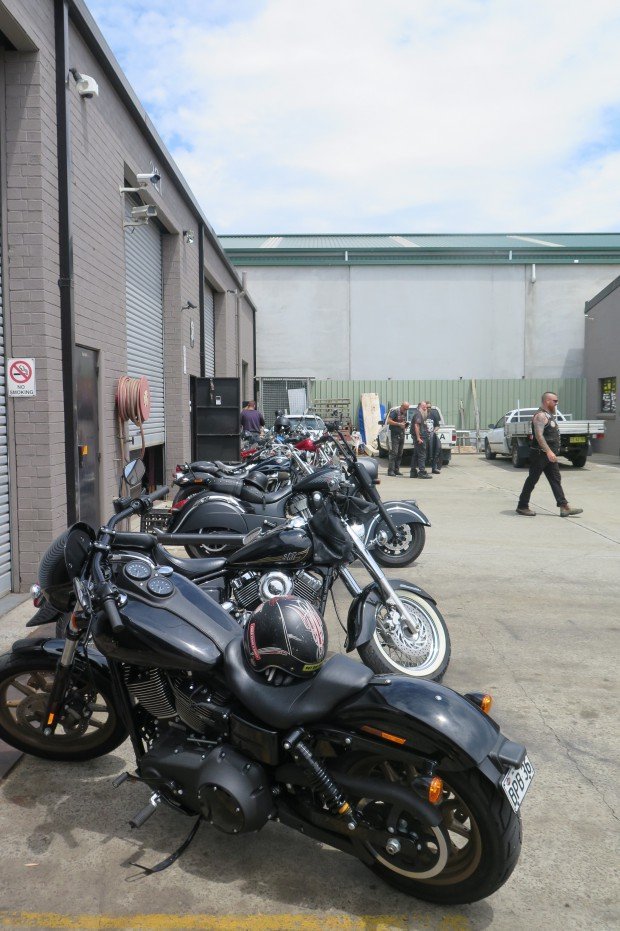 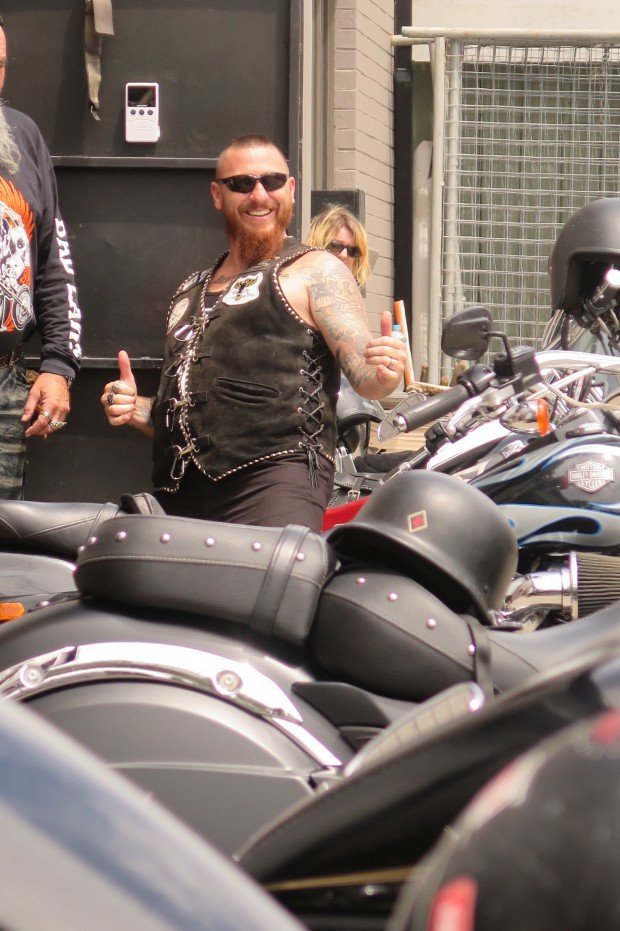 Kev is ready to race. 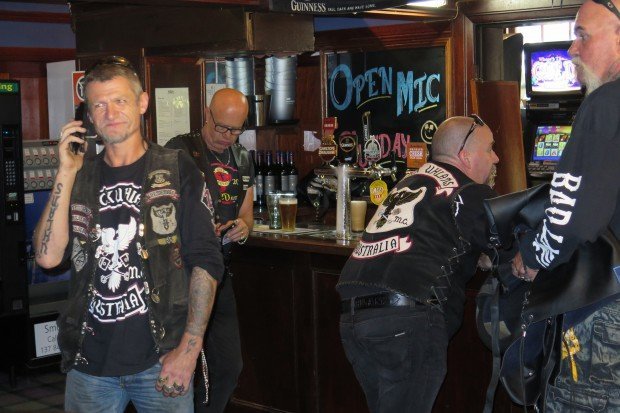 Sean, probably fielding a call from Repsol offering him sponsorship.

More details can be found HERE.

Once again, thanks to Nick Edards for the photography. His work can be found HERE.

2021 HARLEY-DAVIDSON PAN AMERICA ‚Äì THE LESSON OF THE GUN →