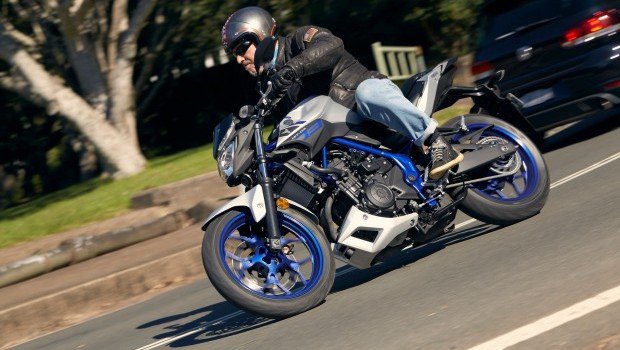 Getting the middle-aged men of the Australian motorcycle press corps to review Learner Approved Motorcycles (LAMs) is an exercise in hilarity.

Our Learner Days are eons behind us. We are cynical, jaded and need to stop and pee a lot. We tend to view the relatively low-powered LAMs bikes as toys for the amusement of children, and so we end up riding them like cackling teenagers with chafed genitals.

And having the time of our lives as a result. 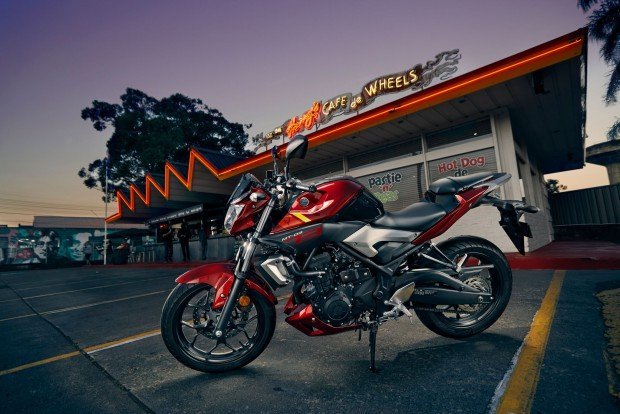 This is the red one. 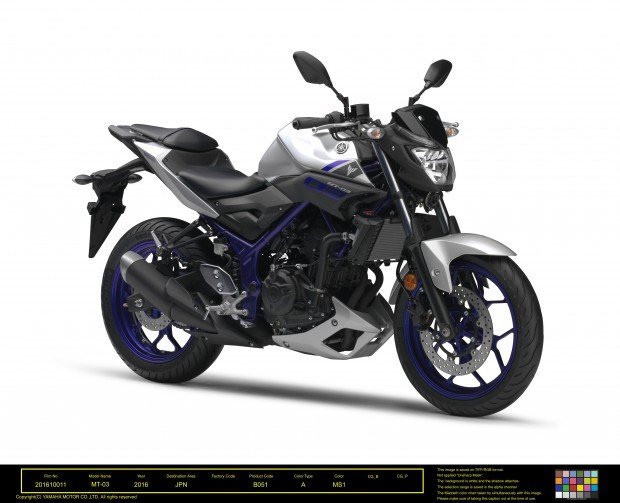 This is the artist known as Blu. 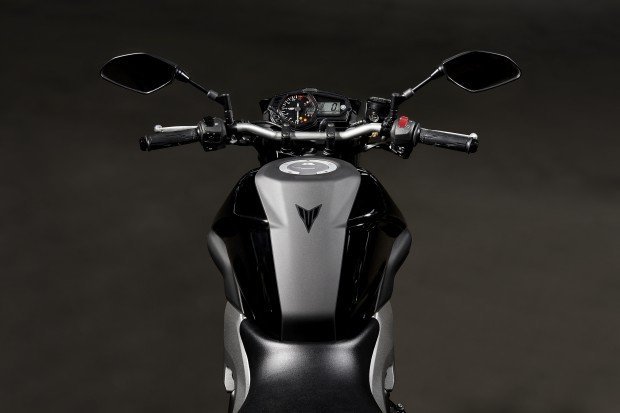 It really is rather shameful.

The only truly positive thing in our favour, and one that separates us from Learners, is that we tend not to hurl the test-bikes into trees very often.

I am especially circumspect in that regard. I have broken an elegant sufficiency of myself in recent times. I require no repeats.

But in every emotional sense, I am just as deranged as any sugar-freaked teenage rider, and probably more so because my credit cards have higher limits. 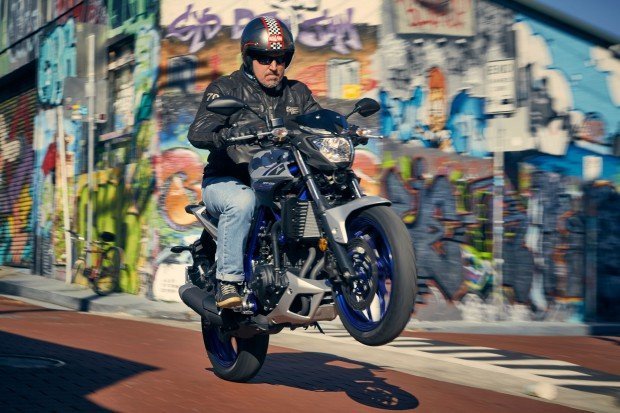 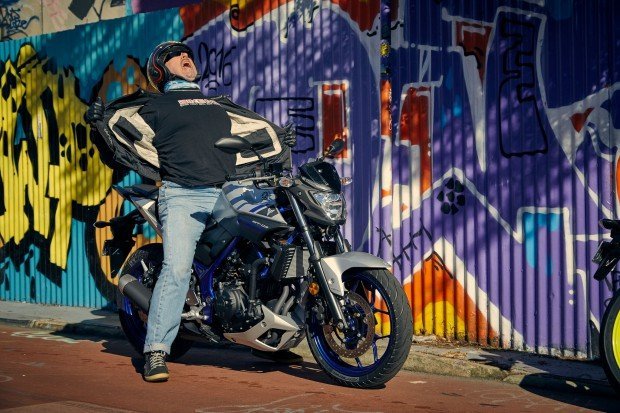 My challenge on the press launch of the 2016 Yamaha MT-03, the latest addition to the burgeoning and hugely successful MT range, was thus manifold.

Firstly, since I could not survive the shame of firing a LAMs bike into one of Nasho’s (Royal National Park) protected eucalypts, I was resolved not to do this.

Secondly, I had to get into the Red Bull-fuelled mind of Learner, and try to see the bike from his altogether narrow and largely motorcycle-ignorant perspective. 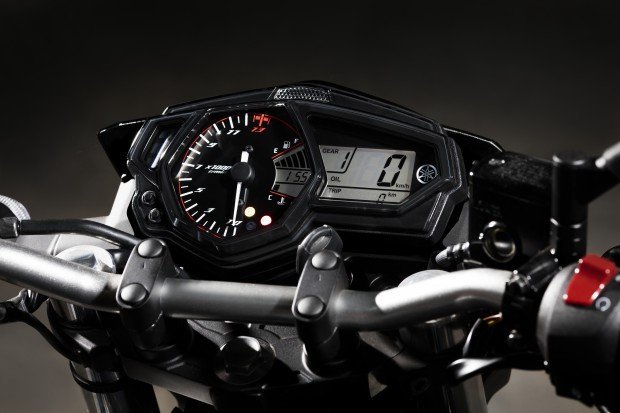 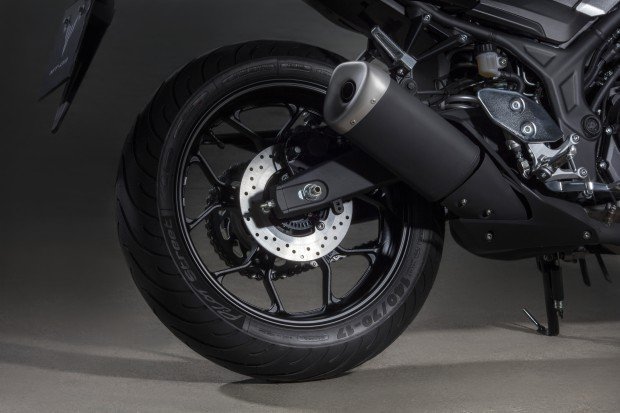 Learners will be pleased to know there is an Akrapovic can that goes on here. The rest of us, not so much. 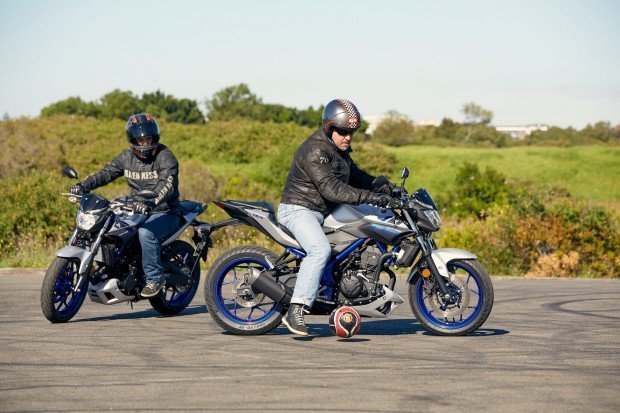 We found a ball in a car-park and played soccer. No, seriously. 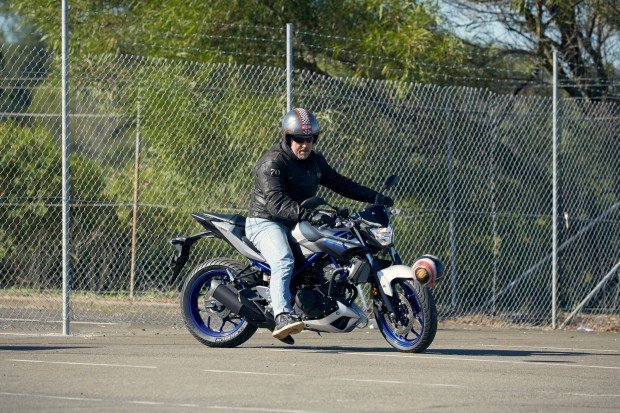 You got nothin’, Messi.

What would he want from his new bike? What would tick his pimply boxes and cause him to flood his Facebook timeline with pictures of him and his bike being all savage, ruthless, fresh, and YOLO?

Was it holding the MT-03’s eager 31.Kw 321cc engine wide open as he chased a middle-aged man through Nasho?

Would it be the bike’s willingness to wheelie in a controllable and non-terrifying way, so the delighted panties of overwhelmed girls fluttered in its one-wheeled wake?

Could its agility in traffic, its runway-model thinness and its excellent delivery of 29.6 Nm of torque (helped by a 780mm seat-height) be a factor in a teenager’s mind? It lane-splits like a demon, and while I know L-platers are not permitted to do this legally, I’m also of the view they should be doing it to keep themselves alive. The MT-03 weighs a mere 168kg wet, which is four kilos more than I once bench-pressed, so it’s power-to-weight ratio is most pleasing. 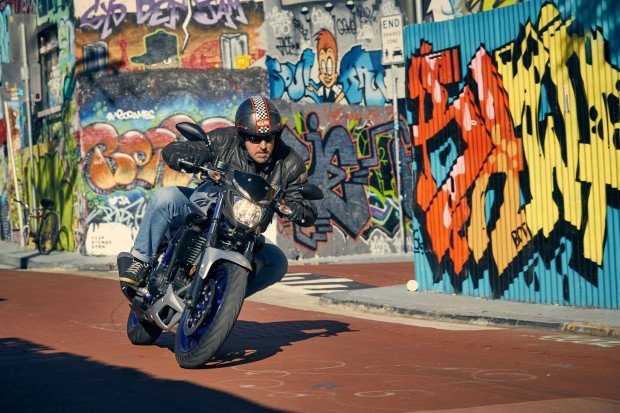 Corner really hard on the slippery bricks, the snapper said. It will be fun, he said. 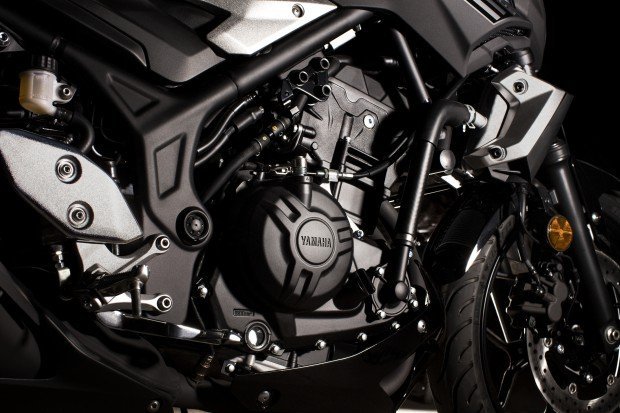 Was it the fact that it appears to use no fuel at all as it gets about its business? And is great economy a consideration for L-platers?

Is its ability to do miles in relative comfort and at decent speeds (yes, you can overtake trucks that are doing 110, provided you down-change far enough) something a newbie would consider? That tank holds 14 litres, which would either see maybe 30 laps of the Old Pacific Highway, or see you into Bathurst, where you could ride the Mt Panorama race track like a salty Boss.

Or is it the MT-03’s ability to carve corners like an old country butcher dressing a lamb is what would appeal to beginners? Most of them certainly can’t ride for shit, and would doubtlessly benefit greatly from a bike that is wonderfully competent and poised in its cornering. It would forgive you your L-plated trespasses, of which there will be many. That quality alone separates the MT-03 from many of its competitors.
But practical considerations need to be placed to one side for a second. After all, motorcycles are not practical. The buying of them by hyperventilating teenagers is not based on practicality. 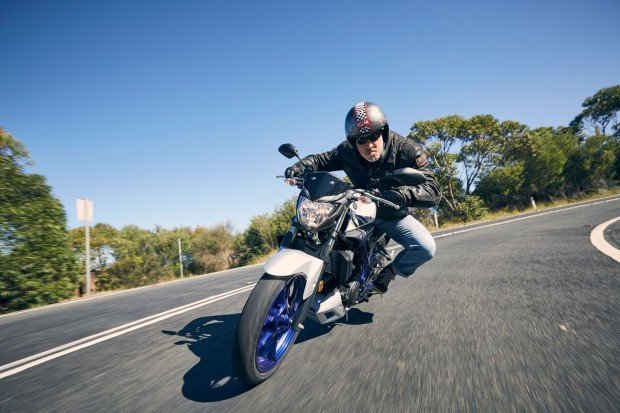 “If he puts his brakes on, I’m well fucked.”

It is based on coolness.

In that regard, nothing has changed from my time as a teenager.

I did not want anything to do with practicality and common-sense back then, and still don’t now – though I will happily tell you about the beautness of hard luggage on long trips.

I have always wanted the coolest motorcycle I could get, so I could be cool by association with it, and then girls would have sex with me.

Yes, I am that shallow.

And I was a fairly typical teenager in the regard, and back then, the coolest bikes tended to be the ones that killed you the quickest.

Today, for reasons I am not entirely clear on, we want our teenagers to survive their teenage years. So for the most part, we start them out on gentle, friendly motorcycles, most of which are tepid as old tea and boring to ride.

The MT-03 is quite the opposite. It is not at all tepid, but it is friendly and easy to ride. But it’s friendly like that friend who always has great pills in his pocket, knows where all the nasty girls hang out, and won’t shop you to the cops when things go pear-shaped.

There’s an edge to the MT-03. There’s a glint to it, like the flash of a blade under a streetlight. 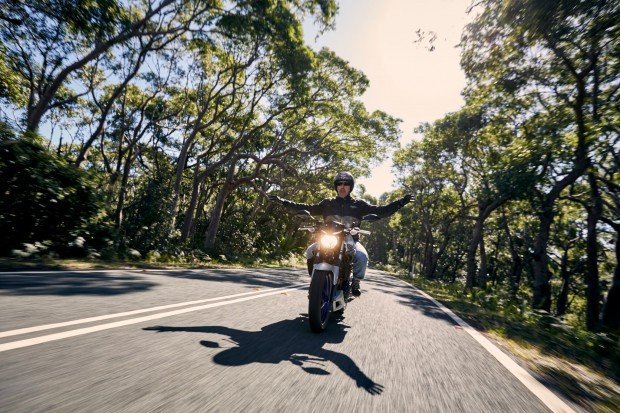 Basking in the love of Jesus.

It certainly looks the business, and as one’s riding skills increase, it will also go like the business. It certainly gets along in a way one’s parents would strongly disapprove of.

I found a wonderful integrity to the MT-03. It behaves like a proper grown-up’s motorcycle and looks like a hooligan’s brass knuckles. It’s not complicated. There are no engine maps and there are no lean angle sensors or traction controls. There are no heated handlebar grips. Teenagers need none of them. But there is ABS, and that is a great and good thing.

After chasing former AMCN editors around Nasho, while stopping every now and then for pictures, one of them grinned at me and said: “I would love to take this up the Old Road (Old Pacific Highway).”

I grinned back at him. “There would be many tears and much weeping among the race-leathers crowd.”

Then we laughed, and started chasing each other on the road again. 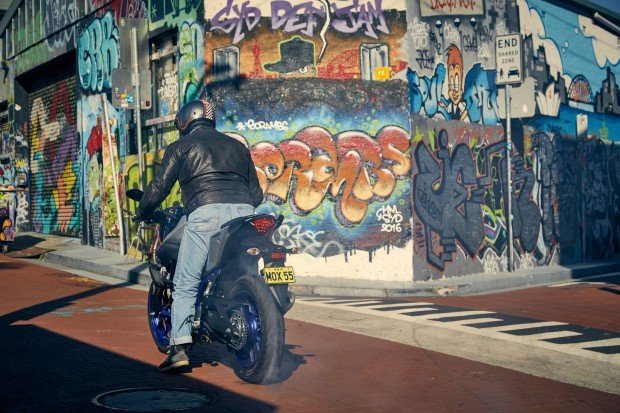 Smoking was permitted, but only briefly.

HOW MUCH IS IT?

WHAT COLOURS DOES IT COME IN?

WHAT ABOUT THE COMPETITION?

There’s the KTM RC390. It’s a single and it’s harsh, zesty and rather brutal for impressionable children to learn on.

There’s the Kawasaki Ninja. It’s 299ccs in a place where size is important; the MT-03 is 321ccs. Yes, the small difference is noticeable. There’s the Honda 300F. It’s a single-cylinder.  And then there’s Honda’s CB500, which is a twin, but rather pfaffy in its go department. So there while there is choice in this segment, the MT-03 shines quite brightly.

WHY DOES IT WORK SO WELL?

It’s got the same engine, frame, suspension and wheels as the brilliant YZF-R3, and a sexy asymmetrical swingarm kinda like an R1. The ABS brakes (298mm on the front and 220mm on the back) offer good feel and stopping power for its weight, and the whole package is extremely well-balanced.