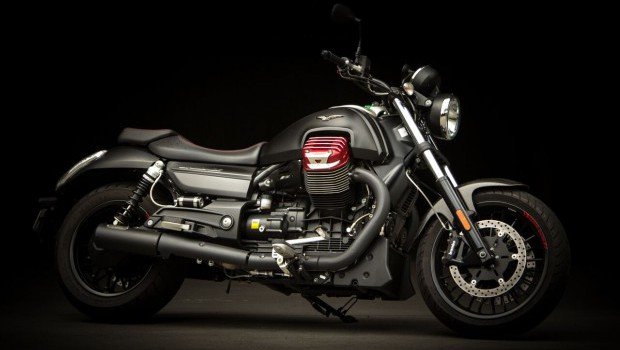 My brother, Bother Silverback, once declaimed that “Every man must own a Moto Guzzi at least once in his life”.

And this is true. To combat the vagaries of the world, a man must bear the scars of struggle. He must be annealed by strife and forged by conflict.

War was good at this. It either killed you, made you crazy, or you emerged from the other end made anew.

Owning certain motorcycles has had much the same effect on men.

Moto Guzzi was one of these motorcycles. 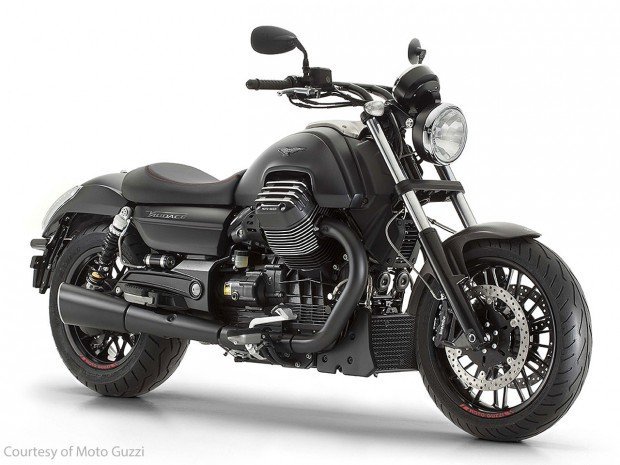 This is the standard Audace. 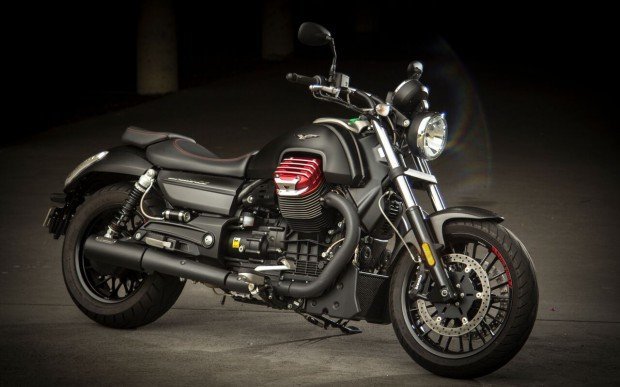 This is The Godfather Part One.

Certainly there have been others. Harley’s Shovelhead, for example. Anything made by Ducati before 1990 was also right up there. And then, as the British bike industry faded away in the years before Mr Bloor would resurrect the Triumph, there was all them pernickety Pommy jub-jubs.

But Moto Guzzi took a back seat to none of them.

You had to be committed to own one.

For your commitment, you were party to one of the most aesthetically beautiful engines ever built, and one which delivered a note that fired the blood and tingled your gentleman vegetables. It also handled and stopped, but had electrics from the time of Christ and a gearbox made from the off-cuts of fascist battleships.

Moto Guzzis certainly challenged you, but have always been wonderful, unique and edgy motorcycles. When they were working properly, they were divine, but since that didn’t happen all that often, they were bundled into the bin marked ‘stuff with character’. They became the province of brand enthusiasts and people with mental illnesses, who were usually the same thing. 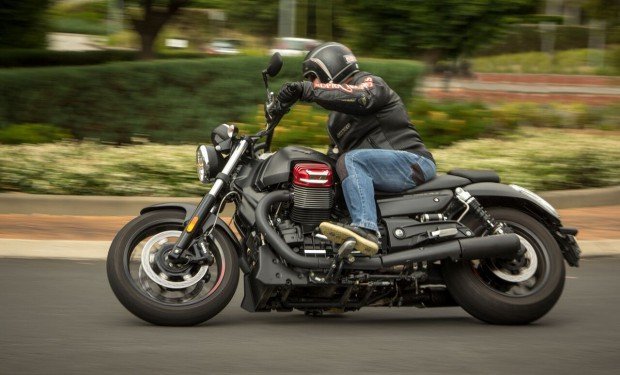 Then came the resurgence and the renaissance.

In 2004, Moto Guzzi became part of the Piaggio empire, and over the next few years began to churn out bikes that while being utterly true to their rich heritage, were now also viable players on a motorcycle stage that was making vast leaps forward in technology and sophistication.

I still hold the Griso to be one of the finest motorcycles I have ever ridden. I am also enamoured of the stunningly rideable and gorgeous California, and have done lots of miles on one. Hell, it even got me booked on the Snowy Mountains highway a few years back, but because it was a Moto Guzzi and because the policeman had one in his shed, my 52km/h over the posted limit became a 10km/h over ticket and some happy snaps.

The Eldorado (my time with it can be read HERE) and the exquisitely grim-looking Audace.

I did a video review of the Audace HERE, and resolved to do more.

After all, this bike was a complete aesthetic departure from Moto Guzzi’s usual offerings.

At its core, it shared nearly all of the Eldorado’s hardware. Same engine, same frame, and same gearbox. But it differed in significant ways. 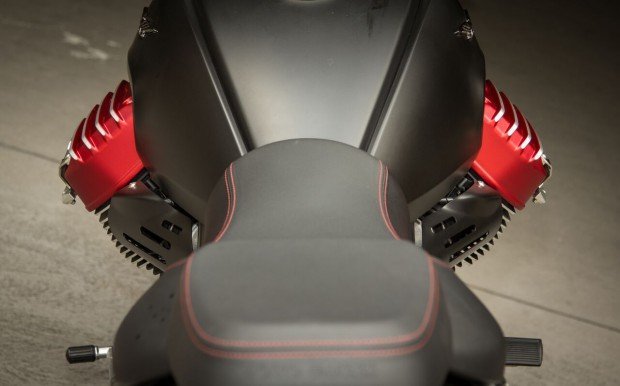 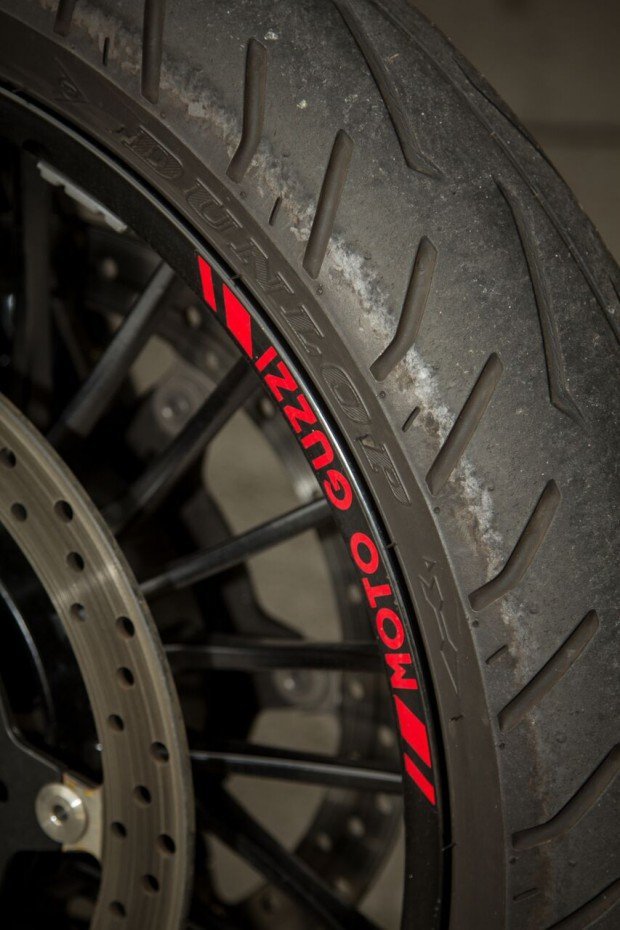 People will ask you what kind of bike it is. Point to the wheels.

There were no footboards. It had pegs. The riding position canted you aggressively forward. The front wheel was an 18-incher rather than the 16 found on the Eldorado, and the back tyre was wider. It was lighter (299kg versus 314), and, most importantly, it was painted matte black. It was one of the most visually captivating motorcycles I had ever seen.

It was no longer a cruiser. People who say it is are ignorant about what constitutes a cruiser, for the Audace is no such thing.

Ask the blokes on fired-up Harleys who tried to drag-race me off a dozen red lights on the way back from the Bankstown Bike Show. After losing badly each and every time, one of them pulled up next to me and demanded to know how many cubic centimetres had been handing him his thundering arse for the last four kilometres. 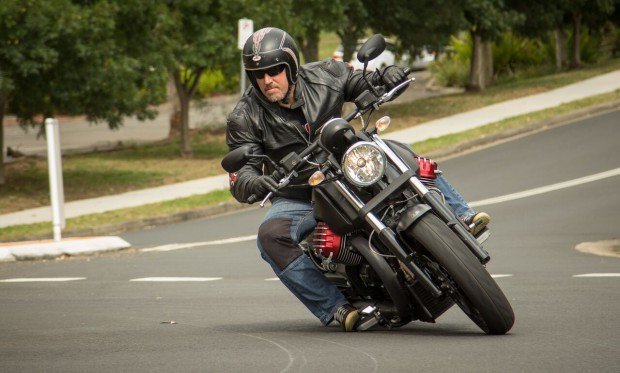 Same thing happened in some twisty bits the following weekend, and I was later questioned by the Dainese-clad scratchers who could not shake me off.

“Is that a Guzzi?” one of them asked.

“That explains it,” he smiled ruefully. “Goes alright, huh?”

“It sure does,” I smiled back.

I was smiling a lot each time I rode it. Of course, I stopped smiling for the photos, but on the inside I was as happy as a box of birds.

The gearbox is wonderful. Seriously. 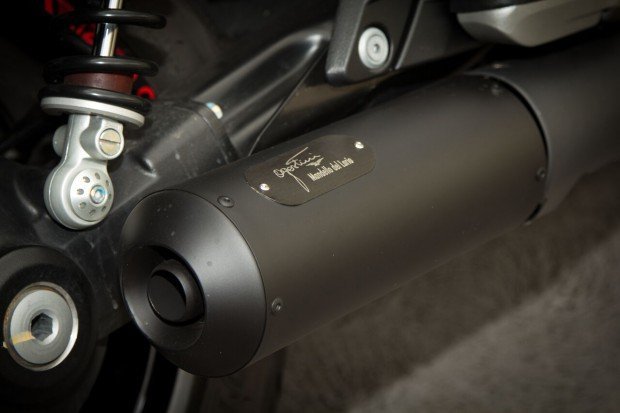 The Great One rides with me. But them baffles… 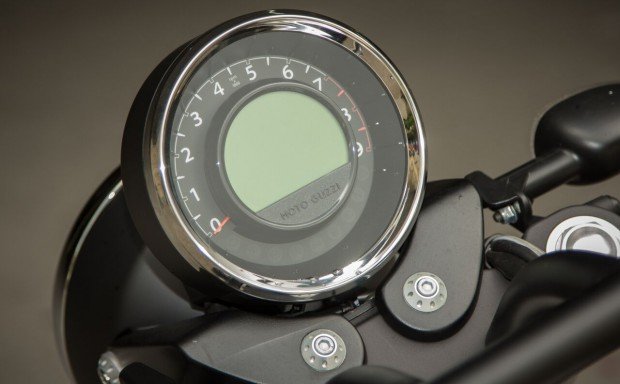 Simple, informative and you can have it read in Italian for the full continental effect. 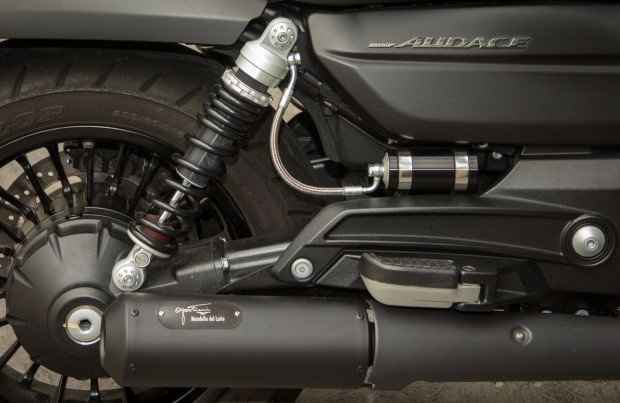 These fully adjustable jobbies are better than the ones on the Eldorado.

Once upon a time, Guzzi boxes were like a bad joke. There were lots of gears, lots of neutrals, and you eventually found all of them. It was great fun laughing about it all in the pub after the ride.

And while the bike still retains that magical sideways thrum on start-up and shakes like a cage-dancer in a nightclub at idle (please note that this is not a bad thing at all. If you think it is, then you haven’t seen the cage dancers I have), it is butter-smooth to ride.

It’s all backed up by top-notch electronics, rider aids, engine maps and a quality of build that is world-class.

But it’s still got that special Guzzi mojo going on.

So this brings me to the Audace you see here before you.

I have dubbed it The Godfather, for it is every bit as menacing, gravitas-laden and loveable as Marlon Brando is in Coppola’s first film.

And like the film, this Audace will have several sequels.

This is Part One.

You will notice that this Audace has red rocker covers, a new set of pipes branded by Agostini, and some sexy-looking silver jewellery that crests the outside of the red covers.

This is all genuine Moto Guzzi bling. And there is lots more of it. And we shall get to it in the fullness of time.

But for the moment, we have the aforementioned bits. 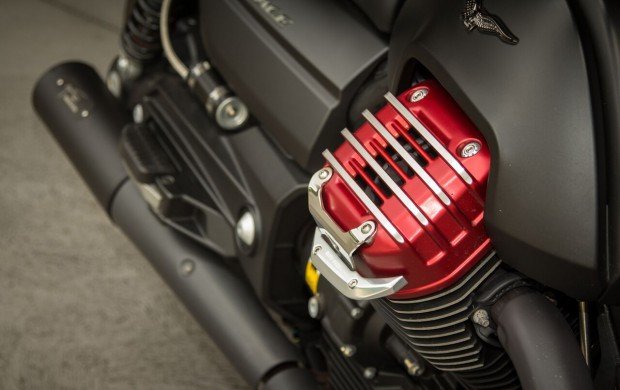 Firstly, the red heads are a great counterpoint to the unrelenting blackness of the whole bike. I love unrelenting blackness, but I very much like how the red rocker covers now make that hell sexy engine the focal point. The silver bits on the outside of the heads look like jewellery, but are there in case I decide to lie it down and don’t feel like buying new engine parts. No, I shall not be testing their efficacy out.

Then there are the pipes.

Like any standard bike, the Guzzis all come over-muffled. Rare beige Arctic walruses derive some benefit from this over-muffling, but they are a long way from where I am. So I don’t care. 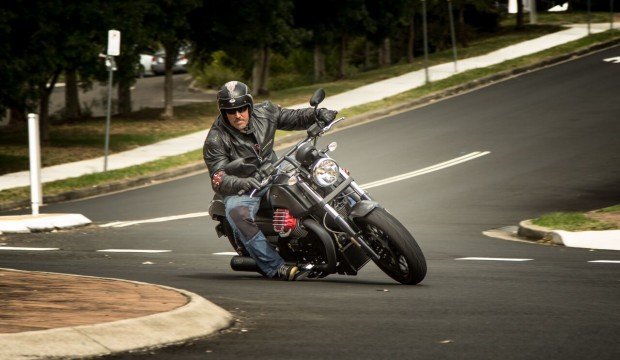 If I do it enough times, I’ll get it right eventually. 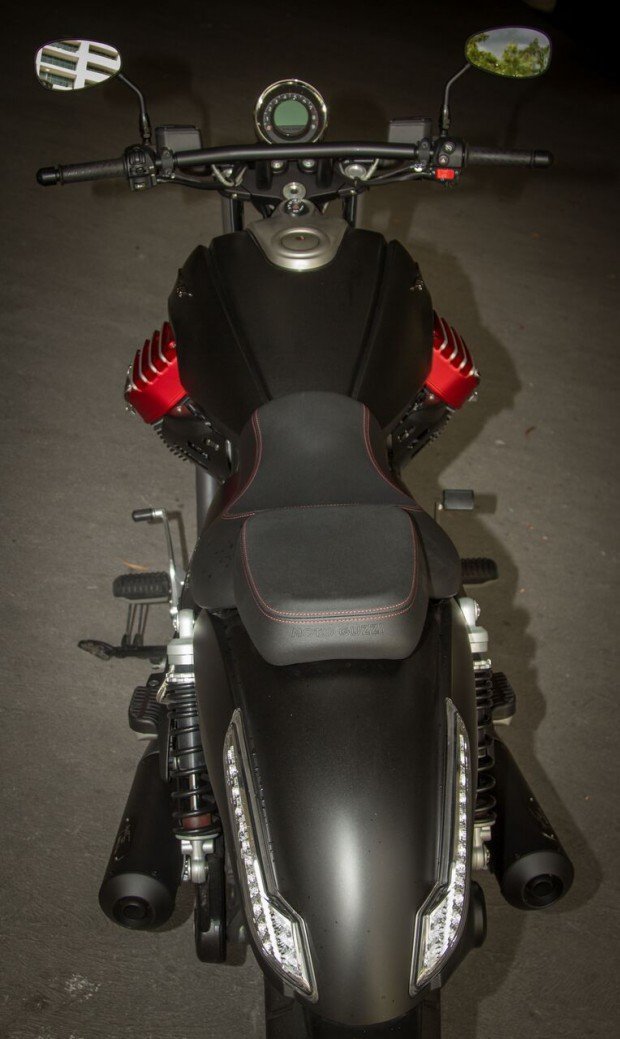 The lines are simply lovely. 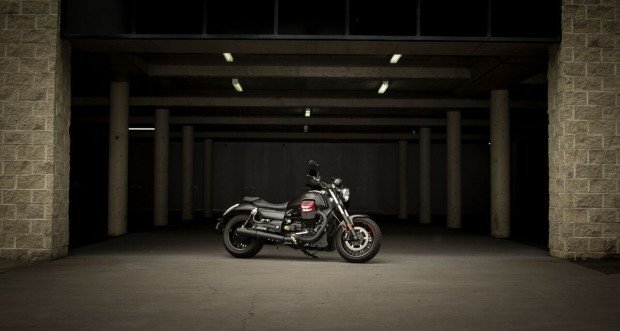 A Guzzi has to sound like a Guzzi or else what’s the point? A Guzzi that is painted matte black and boasts hot red lingerie with silver highlights on its boobs, does not dare sound like doona being fluffed.

Marco, from Moto Guzzi, and I had a discussion about the pipes after they were fitted.

“There are baffles in these pipes?” I said, peering into the openings.
“Si,” he said. “Baffles.”

“Si, they come out. But is very loud then. You cannot hear the musica of the engine.”

With the baffles in, the bike sounded great. It popped and banged on over-run and made a deep thrumming noise when I got enthusiastic, but…I like noise.

I would ride the bike around for a while with the baffles in, then as the transformation progressed, the baffles would be taken out and Marco and I could have a discussion about ‘musica’.

Either way, the new pipes are way better than the stock system, both in terms of looks, weight-saving, and sound.

The bling that is available for the Audace is extensive.

And in the coming weeks, you’ll see just how hot my new Italian girlfriend, The Godfather, is gonna look.

WHAT DOES THE BLING COST?

You may see more of the Audace, as well as all the other Moto Guzzi models HERE.